You are in : All News > Hold your liquor: Nutritional bar slashes alcohol absorption in half

Hold your liquor: Nutritional bar slashes alcohol absorption in half 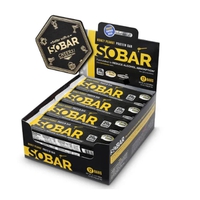 27 Nov 2019 --- SOBAR, the world’s first food specifically designed and clinically evaluated to reduce alcohol absorption, can slash absorption by half. This is according to the findings of a new clinical study using Zeno Functional Foods’ protein bar. The trial demonstrated the bar to be about twice as effective per calorie than the other foods tested in reducing alcohol absorption. The trial was conducted by a leading independent laboratory in Toronto, Canada, INQUIS Clinical Research and published in the Journal of Medicinal Food. Despite the nutritional bar’s properties, however, the company advises that consumers should drink alcohol responsibly.

“The bar is a combination of high concentration milk protein and insoluble oat fiber. SOBAR works by transiently delaying gastric emptying and if eaten before alcohol is consumed, slows the passage of alcohol into the small intestine. By ‘holding’ the alcohol in the stomach, much of it is inactivated by the alcohol dehydrogenase in the stomach lining (gastric 1st pass metabolism),” SOBAR Founder and President Dr. Joseph Fisher, tells NutritionInsight.

“The ingredient combination that does this with high caloric efficiency is called Alco-HOLD, for which we have submitted a Patent Cooperation Treaty (PCT) patent application,” he adds.

Alcohol reduction has become a key platform in the “balancing act” trend that the food and beverage industry has been addressing for several years. Consumers are looking for ways to eat and drink more healthily and “light,” yet still enjoy what they love. A recent Innova Market Insights survey (US, UK, France, Germany, China and Brazil) revealed that one in four consumers have cut down on their alcohol consumption in recent years. Offering solutions that are lower in alcohol but still full of flavor and experience was on-trend throughout 2019 and is expected to extend into 2020.

“This research project started after I had too much to drink on an empty stomach at a wedding,” says Dr. Fisher. “After that experience, I thought that there was a huge need for a specialized, low-calorie snack that could efficiently and effectively reduce alcohol absorption.”

“SOBAR can both tap into the sobriety trend as well as the alcohol reduction trend. For starters, it is educational. Our market research found that 40 percent of drinkers think that eating a 200 calorie snack before drinking will not reduce alcohol absorption at all. Being aware of the huge impact food can have if chosen correctly, and eaten strategically, will be hugely impactful. The goal of the product is to provide drinkers a useful and convenient tool to moderate alcohol effects with the least calories possible,” he notes.

Proven by science
The core technology behind the SOBAR’s high efficiency is called Alco-HOLD, which is designed to hold alcohol in the stomach for a longer time where it can be inactivated.

The clinical trial compared the SOBAR’s ability to reduce alcohol absorption against two other foods in a group of 21 healthy adults – ten men and 11 women. Each person was tested four times, eating either no food, a 210 calorie SOBAR, 210 calories of a popular snack mix or a 635 calorie full meal right before consuming two drinks.

The average peak blood alcohol concentration measured over 90 minutes was reduced (compared to eating no food) by 50 percent with a SOBAR compared to only 25 percent by the snack mix. Although the reduction was even greater (68 percent) after eating the full meal, on a per calorie basis, the SOBAR outperformed both other foods by about two to one. 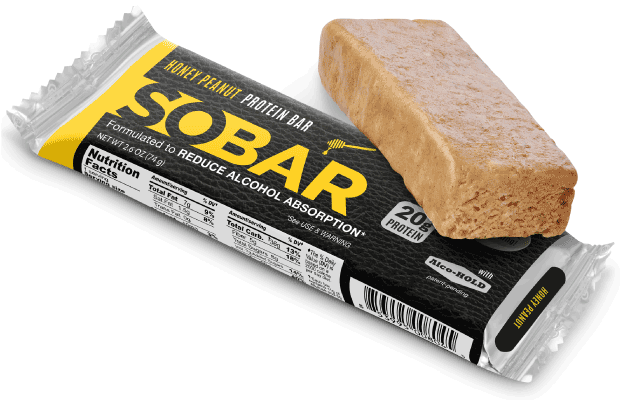 Despite the nutritional bar’s properties, however, the company advises that consumers should drink alcohol responsibly.  “It can be eaten at any time before or during drinking to have some effect on alcohol absorption and elimination. However, in our testing, the maximal effect occurs if eaten 5-15 minutes before starting to drink. This optimally slows the gastric emptying rate just before alcohol is introduced to the stomach. This protocol was used in the clinical trial and the average reduction of peak blood alcohol concentration, and total absorption, was 50 percent. For a 210 calorie snack, that is a remarkable result,” Dr. Fisher says.

“A nutritional powerhouse”
According to Dr. Fisher, SOBAR is a nutritional powerhouse. “It has a lower glycemic index because of a high allulose content. Moreover, it has 5 to 6 g of insoluble fiber, 20 g of mostly complete milk protein (some nut derived, 25 percent) and a healthy dose of the powerful prebiotic acacia gum,” he explains.

It also has notable prebiotic effects and could be produced as a powder or beverage, but Dr. Fisher touts the convenience element of the bar application.  “The idea is to have the food readily available, when and where you need it and ready to go.”

The product is suitable for any age as a normal snack or protein bar, beyond its alcohol absorption reducing properties.

In the same space, US-based beverage brand, The Plug, also launched a science-backed anti-hangover drink. It has an “all-natural” proprietary formula with zero added sugar and a good flavor profile, with 40 calories per serving.

In August, Biotics, a genetic engineering company, launched “the first genetically-engineered probiotic on the market,” crafted to lessen the “rough” feelings the day after drinking.

Successful functional foods must focus on a health benefit that appeals to the mass market while addressing issues that center on general well-being. This is according... Read More

Yemoja is aiming to commercialize the production of various microalgae candidates for managing inflammation and Inflammatory Bowel Disease (IBD). These will be... Read More

Consumers are taking a more proactive approach to their well-being with functional nutrition, close-to-nature ingredients and foods that signal self-care. These are... Read More

Probiotics and pro-inflammatory cytokines have proven the potential to help reduce inflammation and modulate an overactive immune system, according to A&B... Read More