You are in : All News > Harvard University’s vagina-on-a-chip ushers in new era for women’s health

09 Jan 2023 --- Harvard researchers have used organ-on-chip technology to replicate the vaginal microbiome in vitro. The landmark innovation will be used as a preclinical model to develop treatments for bacterial vaginosis (BV) – a condition arising from vaginal microbiome dysbiosis.

BV afflicts nearly 30% of reproductive-aged women worldwide, but research into restoring vaginal flora balance has been limited. A primary reason for this is due to lack of effective preclinical models.

“The Vagina Chip has the power to significantly accelerate the development of probiotics or other supplements as it recapitulates the human vagina and its microenvironment,” Aakanksha Gulati, postdoctoral researcher and co-author of the paper, tells NutritionInsight.

Made of real human vaginal epithelium and underlying connective tissue cells, the chip can be inoculated with different strains of bacteria to study their effects on vaginal health.

“The chip can host an entire ecosystem of microbes true to a real vagina under the precise physiological condition for the tissues and microbes,” underscores Abidemi Junaid, research scientist and co-author of the paper.

The Vagina Chip contains living human vaginal epithelial cells lining the upper channel and human stromal fibroblast cells lining the lower channel, separated by a permeable membrane to replicate the arrangement of cell layers in the human vagina (Credit: Wyss Institute at Harvard University).The latest organ on a chip
The Vagina Chip was developed at the Wyss Institute at Harvard University, where other organs-on-chips have been engineered.

These microdevices are composed of a clear, flexible polymer about the size of a USB memory stick that contains hollow microfluidic channels lined with living human organ cells and human blood vessel cells.

These living, three-dimensional cross-sections of human organs provide a window into their inner workings and the effects drugs can have on them without involving humans or animals.

The researchers who describe the Vagina Chip in the journal Microbiome hope that consumers may use products developed with the innovation in the next ten years. The chips will be available to supplement and pharma companies.

How it works
The research team seeded the top channel of the chip with human vaginal epithelial cells. They then added human uterine fibroblast cells to the opposite side of the permeable membrane separating the top and bottom channels. This arrangement replicated the structure of the human vaginal wall.

After five days, the Vagina Chip had developed multiple distinct layers of differentiated cells that matched those found in human vaginal tissue. When the scientists introduced the female sex hormone estradiol – a form of estrogen – into the chip, its gene expression patterns changed in response, indicating that it was sensitive to hormones – another critical feature for replicating human reproductive organs in vitro.

The Vagina Chips are cultured in an automated device called the Zoë. This device enables the precise microphysiological conditions needed to culture up to 12 chips.

The innovation can be visualized under a microscope. Samples are then collected from the chips for biochemical assays to evaluate the host-microbiome interactions. 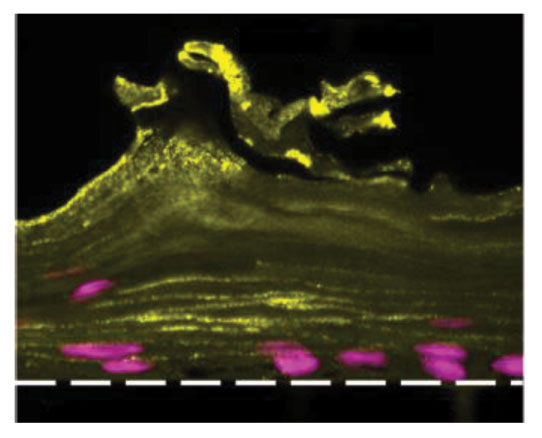 This immunofluorescence image shows that the vaginal epithelium inside the Vagina Chip developed distinct layers and tissue structures (yellow) that replicate those found in the human vagina within five days (Credit: Wyss Institute at Harvard University).Testing 1, 2, 3
Recent research has shown that healthy human vaginal microbiomes typically contain multiple strains of Lactobacillus bacteria. The team worked with Dr. Jacques Ravel and his team at the University of Maryland School of Medicine, who had created three different consortia each, containing several strains of L. crispatus.

When they introduced these consortia into the Vagina Chip, all three successfully colonized the chips after three days. The consortia also began producing lactic acid, which helps to maintain the vagina’s low pH and inhibits the growth of other microbes.

Beyond helping to maintain an acidic environment, the presence of the L. crispatus bacteria also affected the Vagina Chip’s innate immune responses.

Chips with bacterial consortia produced lower levels of several inflammation-causing cytokine molecules than chips without the bacteria. This is consistent with the current theory that these “good” microbes help keep inflammation in check in healthy human vaginas.

Correlating “bad” bacteria to inflammation
Having created a healthy Vagina Chip with optimal bacterial residents, the team then conducted a new experiment in which they inoculated chips with different species of bacteria associated with BV: Gardnerella vaginalis, Prevotella bivia and Atopobium vaginae.

A consortium of those three “bad” microbes caused the chips’ pH to increase, damaging the vaginal epithelial cells and significantly increasing the production of multiple proinflammatory cytokines - all responses that were similar to what has been observed in human patients with BV.

“It was very striking that the different microbial species produced such opposite effects on the human vaginal cells, and we were able to observe and measure those effects quite easily using our Vagina Chip,” says Junaid.

“The success of these studies demonstrate that this model can be used to test different combinations of microbes to help identify the best probiotic treatments for BV and other conditions.” 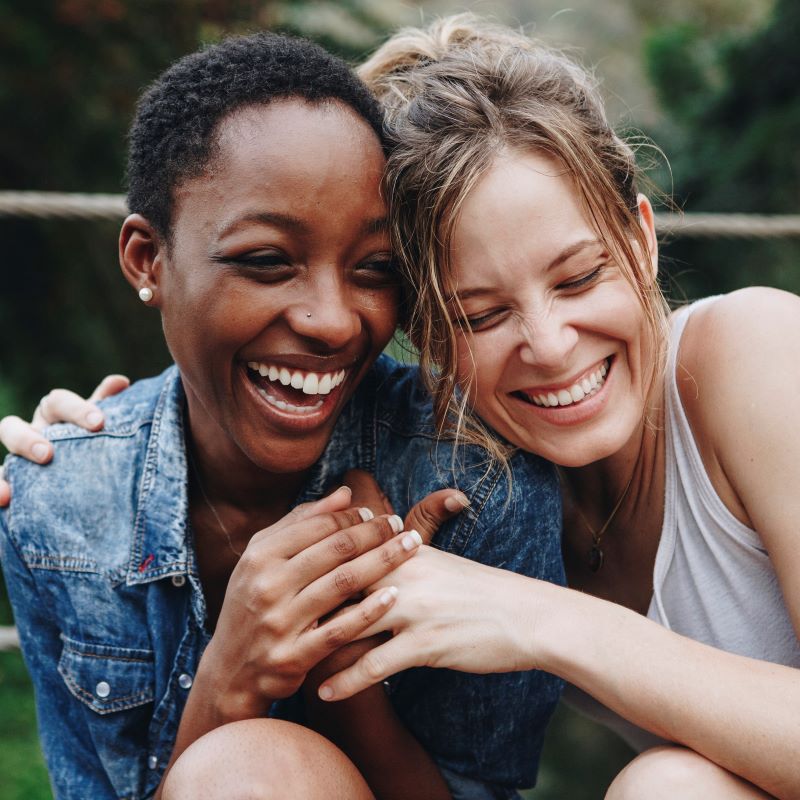 Bacterial vaginosis affects 30% of reproductive-aged women worldwide.The team is now using the chip to test new and existing treatments for BV to identify effective therapies that can advance into clinical trials. They are also working on integrating immune cells into the chip to study how the vaginal microbiome might drive systemic immune system responses.

Taking the big view
While the organ-on-a-chip approach could give interesting information on the impact of dietary probiotics on vaginal health, Maja Orešnik, science and research director at PharmaLinea, emphasizes that one of the most important aspects is left out – the transition of prebiotics from the gut to the vagina.

“At least in the initial stages of the product development, such questions can hardly be answered without considering the functioning of the whole human body.”

Another potential barrier is that using the chip requires a lab with experts trained in culturing organs-on-chips, adds Junaid.

Working toward a world in balance
The Vagina Chip was developed with funding from the Bill and Melinda Gates Foundation, which aimed to create a biotherapeutic treatment for BV and move it into human clinical trials to decrease infections of the reproductive tract, prenatal complications and infant death rates, particularly in low-resource nations.

BV doubles the risk of many sexually transmitted infections, including HIV and increases the risk of pre-term birth in pregnant women, which is the second-leading cause of death in newborns.

Lallemand Bio-Ingredients (LBI) is a business unit of Lallemand Inc., a privately-held Canadian company founded at the end of the 19th century, and specializing in research, development, production and marketing of yeasts and bacteria. Today, Lallemand is present through plants, distribution centers or representative offices in over 50 countries.

LBI develops, manufactures and markets high-value yeast products from Saccharomyces cerevisiae and Torula yeast, including whole cell nutritional yeast, yeast extracts and yeast derivatives. The LBI business unit was initially formed in 1987 and the first products consisted of those sold for baking, nutritional, food and animal health applications. The product line grew to include mineral and vitamin-rich yeasts and yeast fractions (extracts and cell wall products).

Yeast is a unicellular fungus that fits well with plant-based solutions, including vegan, vegetarian and flexitarian diets. The LBI portfolio offers a variety of yeast products from Saccharomyces cerevisiae and Torula, which can contribute flavour and texture to create delicious plant-based meals. Furthermore, vitamin and mineral yeasts and specific yeast fractions can be used to support daily recommended micronutrient requirements with food fortification.

Health: M-Gard® yeast beta-glucan has been proven to support the immune system. Lalmin® vitamin and mineral yeasts are inactivated whole cell yeast products containing elevated levels of specific micronutrients. Engevita® is a premium nutritional yeast which can contribute to your recipe or application in many ways for taste, texture and nutritional value. Yesto-Seal® are brewer’s yeast products which are specifically designed for tableting. All are suitable for plant-based applications

Industrial fermentation: Fermentation Nutrients Ingredients (FNI range) have been developed to boost the growth and yield in industrial fermentation. FNI products are mainly primary yeast peptone and autolysates which contain a high level of protein in the form of readily and easily assimilated amino acids and peptides.

Higher intake of fruits and vegetables and regular physical activity can play a vital role in protecting against human papillomavirus (HPV). HPV is a virus that can lead... Read More