You are in : All News > Food allergy prevalence: 1 in 10 US adults actually have one, but 1 in 5 believe they do

Food allergy prevalence: 1 in 10 US adults actually have one, but 1 in 5 believe they do

07 Jan 2019 --- At least one in ten US adults have food allergies, yet almost one in five believe that they actually have one, according to a cross-sectional study survey published in JAMA Network Open. The population-based survey study of 40,000 US adults sought to provide nationally representative estimates of the distribution, severity, and factors associated with adult food allergies. Based on the findings, the researchers highlight the importance of visiting a physician to determine a food allergy before eliminating foods from one’s diet, for example.

According to the study, roughly 11 percent were food allergic at the time of the survey, whereas nearly 19 percent of adults believed that they were allergic to a specific food. Nearly half of food-allergic adults had at least one adult-onset food allergy, and 38 percent reported at least one food allergy-related emergency department visit in their lifetime.

Adult-onset food allergies are an important emerging health problem. According to the Food Allergy Research and Education (FARE) statistics, more than 170 foods have been reported to cause allergic reactions. 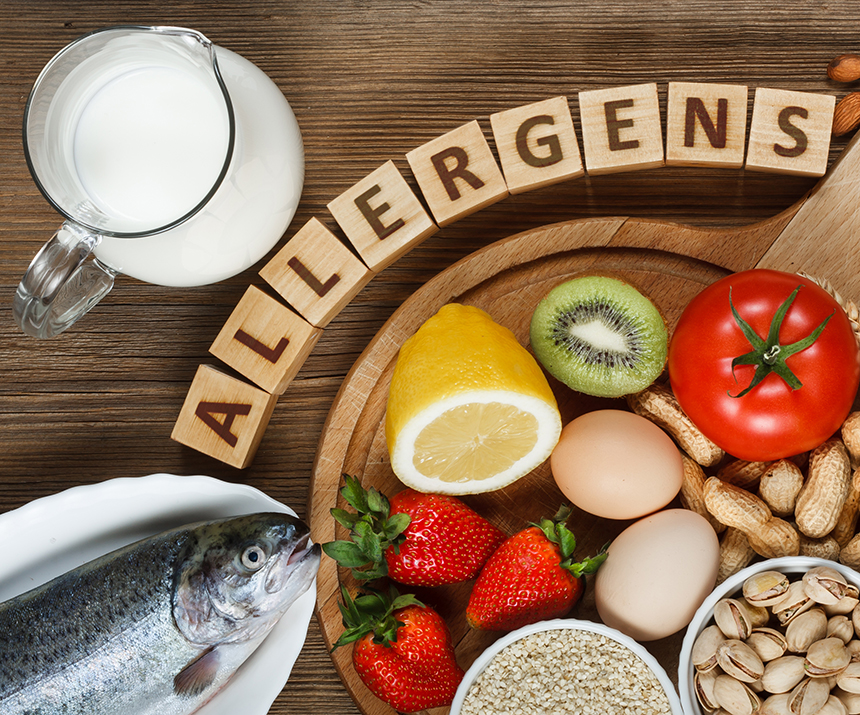 Click to EnlargeEight major food allergens include milk, egg, peanut, tree nuts, wheat, soy, fish and crustacean shellfish. These are responsible for most of the serious food allergy reactions in the US. An additional allergy to sesame is an emerging concern.

“Our data show that shellfish is the top food allergen in adults, that shellfish allergy commonly begins in adulthood, and that this allergy is remarkably common across the lifespan,” says lead author Ruchi Gupta, MD, MPH, from Lurie Children’s, who is also a Professor of Pediatrics at Northwestern University Feinberg School of Medicine.

“We need more studies to clarify why shellfish allergy appears to be so common and persistent among US adults,” adds Gupta.

The survey sought out to provide nationally representative estimates of the distribution, severity and factors associated with adult food allergies.

The study found that at least one in ten US adults are food allergic. However, the results also suggest that nearly one in five adults believe themselves to be food allergic, whereas only one in 20 is estimated to have a physician-diagnosed food allergy.

Click to EnlargeGupta says it is important to see a physician for appropriate testing and diagnosis before completely eliminating foods from the diet.

Considering the economic and quality of life implications associated with allergen avoidance and other food allergy management behaviors, individuals with a suspected food allergy should receive appropriate confirmatory testing and counseling to counter unnecessary avoidance of allergenic food, say the researchers.

Greater patient education efforts regarding key differences between food intolerances and allergies also may be warranted. Furthermore, the results of the study suggest that adults need to be encouraged to see their physicians to receive a proper diagnosis, epinephrine prescription, and counseling for their food allergy.

The food allergen issue continues to inspire creative product development. For example, in November 2018, a collaboration agreement between Mount Sinai Health Systems and AllerGenis LLC was launched, seeking to develop and commercialize improved food allergy detection and patient management technology, that provides both clinicians and patients with better insight and information. The first product of the collaboration will be a peanut allergy assay, available in the fall of 2019, followed by a series of assays for other common food allergies like milk, nuts, egg and shellfish.

26 Feb 2020 --- Else Nutrition is set to launch an organic, plant-based toddler formula made from almonds, buckwheat and tapioca in the US this spring. This marks the first... Read More

24 Feb 2020 --- Functional beverages are rising in popularity as consumers seek added nutritional benefits and health-boosting properties from the products they consume, often in... Read More