You are in : All News > FAO partnership promotes pulse production and consumption to tackle global malnutrition 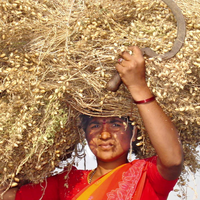 11 Dec 2019 --- The cultivation of pulses could address a range of malnutrition needs around the globe. This is according to the Food and Agriculture Organization of the United Nations (FAO), which is embarking on a three-year partnership with the Global Pulse Confederation (GPC) to promote the cultivation of crops including lentils, dry beans, dry peas and chickpeas. This is in light of the gap between potential and actual yields continuing to affect many smallholder farms. The new partnership aims to move from advocacy to on-the-ground actions, including spurring investment opportunities and mapping out ways to leverage value chains for products.

“Pulses are increasingly seen as a key part of healthy diets and consumers are looking for healthier alternatives to foods of animal origin. Pulses are useful especially in addressing protein-energy malnutrition. They can also help with obesity, diabetes and coronary heart diseases,” Boubaker Ben-Belhassen, Director, Trade and Markets Division at FAO, tells NutritionInsight.

The health benefits of a pulse-rich diet has fueled the demand for alternative sources of proteins and pulses seem to be the most common alternative, he continues. For example, pulses are a key component in recently popularized foods, such as meatless burgers.

Pulses are a subgroup of legume crops harvested for dried grains. These include lentils, chickpeas, dry beans, pigeon peas and other species. Low in fat and sodium, pulses are naturally free from both cholesterol and gluten, while delivering high amounts of fiber, folate, potassium and plant-based protein and iron. Pulses also provide a strong basis for healthy, daily nutrition and can be used in a wide variety of derivative products, such as pasta, noodles and enriched flour, Ben-Belhassen notes.

“Given the multiple benefits of pulses, their consumption should be promoted. Encouraging pulse consumption requires a multifaceted approach that should be adapted to different socio-economic realities. Making pulses more accessible and attractive, responding to the expectations of consumers and tackling new trends are important elements of the approach,” he states.

Trends in consumption of pulses across different regions, 1985 to 2010.Pulses have also been spotlighted for their sustainable profile. In October, a study tied the health impacts of foods to their overall environmental impact, such as greenhouse gas emissions (GHG) and water usage. The results show that healthier diets, consisting of pulses and vegetables, for example, would markedly reduce the environmental impact of agriculture and food production.

Malnutrition and food insecurity
As malnutrition stems from unbalanced or unhealthy diets, it is one of the major contributors to obesity, diabetes and coronary heart diseases and can even lead to death. Rates of malnutrition are concerning in many parts of the globe, as a recent study found that Sub-Saharan African families are at greater risk of food security than previously estimated.

Pulses are consumed in much higher levels in Latin America, South Asia and sub-Saharan Africa, given their cheaper availability compared with animal-based foods, says Ben-Belhassan. However, this is offset by much lower levels in the rest of Asia, Europe and Oceania, according to The Global Economy of Pulses, a report published by FAO earlier this year.

Due to a shift toward foods of animal origin as a source of protein in the diet, this price advantage has been diminishing over the years. Other contributing factors to the high intake include household economies, regional cultures, dietary preferences and levels of awareness.

The FAO’s partnership with GPC aims to bring this dietary importance back to the fore by boosting the visibility of World Pulses Day – February 10 – around the world, with the GPC using its networks to encourage greater private-sector participation. This follows momentum gained from 2016’s UN International Year of Pulse, which helped legumes and pulses gain momentum.

The availability of non-regional products has led people to abandon their traditional diets and rising incomes have led people to shift to animal-based food. This leaves global consumption of pulses stagnant at around 7 kg per person annually, Ben-Belhassen says. Pulse crops suffer from a lack of interest by governments and policymakers. Source: FAO/Christena Dowsett.

On the production front, pulse cultivation on smallholder farms is characterized by low yields and high risk, he continues. Given the low and uncertain returns from pulses, most smallholder production takes place on marginal soils, on land without irrigation facilities and with limited access to technological improvements. The FAO-GPC partnership is set to identify at least three investment opportunities involving at least 1,000 smallholders each and pitching the plan to potential investors.

Pulse crops suffer from a lack of interest by governments and policymakers, as pulse cultivation is not viewed as an activity capable of generating economic returns, Ben-Belhassen says. “This has translated to a low level of R&D investment for these crops. A review of the state of pulse research showed that out of an estimated total budget of US$61 billion of public and private food and agricultural research annually, only some US$175 million (less than 0.3 percent) were directed towards pulse crops.”

Moreover, in developing countries, the main priority of governments has been to increase cereal production, especially wheat and rice, for food security purposes, he says. This has constituted a “policy bias” against smaller crops. Addressing these concerns, FAO will conduct value-chain analyses in selected countries, while the GPC will analyze the discovered opportunities and propose business plans to investors and donors.