You are in : All News > CSPI Threatens Welch's With Lawsuit Over “Deceptive” Health Claims 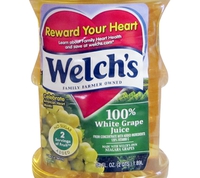 15 Aug 2012 --- CSPI: "Welch's cites only studies that were uncontrolled, conducted on animals, or that actually showed that grape juice was ineffective at providing the cardiovascular benefits associated with polyphenols."

15 Aug 2012 --- Welch's shouldn't be slapping a heart-health icon on its grape juice and other products, according to the lobby group Center for Science in the Public Interest. In fact, says the group, not only does Welch's juice not improve heart health, it may, on balance, do harm by contributing to insulin resistance and obesity. CSPI notified Welch Foods, Inc., that it will face a lawsuit unless it stops making heart-health claims on its juices, spreads, fruit juice cocktails, and fruit snacks.

Welch's relies on the presence of polyphenols and vitamin C in grape juice to justify its statement, often placed inside a red heart shape, that the juice "helps support a Healthy Heart." Welch's cites only studies that were uncontrolled, conducted on animals, or that actually showed that grape juice was ineffective at providing the cardiovascular benefits associated with polyphenols. And the National Institutes of Health's Office of Dietary Supplements found that studies of vitamin C gave no indication of cardiovascular benefits. Making matters worse, says CSPI, is that Welch's encourages consumers to drink juice in lieu of eating fresh fruit, stating that "Getting enough fruits and vegetables each day is important for overall health—but everyday life often gets in the way … Welch's 100% Grape Juice makes it easy to squeeze in more purple fruit each day as part of a healthy diet for the whole family."

The effects of too much sugar and too many calories negate any possible health benefits from Welch's products, the group wrote in a letter to Welch Foods Inc. president and CEO Bradley Irwin. An 8-ounce serving of Welch's grape juice contains 36 grams of sugar and 140 calories, about one-third more than the same amount of Coca-Cola.

"Most Americans concerned about their weight and risk of diabetes would actually do well to drink less juice," said CSPI executive director Michael F. Jacobson. "It's deceptive and misleading for Welch's to claim that grape juice has any special benefit to heart health."

Welch's similarly uses a giant heart-shaped logo on its Fruit Juice Cocktails, which are only 25 percent juice, as well as on various jams, spreads, and fruit snacks that are little better than candy, according to CSPI.

Labels for Welch's Berries 'n Cherries Fruit Snacks state "Reward Your Heart" and invite consumers to "Learn about Family Heart Health at welchs.com," and to "Celebrate American Heart Month!" The labels show pictures of wholesome strawberries, blueberries, raspberries, and cherries, and bear an icon stating "Made With REAL Fruit," yet the snacks are mostly made with apple and pear juice concentrates, which are similar to empty-calorie sugar syrup, and corn syrup, sugar, and modified cornstarch. "On the ingredients list, fruit purees come after all of these unhealthful and non-nutritious ingredients," CSPI's letter states. The products also have no fiber, which is present in real fruit, and artificial food dyes, which are not.

CSPI's letter invites Welch's to resolve the issues it raises without litigation but says that if Welch's does not respond, CSPI will pursue litigation. CSPI's in-house litigation unit is currently pursuing cases to improve the labeling or marketing of products made by General Mills (fruit snacks, Nature Valley granola bars), Coca-Cola (Vitaminwater), and others. It has negotiated improvements in Kellogg’s food marketing to children, the labeling of Aunt Jemima blueberry waffles, and the labeling and advertising of Airborne dietary supplements.

07 Jul 2021 --- BrewDog has pulled an Instagram post for its alcoholic hard seltzer drink following intervention from the UK’s Advertising Standards Agency (ASA) which has... Read More

20 May 2021 --- Chicory root fibers inulin and oligofructose have been approved for a prebiotic claim for the first time in Indonesia by the country’s National Agency of Drug... Read More