You are in : All News > Crickets to muscle out whey? Protein Rebel sheds light on insect bioavailability in sports nutrition 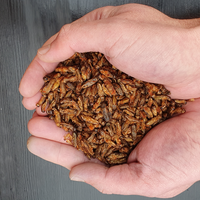 12 Oct 2021 --- Cricket protein may present a more sustainable alternative to whey protein for sports nutrition applications like muscle growth, according to a Protein Rebel study. It suggests cricket protein could be 50% more digestible than whey protein.

“There are so many nutritional and environmental benefits to eating insects.” Tim Boote, co-founder of Protein Rebel, tells NutritionInsight.

“The results of this gut research are really exciting and will make the sports nutrition industry sit up and take notice,” he notes.

Protein Rebel is a UK-based company making protein powders like Reload, which is made from plant and cricket protein.

Sustainability as the ‘whey’ forward
The study purports it is the first of its kind to try and compare cricket protein against the giant of the market: whey protein. On how this may pave the way forward, Boote notes change takes time, but the research suggests that cricket protein could have faster and higher rates of protein digestion.

“As whey protein makes up 80% of the protein powder market and has been regarded as the most effective protein for promoting muscle protein synthesis for years, change takes time,” Boote says.

“Crickets have a strong nutritional profile. They contain all essential amino acids as well as various vitamins and minerals, and we recognized early on that they’re incredibly easy to digest.”

According to Boote, the benefits of cricket protein also lie in their sustainability credentials. Farming crickets requires far less land, water and feed than cows, emitting a fraction of the carbon. 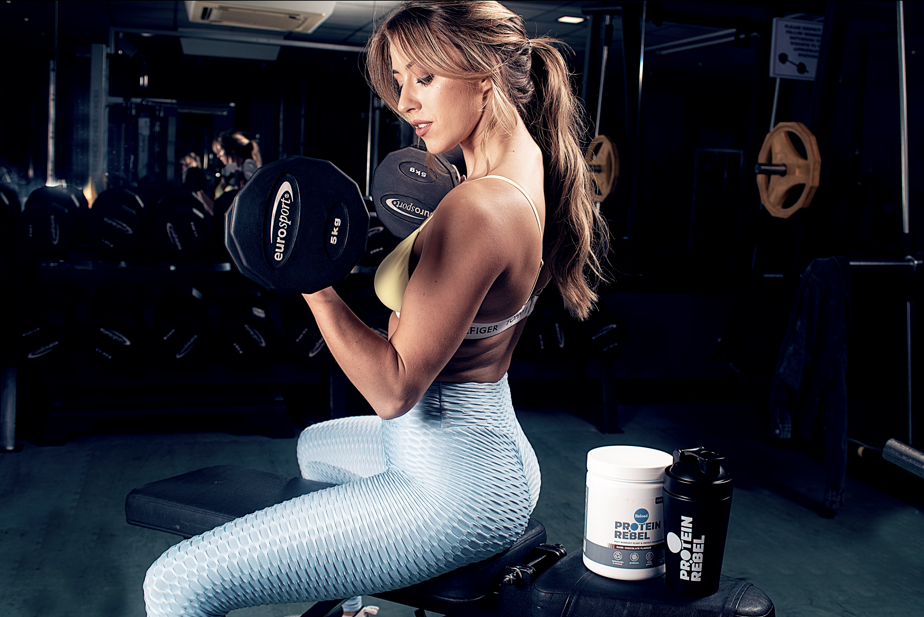 Reload is made from pea protein and cricket protein powder.

Overcoming the “ick” factor of crickets
Where consuming insects are concerned, there is still an “ick” factor but how the items are presented to consumers can make a difference, Boote notes. The Reload product, for instance, is in powder form, which makes it more palatable for users.

“Some people may never overcome the ‘ick’ factor; however, there are also many people who aren’t deterred by eating insects. As people increasingly learn about their nutritional and environmental benefits, they open up to the possibility of including them in their diet,” he notes.

“Interestingly, we’ve found that far fewer people than we’d anticipated are put off by the thought of consuming insects. So long as people understand the rationale behind eating them, they’re often willing to give them a try.”

Sports nutrition could bring insects to the West
Boote outlines that one of the benefits of this kind of study is that it can help drive change from both sports nutrition providers and consumers. “The insect protein market is still in its infancy in the West despite billions of people eating insects worldwide.”

As the suggested benefits of using cricket protein are coming to the fore with more research, fitness and sports enthusiasts may embrace the ingredient for the benefits they seek, such as improved muscle growth.

“Users of sports nutrition are perhaps more open to using less common ingredients in their products so long as they provide functional benefits. After all, sports and fitness enthusiasts are often risk-takers who are open to trying new things,” Boote says.

Potential for muscle growth promotion
The study was conducted by Aelius Biotech in partnership with Protein Rebel and was carried out using a model human digestive tract. It utilized a patented model of the human mouth, stomach and small intestine, which simulates the digestive process.

For proteins to be absorbed and used for muscle protein synthesis (MPS) and muscle growth, they first must be broken up into their building blocks. To trigger MPS, a protein requires a complete amino acid profile which cricket protein has, Protein Rebel says.

Furthermore, the speed at which the protein is digested in the small intestine – the primary site where amino acids are absorbed – is important. Higher quality proteins have a faster absorption rate, therefore promoting MPS sooner.

“As cricket protein has a complete amino acid profile and is 50% more digestible than whey, the indications are that it has the potential to promote muscle growth to at least the same level, if not at a better level, than whey protein,” Peter Chater, co-founder and CEO of Aelius Biotech says. 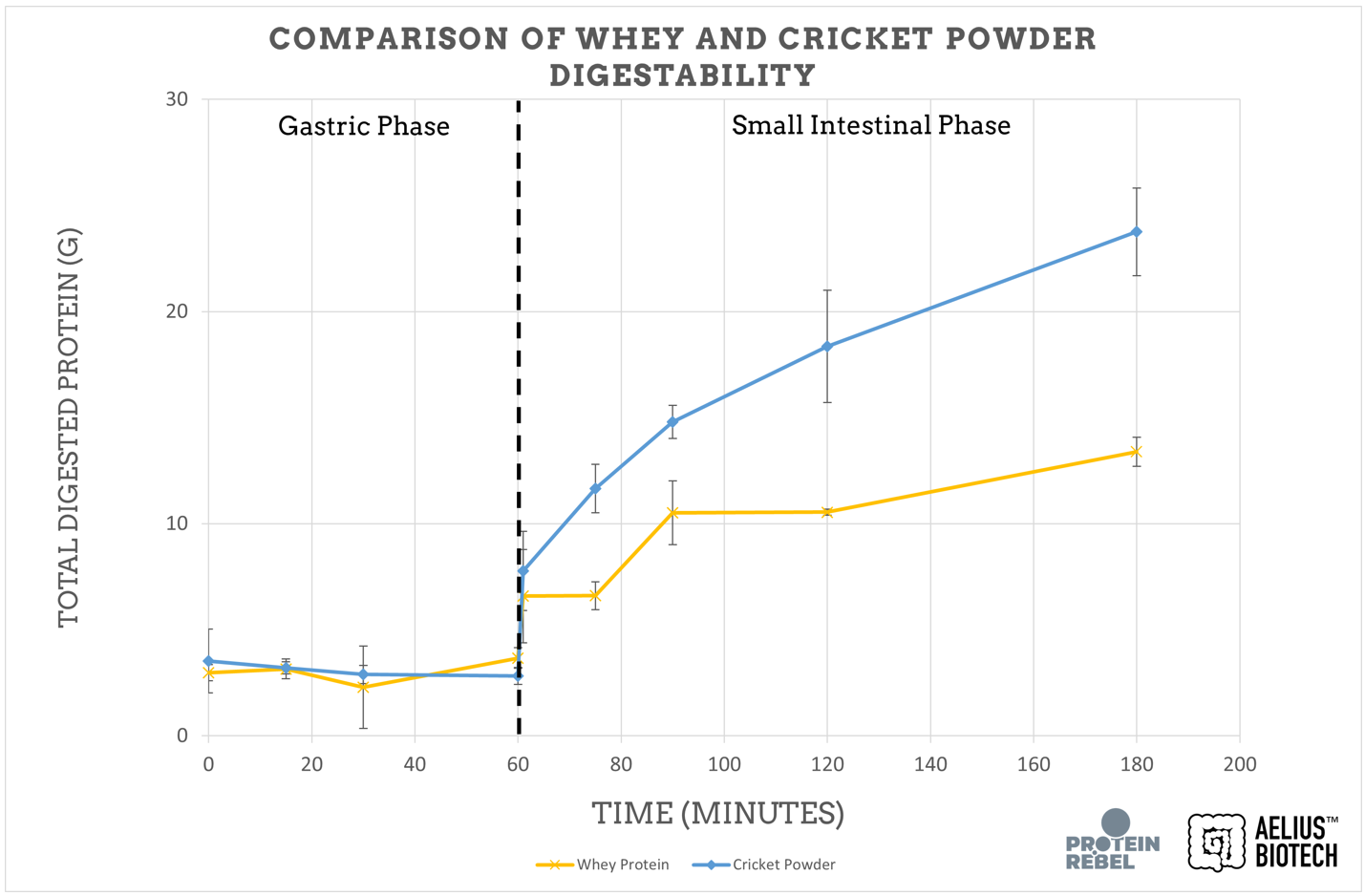 The findings suggest that cricket protein could be 50% more digestible than whey protein.

Industry investing in insects
As an indication of the industry’s growing turn toward insects, the European insect production project ValuSect invested €410,000 across 17 North-West European enterprises to help them develop insect-based food businesses.

The European Food Safety Authority (EFSA) opined earlier this year that the consumption of house crickets is not nutritionally disadvantageous, with proposed food formats including snacks and food ingredients.

The EFSA also deemed migratory locusts (Locusta migratoria) to be safe for human consumption in both frozen and dried formats, by the EFSA earlier this year.

Some research has shown that the consumption of crickets can aid the growth of beneficial gut bacteria and help reduce inflammation in the body, remaining safe at high doses.

Beyond the healthy advantages, the environmentally friendly element of insects as a protein source compared to traditional livestock has long been flagged. Findings from research carried out in Finland suggest that it is more sustainable to use insect protein for food than using it to replace soybean meal in animal feed.

The same study notes that insect protein – such as crickets, flies, and worms – has the greatest potential to reduce the food-related carbon footprints of European consumers if edible insects are consumed directly or processed as food.

As research on insects grows, mealworms have been proposed to be as nutritionally beneficial as the “gold standard” dairy protein.

Fears over rampant and unregulated use of IV nutrition in sports, despite little evidence over effectiveness

Despite the absence of scientific proof that intravenous (IV) feeding is safe or effective, the use of “drip bars” is threatening to become the standard of... Read More