You are in : All News > Conservatives’ landslide success: What it means for UK nutrition

Conservatives’ landslide success: What it means for UK nutrition

13 Dec 2019 --- Boris Johnson will remain the UK’s prime minister following the Conservative party’s most successful election results in decades. However, a realization of the party’s “get Brexit done” slogan will have a major impact on the nutrition sector, as told to NutritionInsight by a variety of movers in this space. UK supplement manufacturers could face difficulties in importing and exporting ingredients, leading consumers to struggle accessing key nutrients. Other key concerns flagged include a possible oversight on domestic issues regarding obesity, as well as malnutrition and hunger.

“The Conservatives have promised to deliver Brexit and appear likely to take the UK out of the EU early next year, with negotiations on a trade deal to follow. We believe it is vitally important that however Brexit is delivered, we avoid any impact on the provision of specialist nutrition products, many of which are manufactured in the EU. Hundreds of thousands of people are reliant on these products, sometimes as their sole source of nutrition,” says Andy Burman, Chief Executive at the British Dietetic Association (BDA).

Previous promises under Theresa May’s government stated that there will be no lowering of food standards in the UK following Brexit. However, these references to a “common rulebook” with the EU disappeared under the Johnson administration, flags Sam Jennings, Technical Adviser at the Council for Responsible Nutrition (CRN) UK.

Click to EnlargeThe Conservatives have promised to deliver Brexit and appear likely to take the UK out of the EU early next year.“Therefore, there is a possibility that divergence will be seen in food laws, including food supplements. The hope of the industry is that such divergence will not include a lowering of quality standards, as the current EU standards for food supplements are greatly respected in many areas of the world and are important for future global trade of UK products,” he continues.

Notably, as the UK will no longer have a voice at the EU Commission working group tables, there will be little to stop laws that are not in the UK’s best interests from being adopted in the UK during an implementation period. Jennings predicts that this could include laws on food additives and permitted substances, both of which could greatly impact products currently available in the UK. Import and export issues are another area of concern, especially in relation to products of animal origin used in food supplements and functional foods.

Burman of BDA also notes that it will be crucial that the Conservative party’s proposed points-based immigration system does not alienate the numerous dietitians and other healthcare professionals from outside the UK that work within the NHS and other health and care services.

Addressing obesity
National policy also plays a key role in shaping diets through investment in healthcare and education as well as through regulations such as the Soft Drink Industry Levy (SDIL). However, Ben Reynolds, Deputy Chief Executive of Sustain, says that the Conservative manifesto slim was when it came to commitments to improve dietary health.

“The much-lauded success of SDIL was expected to lead to an extension to other products, at the very least to milky drinks. However, the Prime Minister’s branding of this as a so-called ‘sin tax,’ suggests any extension may be a long time coming,” he adds.

Reynolds continues that the Child Obesity Plan has come to a standstill in the past year, with no announcements on the result of a series of consultations on progressive policies that were meant to be cornerstones of May’s government’s aims to halve child obesity by 2030. Earlier this year, the outgoing Chief Medical Adviser to the UK government called on lawmakers to take “bold action” to slash children’s obesity rates, which has “cruel and avoidable” health impacts.

Lacking nutrients
In parallel to ballooning obesity rates, there is also a downward decline in certain micronutrients’ intake across all age groups of the population according to the UK’s National Diet and Nutrition Survey. “Many consumers are eating high-energy, low-nutrient diets and their micronutrient needs are not being met by the food they are consuming. A low micronutrient status can ultimately can lead to an increased risk of ill-health,” explains Jennings.

He notes that CRN UK has worked with Food Supplements Europe on publications that demonstrate how increased food supplement use can financially benefit a country, in terms of helping maintain health for longer and thus reducing the drain on government health resources. “There are numerous areas where public health could be supported by a change in government attitude to food supplements,” Jennings adds. 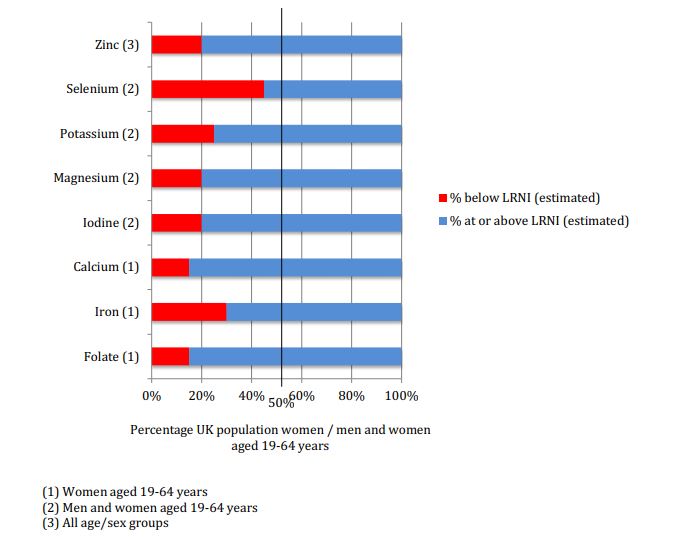 Click to EnlargeCRN UK highlights that many people are not receiving enough micronutrients.

Additionally, food insecurity in general has grown over the past decade, according to Burman of BDA. Malnutrition, particularly amongst the elderly, continues to be an often hidden crisis that is impacting health and wellbeing and costing the NHS billions of pounds.

“It’s in our power as a country to end the need for food banks. But if we’re to get there, we need our new government to act. We’re ready to share evidence from our network of food banks across the UK, and we’d encourage any new MPs to speak to their local food bank about why people are being referred for emergency food. It’s not right that anyone should have to turn to charity for the basics – this can change,” concludes Emma Revie, Chief Executive of the Trussell Trust.

24 Jan 2020 --- As Sugar Awareness Week draws to a close in the UK, a survey from Action on Sugar (AoS) has revealed that ready-to-drink (RTD) pre-mixed spirits are... Read More

20 Jan 2020 --- In a highly controversial move, the US Department of Agriculture (USDA) has announced two proposals that would relax school food nutrition standards set out in the... Read More