You are in : All News > Chinese Breast Milk Study Gives Opportunities for Formula 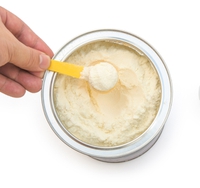 11 May 2015 --- A study initiated by Chr. Hansen has shown that bifidobacteria and lactobacilli are present in breast milk from Chinese mothers, strengthening the case for adding clinically documented probiotics to infant formula, in order to improve nutrition.

In the last decade, research has shown that breast milk from Western women contains bacteria, such as bifidobacteria and lactobacilli. Bifidobacteria are known to play an important role in the development of a healthy microbiota in infants and children, which is beneficial to the digestive and immune functions. A new study now confirms a presence of the same bacteria in breast milk from Chinese mothers.

The study was initiated by Chr. Hansen and conducted in collaboration with Shanghai Institute of Pediatric Research. The main author, Dr. Linxi Qian, presented the results last week at the European Society for Pediatric Gastroenterology, Hepatology and Nutrition 2015, in Amsterdam.

Chr. Hansen continuously invests in clinical studies within the infant segment, and previous studies have shown that the probiotic Bifidobacterium strain named BB-12 may be effective in preventing gastrointestinal and respiratory infections in infants and children. The product portfolio also includes Lactobacillus, LGG which is the world’s best documented lactobacillus.

Mikkel Jungersen, Scientific Advisor, Human Health & Nutrition, Chr. Hansen, says: “The confirmed presence of bifidobacteria and lactobacilli in Chinese breast milk is essential knowledge for all those who are active in the infant formula business in China. It makes sense for a mother who is feeding her baby with infant formula to prefer a product resembling real breast milk the most, and this study shows that bifidobacteria and/or lactobacilli are essential additives to nutritious infant formula.”

15 Jan 2021 --- UK researchers have identified the biological mechanism behind the long-term positive health effects of breastfeeding in preventing disorders of the immune system... Read More

13 Jan 2021 --- A team of researchers at the National University of Singapore (NUS) have created plant-based tea and coffee products filled with live probiotics. The move... Read More

11 Jan 2021 --- With consumer interest in probiotics and prebiotics rapidly increasing, freeze-drying is a technique renowned for its ability to preserve the quality and shelf life... Read More