You are in : All News > Cheaper ergothioneine production could unlock dementia-fighting potential

12 Nov 2019 --- A new production method of producing ergothioneine could provide a way of supplying the natural amino acid at a much lower price. Because of current expensive chemical production routes, market prices of ergothioneine are very high compared to other nutrients such as vitamins C and D. The scientists are now trying to increase productivity by engineering the strain further to make a commercially viable product. If successful, they will be able to bring an affordable product that could help fight brain diseases and other illnesses by preventing cellular stress to a broader market.

“Since we have shown that it is possible to produce ergothioneine in yeast at reasonable levels, it paves the way for a sustainable production method that can be better than chemical synthesis of ergothioneine. This would make ergothioneine available as a dietary supplement at a price that consumers can pay,” Steven van der Hoek, first author of the study, tells NutritionInsight.

By engineering and optimizing baker’s yeast, scientists from The Novo Nordisk Foundation Center for Biosustainability (DTU Biosustain) have, for the first time, exploited the potential of making ergothioneine in yeast in a bio-based fashion. As published in Frontiers in Bioengineering and Biotechnology Journal, the researchers successfully produced 0.6 g of ergothioneine per liter of yeast broth in a small-scale fermentation process.

Previously, low yields of ergothioneine were produced through complicated and expensive chemical synthesis.

Before the scientists were able to produce ergothioneine in a biobased fashion, some explored the possibility of simply extracting ergothioneine from mushrooms. But again, this would be extremely expensive and require mushroom farms taking up areas of potential farming land.

The researchers were inspired by scientific literature detailing animal models and population studies, which suggest that ergothioneine has an effect on neurodegenerative diseases such as dementia, Alzheimer’s and Parkinson’s, among other benefits. “Thus, we found it interesting to find out whether it was possible to produce this interesting compound in yeast instead of doing chemical synthesis,” explains Van der Hoek.

In nature, ergothioneine is produced by bacteria and fungi, but the enzymes bacteria and fungi use for making ergothioneine make up slightly different pathways. For this study, scientists screened enzymes from different fungi and from the bacterium Mycobacterium smegmatis in various combinations to identify the clones with the highest ergothioneine production. They used yeast as a production yeast and discovered that two specific enzymes, NcEgt1 and CpEgt2 – both fungal enzymes – made the best combination. 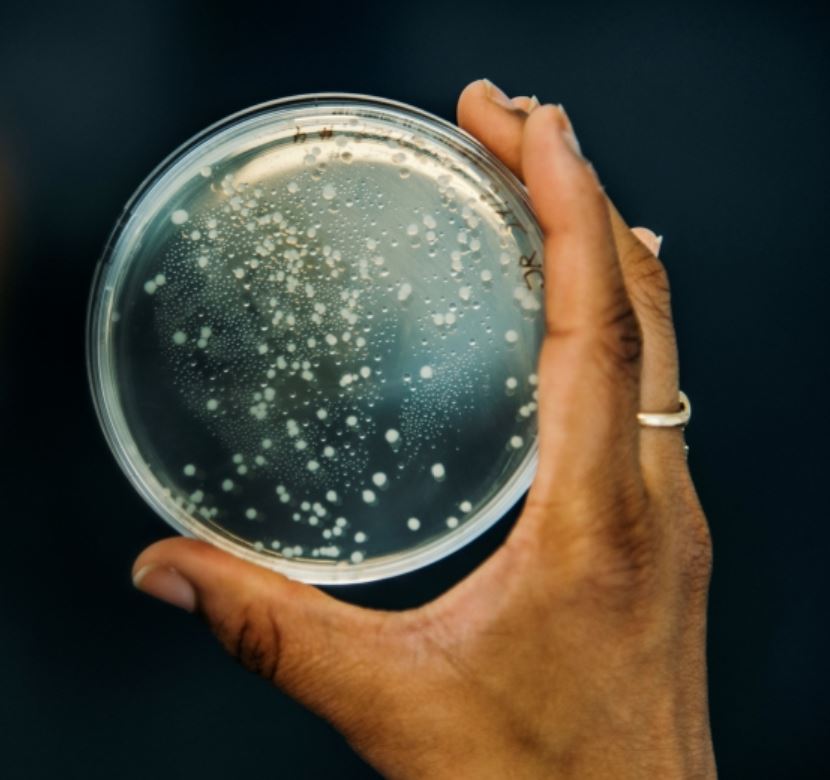 In nature, ergothioneine is produced by bacteria and fungi. (Source: Christian Als/ The Novo Nordisk Foundation Center for Biosustainability)While potential ergothioneine transporters to increase the yield had little effect, adding amino acids increased the production significantly. This is because they operate as building blocks of ergothioneine to the medium. Therefore, optimization of the medium was one of the important steps to increase the production to 0.6 g/L in 84 hours, which compares well with the current best-reported production in E. coli that gets 1.3 g/L in 216 hours.

A promising drug
Because ergothioneine is naturally found in fungi and bacteria, most people need to eat mushrooms to obtain it. Scientific studies have associated the incidence of mild cognitive impairment, a precursor for neurodegenerative diseases, with weekly mushroom intake. This shows that eating more mushrooms is associated with a lower risk of developing these diseases, according to Van der Hoek.

By preventing cellular stress, ergothioneine may help avoid brain diseases, neurological damage and cancer. In rats and roundworms, research shows that ergothioneine has promising effects in preventing neurodegenerative diseases such as dementia and Alzheimer’s. Also, it has been reported that patients suffering from neurodegenerative diseases have significantly lower blood levels of ergothioneine than others. This suggests that the amino acid holds the potential to act as a vitamin to prevent or delay the onset of these diseases.

However, the researchers emphasize that the positive effects of ergothioneine have so far only been reported in animal models, and, hence, it is too soon to say if this will work in humans. Regardless, ergothioneine production on a larger scale than today could be important to get access to a beneficial dietary supplement.

Earlier this year, a study found that a weekly serving of more than three-quarters of a cup of cooked mushrooms – the equivalent of 300 g – may help facilitate the alleviation of mild cognitive impairment in seniors by up to 50 percent. This was thought to be in part due to L-ergothioneine, which holds anti-inflammatory properties.

In March, Tetrahedron, which specializes in developing ingredients for the nutraceutical, pharmaceutical and personal care industries, received Novel Food status from the European Commission for its Ergoneine brand, which is a pure, synthetic source of the micronutrient L-ergothioneine.

Ahead of Gnosis by Lesaffre’s webinar on October 11 (15:00 CEST), which will focus on Quatrefolic as a supplement and the importance of innovating in the field.... Read More