You are in : All News > Blueberry polyphenol holds potential in fighting chronic inflammatory diseases

Pterostilbene has been flagged for its similarities to resveratrol 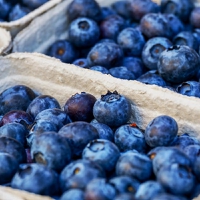 24 Sep 2020 --- Pterostilbene, a polyphenolic compound found in blueberries, holds potential as a therapeutic option for chronic inflammatory diseases, including inflammatory bowel disease (IBD). A team of researchers at Tokyo University of Science note that as the compound is easily absorbed by the body, it would be a strong drug candidate.

According to the researchers, the findings have ushered in new possibilities for the treatment of not just IBD but also other inflammatory disorders.

Dr. Takuya Yashiro, study co-author, states that for disease prevention, it is important to identify the beneficial components in foods.

“We must also understand the underlying mechanism by which immune responses and homeostasis are modulated in the body. Our findings showed that pterostilbene possesses a strong immunosuppressive property, paving the way for a new, natural treatment for IBD.”

Parallels with resveratrol
The team had long been interested in identifying novel actives in functional foods and understanding their effects on the body. One of these compounds was resveratrol, which is very similar to pterostilbene.

“Resveratrol was known to have pronounced immunomodulatory and anti-inflammatory effects on animal models of colitis ulcer. Therefore, we investigated the possibility of other compounds structurally similar to resveratrol as a new type of treatment for IBD,” says Dr. Yashiro.

Overcoming chronic inflammation
The gastrointestinal tract linings of patients with IBD contain long-lasting ulcers caused by chronic inflammation due to an elevated immune response in the body. This involves the excessive production of cytokines, immune system-related molecules.

Dendritic cells (DCs) and T cells are also involved. At the onset of an immune response, DCs produce inflammatory cytokines and activate T cells to initiate a defense response.

These processes together form a complex pathway that results in a “hyper” immune response. Thus, it was crucial to test it on this population of immune cells to find an effective compound that can suppress the immune system.Pterostilbene treatment can inhibit inflammatory cytokine production, providing hope for chronic inflammatory diseases.

Inhibiting inflammatory cytokine production
The researchers first studied the effects of a range of plant-derived compounds on DC-mediated T cell proliferation. This initial research led them to pterostilbene, which showed stronger immunosuppressive activity than the other candidates.

After further investigation, they found that pterostilbene treatment prevents T cells from differentiating into Th1 and Th17, which are subtypes of T cells that elevate the immune response. This was while increasing their differentiation into regulatory T cells, another subtype known to inhibit inflammation.

Notably, it was shown that pterostilbene treatment inhibits inflammatory cytokine production from DCs by attenuating the DNA-binding activity of a crucial transcription factor.

Pterostilbene was then tested in mice with IBD. It was found that oral intake of the compound improved symptoms of IBD.

Industry moves
Earlier this year, a Sabinsa investigation revealed that its pTeroWhite natural pterostilbene cream can support skin health and act as a natural SPF ingredient. In 2018, the company had also found that pterostilbene can help control weight loss and blood glucose levels.

At the time, the researchers also noted that pterostilbene “excelled” over resveratrol in almost all major parameters, which they attributed to “its superior bioavailability and activity.”

However, resveratrol has been flourishing in recent months, with Evolva launching Veri-te Aqua, a soluble resveratrol product. In February, the company pegged resveratrol synergies with ingredients like calcium and vitamin D as “the next big-thing.”

This week in nutrition news, chain restaurants in New York City, US, will now have to put warnings on prepackaged F&B high in sugar. The cell-based biotech company... Read More

A mouse study conducted by researchers at the Indian Institute of Technology (IIT) has found that Akay’s CurQfen, a curcumin-fenugreek supplement, shows potential... Read More

From environmental burden to goldmine: Grape pomace could be harnessed for stilbenes

Grape pomace, a by-product of wine-making could benefit the stomach’s biome, intestines and even cardiovascular health, according to a US study carried out by... Read More