You are in : All News > Arla Food Ingredients underscores milk protein hydrolysate potential for infant allergies 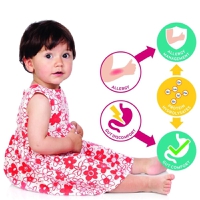 17 Dec 2019 --- Milk protein hydrolysates can provide a key way to manage allergies and discomfort when breastfeeding is not possible. This is according to Arla Food Ingredients (AFI), who highlight clinical studies that have observed a reduced risk of atopic dermatitis in infants fed hydrolyzed infant formulas compared with those based on intact proteins. However, rock-solid backing is becoming more important as regulation cracks down.

“Milk protein hydrolysates have been on the market since 1942 and launches of infant formulas containing hydrolyzed proteins are rising. Looking ahead, documentation is becoming more important. This is partly because it’s a requirement in Europe, but also because allergy is on the rise and there is a growing need for preventive strategies,” Lotte Neergaard Jacobsen, Pediatric Research Scientist at AFI, tells NutritionInsight.

Gastrointestinal discomfort is more common in infants fed on formula than those who are breastfed. This is because formula contains more protein than human milk, and as protein can be difficult to digest, it can be hard on the infant’s gut. However, milk protein hydrolysates – the result of an enzymatic process in which protein is cut into smaller peptide fragments – can help address these issues.

Industrial enzymatic hydrolysis is similar to the natural breakdown of proteins that takes place in the gastrointestinal system during digestion. Jacobsen notes that production-wise, the process is relatively straightforward.

“However, the outcomes can vary depending on factors, such as the raw material used, enzyme combination and hydrolysis length. This is important because different hydrolysates have different functional properties for infant health,” she says.

Jacobsen further explains that when someone with a milk allergy drinks a glass of milk, the immune system will recognize specific parts of the protein – called epitopes. These can be linear or conformational areas on the proteins. They are not problematic for non-allergic individuals, but in people with allergies, the immune system will react. This eventually leads to degranulation of immune cells, releasing substances such as histamine, and giving rise to allergic symptoms.

“Therefore, in allergy management, it is important to destroy or minimize epitopes, for example, by enzymatic hydrolysis. When ingesting hydrolysates, the immune system of the allergic individual will no longer see the peptides as ‘milk,’ and therefore, they won’t react. In comfort formulas, the theory is that hydrolyzed proteins are already ‘predigested’ by enzymes, and are therefore easier to digest,” she adds.

Click to EnlargeFormula contains more protein than human milk, and as protein can be difficult to digest, it can be hard on the infant’s gut.Growing awareness
According to Innova Market Insights, global launches of formula products with whey protein hydrolysates increased by 8 percent CAGR between 2014 and 2018. Additional consumer research by AFI found that 32 percent of mothers worldwide and 49 percent of those in China, were aware of whey protein hydrolysates. Of those who were familiar with the ingredient, 31 percent expressed a preference for formula containing it.

Jacobsen also notes further regional differences. “In Europe and the US, hydrolysates are used in both Food for Special Medical Purposes (FSMPs) and infant formulas, where they offer benefits for both allergy management and comfort. They’re not particularly widespread in China, where they’re primarily used in FSMPs.”

AFI highlights its portfolio of scientifically proven milk protein hydrolysate products with its Lacprodan and Peptigen ranges. In one study, high-risk infants were either breastfed or given a hypoallergenic formula based on Peptigen IF-3080. There were no significant differences regarding the development of atopic dermatitis or measured immunological outcomes.

Recently, AFI also launched new whey protein hydrolysate, Lacprodan HYDRO.PowerPro, which is ideal for powder shakes and ready-to-drink protein beverages. Joe Katterfield, Health and Performance Nutrition Development Manager at AFI told NutritionInsight that whey protein hydrolysates have traditionally been known for their bitter taste. However, this launch is touted as being 50 percent less bitter than similar offerings on the market.

Meanwhile within the infant health sector, the company launched two maternal supplementation prototypes under the Smart Mama concept to support children’s cognitive development during pregnancy and lactation. The drinks contain milk fat globule membrane (MFGM). Earlier this year, a survey found that as many as 20 percent of pregnant women and mothers were already aware of the importance of MFGM in infant nutrition.

Nestlé Health Science to acquire Aimmune in US$2.6 billion move

31 Aug 2020 --- Nestlé Health Science (NHSc) has entered into a definitive agreement to acquire Aimmune Therapeutics, which is a biopharmaceutical company developing... Read More

27 Aug 2020 --- In a move to increase transparency surrounding its breast milk substitutes (BMS) marketing practices, Nestlé is detailing its compliance with the policy and... Read More