You are in : All News > American Heart Association: High blood pressure and cholesterol in children linked to poor cognitive performance in midlife

17 Aug 2021 --- Good heart health in childhood may lead to better cognitive health later on. These are the conclusions of a longitudinal study highlighted by the American Heart Association (AHA), which found that children with high cardiovascular risk factors into midlife had poorer memory and learning abilities.

This is compared to study participants with better heart health measures throughout their lives. These findings shed new light on the importance of preventative health measures, such as increased exercise, beginning from childhood.

“Lifestyle needs to change at a much earlier age,” says Dr. Mitchell Elkind, former president of the AHA, commenting on the study.

“We need to get the message out there to young people, starting with children. We know the behaviors you adopt in childhood are often the ones that persist throughout life.”

Measuring the impact on the brain
Researchers of the study published in Circulation performed cognitive testing on 2,026 participants aged 34 to 49. They took part in the Cardiovascular Risk in Young Finns Study, which tracked 3,596 children and adolescents for three decades.

The study found that by the time they reached their 40s, children with consistently high cholesterol, high blood pressure and who were overweight performed poorest on all measures of brain health.

Moreover, there was an inverse relationship, with more cardiovascular risk factors linked with poorer cognitive performance. 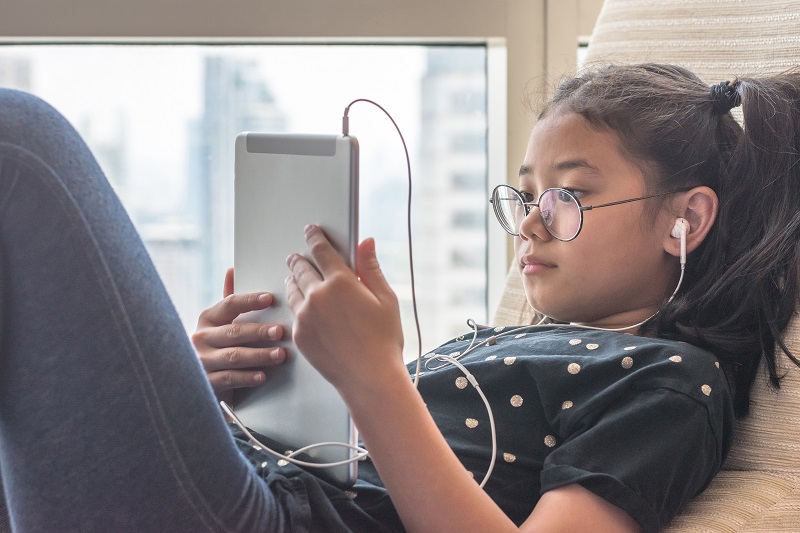 US guidelines for children recommend limiting sedentary time in front of a screen.Tackling obesity in children
Obesity seemed to be a key factor, with researchers finding that study participants who were obese throughout life were less able to process information or maintain attention as they got older.

With increased childhood obesity in recent decades and growing evidence that poor heart health begins to develop as early as childhood, industry and government are strategizing to promote healthier food systems.

Notably, a recent global study found that the body’s metabolism, it’s ability to burn calories, peaks much earlier than previously thought. The study found that it reaches its height during infancy and declines gradually thereafter.

For example, US guidelines recommend children and teens aged 6 to 17 get at least one hour of moderate to vigorous physical activity each day. That hour should include more intense activities at least three times a week to keep muscles and bones strong. They also suggest it is important to limit sedentary time in front of a screen.

In the UK, calls to protect the health of children have led to actions such as the sugar levy on soft drinks, which has led to a 10 percent sugar reduction in certain beverages.

Focus on activity rather than food
One way that researchers recommend addressing heart health in early age is through regular exercise.

While studies show children who are obese have higher mortality and greater heart risks later in life, the added risk disappears if they lose the extra weight when they grow up, explains Gabriel Shaibi, a professor at Arizona State University’s Edson College of Nursing and Health Innovation.

“Many kids don’t get enough physical activity in their daily lives to reap heart and brain health benefits. Regular physical activity – independent of weight – has been shown to have effects on cognitive function, academic achievement and outcomes in general.”

He adds that getting children “up and moving” might be a better strategy than focusing on weight loss, which can be very difficult to achieve.