You are in : All News > Aging well starts young: Natural ingredients star in healthy aging offerings at Fi Europe 2019 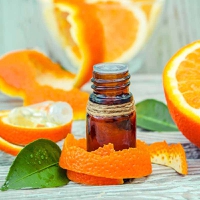 09 Dec 2019 --- According to the World Health Organization (WHO), by 2050 the global population of people over the age of 60 is forecasted to more than double to two billion. The frailty of this population partially hinges on nutrition and the role that macronutrients and vitamins play in the aging process. Suppliers at Fi Europe 2019, held in Paris, France, last week, were clearly taking note of this. Companies spotlighted their ingredient’s efficacy for seniors, as well as younger demographics engaging with preventative aging. NutritionInsight spoke with a number of suppliers on the floor on key aging ingredients, from omega 3 to folic acid and MGCPQQ.

Not only is the general population expected to live longer, but it is also expected to be active and working for longer. The demographics of those living past age 80 is projected to nearly triple to almost half a billion, says WHO statistics. Balanced nutrition is a fundamental pillar for managing the aging process, from bone density to cognition, and aiding healthy living.

“Tailored nutrition has brought healthy aging to the fore. Ingredient suppliers are now moving past just focusing on the adult population, and also looking at earlier ages and how you can negate the negative aspects of aging. This ranges from bone density to skin tone,” explains Tony Gay, Head of Technical Sales & NPD, Nutrition, at Prinova.

Functional foods for the aging
DSM’s bustling stand was showcasing innovative concepts addressing the specific needs of consumers, which were identified in a recently conducted survey. The Global Consumers Health Concerns study involved over 17,000 adults and the results formed DSM’s offerings at the show. Primarily, the needs of aging people were couched within a consumer demand for naturalness and plant-based. 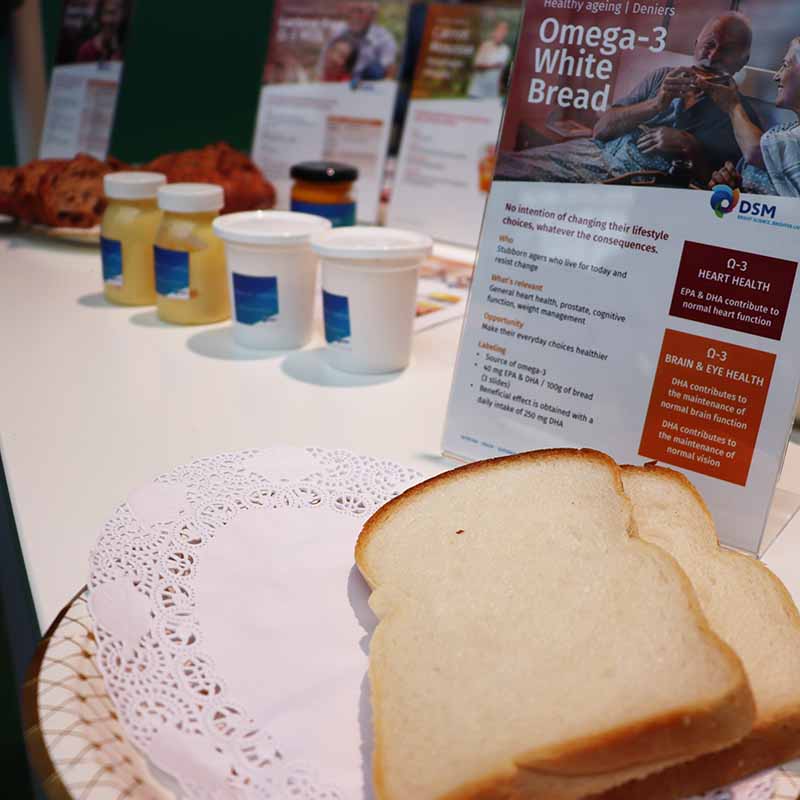 DSM developed an omega 3 white bread, allowing for “denier” consumers to add nutritional solutions to their diet.DSM identified typical eating habits among senior consumers and posited concepts toward them. “A typical [senior] consumer would be a denier, someone who does not want to change their lifestyle. They don’t want to change their eating habits, despite warnings from medical professionals. For example, they want to continue eating white bread even though their doctor recommends eating more fish to get more omega 3 into your body,” says Martin Mei, Segment Lead Food & Beverages, DSM Nutritional Products.

To respond to this, the company developed an omega 3 white bread, allowing for “denier” consumers to add nutritional solutions to their diet without making major changes. The bread can be labeled as a source of omega as there is 40 mg EPA and DHA (eicosapentaenoic and docosahexaenoic acid) per 100 g of bread, which translates to three slices.

Functional foods are gaining an increasingly prominent spot in the food and beverage space. Innova Market Insights notes that there has been a 17 percent increase in food and beverage launches with an “active health” claim, when comparing 2018 and 2017 numbers.

Omega 3 is a key nutrient for the aging process. DHA and EPA not only contribute to normal heart function, but DHA is also crucial for the maintenance of normal brain function and eye health.

“We take pride in really understanding the minds of consumers. We base our solutions on those insights. We have a very broad portfolio of products – vitamins, lipids, enzymes, nutraceutical ingredients, carotenoids and other solutions, mixing these ingredients and providing them as a customized premix, solutions for better shelf-life as well as for coloration,” says Outi Armstrong, Global Head of Marketing Communications, DSM Nutritional Products.

The company also showcased easy-to-swallow concepts. Such products are a major market for seniors, as difficulties around swallowing can arise. Dysphagia not only elevates the risk of aspirating fluids while swallowing but is also often associated with decreased appetite, increasing the risk of malnutrition and inadequate hydration.

Eye and bone health from infants to seniors
A range of eye health solutions were on display on the floor of FiE, with the companies behind them emphasizing how eye health is increasingly a key consumer concern. Notably, the increasingly prevalent issue is one that spans generations, from children to seniors. 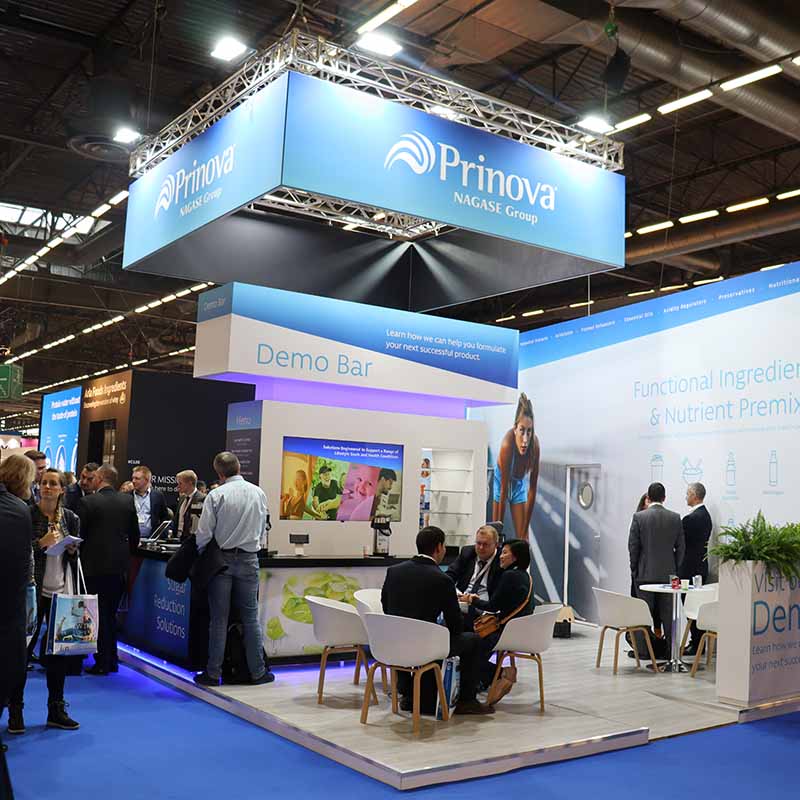 Interestingly, eye health emerged as the number one concern in DSM’s study from parents over their children’s health. “The more someone, or their child, spends time in front of computer screens and other digital devices, the greater the concern,” explains Armstrong.

DSM, as well as nutritional ingredients supplier Prinova, were showcasing concepts for eye health, such as gummies packed full of lutein, zeaxanthin, vitamins C, E and niacin. These ingredients have shown benefits to absorbing blue light and supporting the health of the eye’s retina.

Prinova was exhibiting a range of concepts for all stages of healthy aging. In the bone health space, the company created a soluble beverage premix, including a natural source of plant-based calcium called Aquamin, vegan vitamin D2 and the additional supporting nutrients magnesium and vitamin C.

While for the aging market, it created a vitamin water premix, including Aquamin, vegan vitamin D3 and other supporting nutrients zinc, B6 and folic acid. The drink aims to tackle osteoporosis in older women. The International Osteoporosis Foundation suggests that osteoporosis is prevalent in 21.8 percent of women over 50. Crucially, osteoporosis has been linked to calcium deficiency in the diet. However, the daily calcium recommendation for adults is, at minimum, 800 mg, meaning it can be a bulky undertaking to achieve this through supplementation. 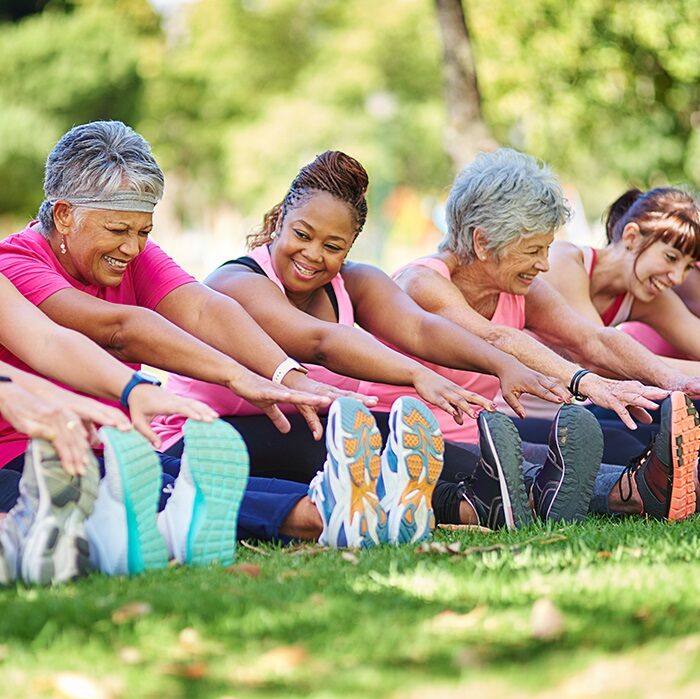 “Ingredients such as Aquamin, the marine based mineral from sea algae, will be a big interest area, especially moving into 2020. This is because it has a plant-based origin, and also alternatives such as calcium carbonate have a negative sustainability impact due to the mining,” explains Gay of Prinova.

MGCPQQ is created through a proprietary fermentation process utilizing bacteria found in nature, in contrast to many other supplement ingredients that are made through synthetic means. Mitsubishi’s manufacturing process keeps the natural characteristics of PQQ intact, those of which you can find in various vegetables and fruits.

“With the European market being so health-driven, it’s important to educate nutraceutical professionals on why mitochondria is important to consumers’ general wellbeing,” says Shoji Matsukawa, General Manager, Organic Chemicals Sales & Marketing, Mitsubishi Gas Chemical America. “MGCPQQ is more than just a cognitive health supplement ingredient and mitochondria is more than just an energy-enhancer. Together they work as a link between anti-aging and improved cognitive health.”

Natural ingredients that tap into sustainability and clean label concerns dominated FiE this year. Nexira unveiled its new brand for premium, sustainable natural ingredients, such as acacia gum and boaba at the show, as well as Kröner Stärke spotlighting natural spelt for its health attributes. Bunge Loders Croklaan also strengthened the infant formula space with the launch of a “next generation” ingredient.