You are in : All News > A grain of change: Biofortification is key to bolstering health and mitigating crop damage

A grain of change: Biofortification is key to bolstering health and mitigating crop damage 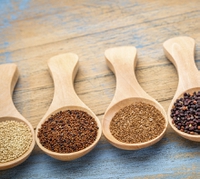 28 Feb 2019 --- An estimated 820 million people globally are malnourished and as actors rally to address the issue, a host of approaches to boost macro- and micronutrient consumption hold potential. One such tool in the malnutrition-fighting toolkit is biofortification. NutritionInsight speaks to key players in the field regarding biofortification’s role in tackling malnutrition and safeguarding the nutritional profile of crops under threat from climate change.

Malnutrition is an umbrella term which includes undernutrition, such as stunting and micronutrient deficiency, as well as obesity, overnutrition and non-communicable diseases. Accessible and cheap interventions, such as the fortification of staple foods with essential nutrients, biofortification and supplementation all seek to address such deficiencies.

“Biofortification can help to improve the nutritional value of crops through conventional breeding, genetic engineering or genome-editing. It is an alternative to adding vitamins or other nutritive elements to conventional crops after harvest,” Holger Elfes of Bayer, Crop Science Division says. This division of Bayer works to shape agriculture through innovations that benefit farmers, consumers and the planet.

Essentially, the biofortification process can make the processing of food easier in countries where commercial food processing is less developed and where people are suffering from heightened malnutrition, Elfes explains. Biofortified foods tend to be crops such as rice, beans, wheat, maize and sweet potato, for example.

However, despite the high potential of biofortification, it does have limitations. The ability of biofortification strategies to reach rural communications is often flagged, for example. Furthermore, some biofortified crops undergo gene-editing and engineering, which can be a red flag for consumers. As such technologies spur products that become commercialized it will be significant to gage the consumer response, notes Brian Loeb, Associate Corporate Investments at Continental Grain.

Bringing biofortification to scaleClick to Enlarge
Biofortification can be a sustainable approach to addressing nutrient deficiencies through enhanced access to nutritious foods, notes Dr. Erick Boy, Head of Nutrition at HarvestPlus.

“What makes biofortification so sustainable is that we and our partners are working in harmony with existing systems, simply plugging into an ongoing process. We work with international and national agricultural research institutes to introduce the new varieties, which farmers then access from private companies, NGOs, or government programs, depending on the crop,” Boy states.

However, the further development of biofortification is not without its challenges, Professor Charles Spillane, Director of the Ryan Institute at National University of Ireland in Galway, notes. Spillane says that in many developing countries, the public and private sector systems for delivering new seed varieties to more impoverished farmers are ineffective, making it a challenge to get biofortified crop varieties to more rural or economically disadvantaged areas.

“The food and beverage industry could consider the financing of programs for the breeding of micronutrient-dense staple crops of the poor as a component of their corporate social responsibility and commitments to Sustainable Development Goal (SDG) 2 (Zero Hunger) and the SDG aspiration of leaving no-one behind,” he suggests.

However, Boy explains that it is the job of HarvestPlus to put biofortification into the farmers’ hands by getting biofortified seeds and technical information to as many organizations as possible.

“We and our more than 400 partners have gone from zero to 33 million beneficiaries in a decade, which demonstrates the relative ease and simplicity of this approach,” he counteracts.

A grain of change
Biofortification strategies can be applied to a range of foods, yet targeting the ones with wide reach makes sense. More than 750 million people do not get enough nutrients from their food and more than two-thirds of those people live in places that consume a lot of rice. This has led to an array of innovative biofortification forays involving the grain because many people rely on it as a staple food.Click to Enlarge

Researchers from Louisiana State University (LSU) have suggested that rice bred for extra protein could hold the answer to boosting nutrient intake, especially in developing countries where protein intake can be below the recommended levels.

The rice, coined Frontière, has a protein content of 10.6 percent, a 53 percent increase from its original protein content. It also requires less heat, time and usually less water to cook.

Lead researcher Herry Utomo, a Professor at LSU, developed the high-protein line of rice. The rice was prepared through a traditional breeding process and was the first long grain, high-protein rice developed for use anywhere in the world, he explains.

However, the researchers did face some R&D challenges. For example, breeding a crop for more nutrients can cause yield to decrease. They tested a total of 20 new lines of high-protein rice to see if any would have a higher yield. Their data showed the new high-protein lines improved yield by 11-17 percent when compared to the yield of the first high-protein line and grain quality characteristics differed. Other challenges included establishing effective methods for inducing mutation, genetic selections in the lab and field performance trials to determine trait stability across different rice growing environments.

The next steps have two main directions, Utomo says. “Because the original line is new to the market, marketing channels have to be put in place. In parallel, research for the next generation of high-protein rice lines is being carried out.” The researchers hope these newer lines can ultimately be bought and grown by more farmers.

Tackling vitamin A deficiency
There is a further potential platform for biofortified rice too. Vitamin A deficiency (VAD), which mostly affects children aged under five and to a lesser extent their mothers, is widespread. According to the World Health Organization (WHO), an estimated 2.8 million preschool-age children are at risk of blindness from VAD and the health and survival of 251 million others are seriously compromised.

Elfes, of Bayer, notes a further rice-based, biofortification innovation: vitamin A-fortified golden rice, which the company invested in. The innovation came when two German professors, Ingo Potrykus and Peter Beyer, proved that they could modify the genome of white rice to produce beta-carotene, the precursor which the human body uses as a source to make vitamin A. This technology was then donated and used in the creation of Golden Rice, notes a study investigating the biofortified grain, published in Agriculture and Food Safety.

Following regular harvesting, grain polishing, storage, cooking and consumption, the human body efficiently converts the beta-carotene in Golden Rice to vitamin A, finds the study, proving its nutritious potential. Further research could investigate combining other micronutrients with the A beta-carotene in the rice, such as folate, iron and zinc.

Climate’s impact on nutritionClick to Enlarge
As knowledge around the impacts of climate change on agricultural practices, the food system and nutrition continues to grow, crop farming has come under the spotlight.

Late last year, a study found that climate change could reduce the nutritional quality of some of the world’s major crops by 2050, especially in Africa. Published in Nature Scientific Reports, the researchers highlighted the need for accelerated development and seed-system distribution of heat-tolerant and drought-tolerant common bean varieties, using techniques such as biofortification.

“Given that diets in Africa rely significantly on plants, there is major cause for concern if climate change leads to lower levels of essential nutrients such as protein, iron and zinc in our diets by 2050. Such loss of dietary nutrients in foods will further aggravate the nutritional deficiency experienced by hundreds of millions of people, particularly the poorest in developing countries in Asia and Africa,” says Dr. Andy Jarvis, from the CGIAR Research Program on Climate Change, Agriculture and Food Security.

For the poorest in society (particularly in rural areas) who suffer from micronutrient malnutrition, the breeding and supply of micronutrient-dense staple crops could be an effective route to reaching these people and communities, lead scientist of the study, Professor Charles Spillane, Director of the Ryan Institute at National University of Ireland, Galway, says. These communities are also likely to be some of the most harshly affected by the rapid onset of climate change.

The cultivation of drought-resistant crops was also flagged as an imperative future focus in a report recently released by Knorr and The World Wide Fund for Nature (WWF). Coined the Future 50 Foods report, the companies teamed up with scientists, nutritionists and agricultural experts to offer a “tangible solution” to monotonous diets that threaten biodiversity: 50 foods that the global population should eat more of to promote a sustainable global food system. Included in the list were cacti, which can tolerate arid climates and drought, and grains such as Fonio, which is drought resistant and can grow in sandy or acidic oil.

The potential of biofortification in delivering nutritionally-enhanced foods to both rural and urban areas seems strong. Key to success will be the continued use of multi-sectoral approaches, especially in reaching the most rural areas where micro- and macronutrient deficiencies can be the most pronounced.

30 Jul 2021 --- Half of US adults living with some form of diabetes are not consuming enough protein, which could be contributing to muscle loss and physical limitations. This is... Read More