You are in : All News > Soda’s popularity on kids’ menus beginning to fizz out

Soda’s popularity on kids’ menus beginning to fizz out 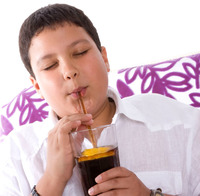 25 July 2017 --- The percentage of major restaurant chains that offer sugary drinks on their children’s menus has decreased from 93 percent to 74 percent since 2008, according to a new report by the Center for Science in the Public Interest (CSPI). But the consumer lobby group warns that despite the significant decrease, chains owe it to families to improve their children’s beverages even further.

Of the 50 top restaurant chains CSPI analyzed, 38 had designated children’s menus that included beverages.  Of those, 74 percent included sugary drinks (soda, lemonade, sugar-sweetened juice drinks, and other beverages with added sugars) on their kids’ menus.

“CSPI is asking restaurants to do better by children and families,” said CSPI nutrition policy director Margo G. Wootan.  “Kids consume a quarter of their calories from restaurants, and sugary beverages are a top source of calories, contributing zero nutritional value and promoting obesity.”

“Restaurants have the power to change the food environment for the better and set kids up to make healthy eating – and drinking – a habit from a young age," says CSPI nutrition policy director Margo G. Wootan.

Removing all sugary beverages from kids’ menus is proving not to be a business killer for restaurants. In fact, more than a half-dozen large restaurant chains have already promised to remove soda and other sugar-sweetened drinks from their kids’ menus, including McDonald’s.  McDonald’s sold 21 million more low-fat and fat-free milk jugs and 100 percent apple juice boxes in the first 11 months after removing sodas from the Happy Meal section of its menu boards than it had during the same period a year earlier.

CSPI has made three recommendations for restaurants to improve beverage offerings to children, and thus improve children’s health.  First, chains are encouraged to change the default beverages to healthy options for children’s meals, such as low-fat milk or water.  Second, the group says chains should ensure that all beverages – and foods – on the children’s menu comply with the National Restaurant Association’s Kids LiveWell nutrition guidelines.  Third, CSPI advises that restaurants should only advertise and market to children if all the beverages and foods included on the children’s menu are healthy throughout all marketing approaches. These approaches include television, websites, in-store promotions, toy giveaways, and school-based marketing.

In addition to McDonald’s, US fast food chains Wendy’s, Burger King, Dairy Queen, Applebee’s, IHOP and Jack in the Box have committed to removing soda and other sugary drinks from their children’s menus.  CSPI and other health groups – joined by parents, health professionals and progressive stockholders – have urged such changes through petitions, e-mails, letters, in-person meetings and shareholder actions.  In addition, US areas such as Stockton, Davis, Perris and Santa Clara County in California have passed laws requiring that restaurants in their communities offer healthier beverages as the default with children’s meals.

Sugary drinks have long been named as a key contributor to obesity in the young, and research into the health issues caused by this obesity keeps piling up. Adolescent obesity was recently linked to colorectal cancer risk later in life by new research published in CANCER, a peer-reviewed journal of the American Cancer Society.

According to some studies, young people’s liver health may also be affected by sodas. The sugary drinks are known to be a major source of dietary fructose among children and adolescents, and researchers from the UK and Italy have suggested that high levels of dietary fructose and uric acid may be key in the development of poor liver health amongst children and adolescents.

10 Feb 2020 --- After just two years of being on the UK and Irish markets, Nestlé will no longer make Milkybar Wowsomes, milk and white chocolate boasting 30 percent reduced... Read More

06 Feb 2020 --- Consumers are increasingly being lured by better-for-you and clean label sweets and snacks, with natural ingredients and vegan positionings set as key growth... Read More

06 Feb 2020 --- The addition of fruits and vegetables to confectionery is adding an aura of health to indulgent delights. As consumers seek sweetness from naturally derived... Read More