You are in : All News > Have your cake and eat it too: Refined grains are absolved of their link to disease, expert says

25 Jul 2019 --- Refined grains have commonly been pegged as having no significant nutritional value and have been linked to obesity and diabetes. Whole wheat options are the prudent choice, as outlined by science, and offer far more nutritional benefits without adverse health effects. New research, however, has posited that refined grains have been “given a bad name” because they are usually combined with other less healthy food components. The study’s lead author, Glenn Gaesser, Professor of Exercise Science and Nutrition in the College of Health Solutions at Arizona State University, US, spoke to NutritionInsight about the “bad reputation” refined grains have been “falsely” given.

The study, published in Advances in Nutrition, discovered that the number of calories consumed is more significant than their source. The research noted that current dietary recommendations to reduce refined grain consumption conflict with the substantial body of published scientific evidence.

“I systematically looked at ‘meta-analyses,’ and these are studies that focus on a collective look at all the previous relevant studies, so one gets a consensus. There wasn’t a single study that found refined grain intake was associated with risk of death or chronic diseases. These studies very compellingly showed that it is not refined grains that are the problem,” Gaesser says.

Click to EnlargeGlenn Gaesser, Professor of Exercise Science and Nutrition in the College of Health Solutions at Arizona State University, US.He also notes that in the US, white bread is fortified with a lot of nutrients that Americans lack. Cutting out all of the refined grains would mean also cutting out those good nutrition fortifications. He argues that this is the issue with “blanket recommendations” to abstain from processed grains. A good message, he advises, would be to try to increase whole grain consumption and to be more selective in the type of refined grains people consume. “I don’t want it to seem like I’m advocating people eat cookies and cakes all the time, but we just don’t have real clarity about the definition of refined grains in comparison to indulgent grains,” Gaesser muses.

“If I could give the industry one recommendation, it would be to try to create products that are tasty and also have a higher amount of whole grain in the product. This may not necessarily 100 percent whole grain, but they can be creative with their nutrition scientists. They can create products that have a higher nutrition density but also are appealing to the public,” he adds.

Guilty by association?
Chronic diseases such as obesity, cardiovascular disease, diabetes, cancers are influenced by things we do like exercise – or lack thereof – and the types of foods that we eat, Gaesser says. “The reason why we have an impression that refined grains are bad for our health has to do with how they’re evaluated in the research community,” he further highlights.

Gaesser systematically reviewed the outcomes of studies that looked at refined grains as a distinct food source separate from the Western dietary pattern. All the research showed that refined grains are rather benign in terms of their health outcome impacts. This means that they are guilty by association with some of the ingredients in the western dietary pattern, which are really to blame, according to Gaesser.

The most notable dietary ingredients would be red and processed meat and sugar-sweetened food and beverages in some cases. “I think it’s unfair to blame refined grains for negative health outcomes when there’s no evidence to support that point of view when examined as a separate entity,” he notes.

When it comes to whole grains, however, he notes there is no question that whole grains are generally richer in most nutrients, although there is a caveat for specific nutrients like B vitamins and iron that are higher in fortified refined grains. Overall, because whole grains have more of the natural ingredients – the healthy phytochemicals left in the product – they are scientifically proven to be healthier.

Can refined grains be part of a healthy diet?
Refined grains in the research studies used in the meta-analysis included staples like bread, cereals and pasta, alongside indulgent grain sources such as cookies, cakes, doughnuts, brownies and pizza. But if refined grains are not to be blamed, can they then be part of a healthy diet? Gaesser says potentially yes, but within reasonable consumption and not when they are accompanied by other less healthy food components.

“I’ve found that refined grains as a whole are not associated with adverse health outcomes but I don’t think anyone could classify a cookie or a brownie as a health food. When you include them in the refined grain category, it can be seen that there are no adverse health effects when consumed in moderation,” he notes. 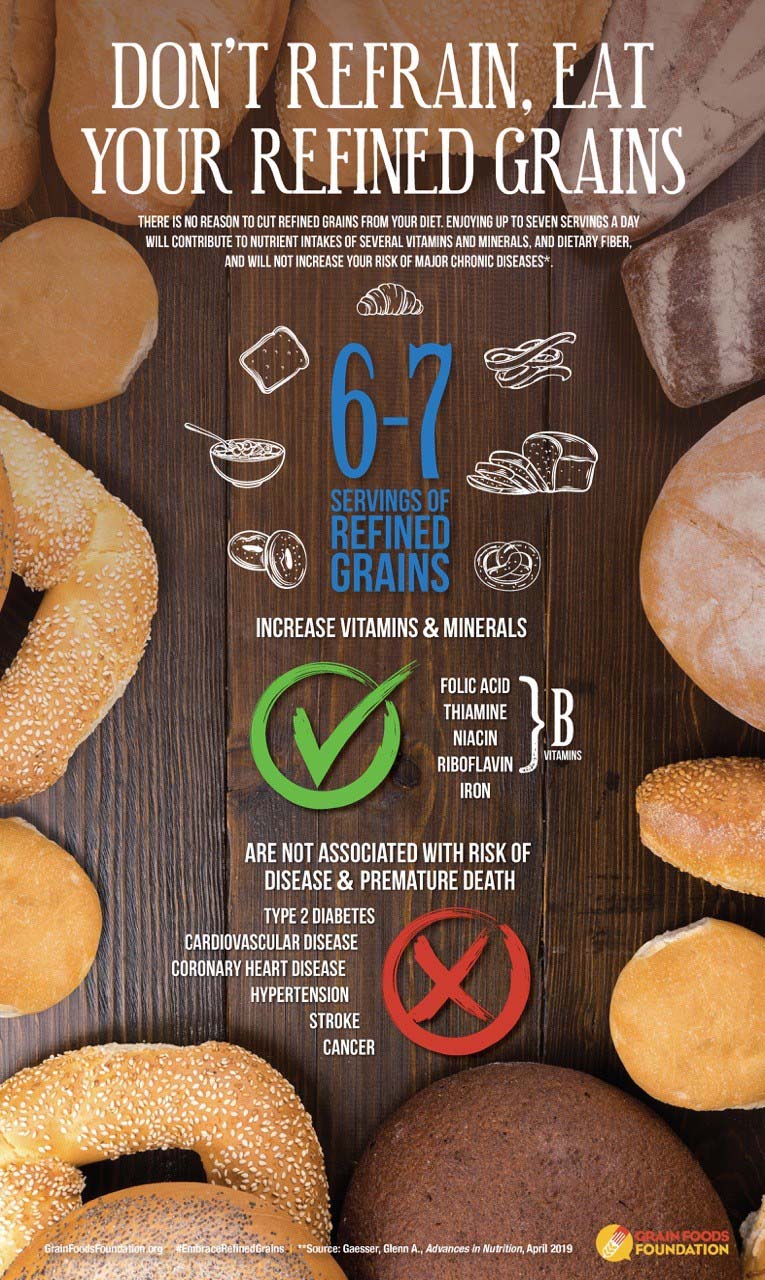 Click to EnlargeWhen it comes to whole grains there is no question that whole grains are generally richer in most nutrients, Gaesser says.Regarding obesity, Gaesser asserts that it’s just a matter of total calories. If someone is consuming a lot of refined grains and they are obese, then the question would be whether it is because they are simply eating too many calories. Most studies agree that it is the number of calories and not the type that influences obesity.

The information on whole grains is quite compelling, however, with an increase in consumption being associated with positive health outcomes. These include the reduced risk of dying prematurely, cancer (especially colon), CV disease, Type 2 diabetes, he notes.

“I would be in favor of a public health message that recommended consuming more whole grains, but without any specific recommendation for cutting back on refined grains. The studies that examined refined grains looked at dose-response relationships, looking at individuals who were consuming as much as six to seven servings a day. There were no bad health outcomes in regard to that level of consumption,” Gaesser explains.

Moving forward, it would be helpful for researchers to separate out the staple grains from the indulgent grains, he says. For example, they should examine how individuals who consume lots of bread and pasta differ from those who consume lots of indulgent grains. “You might find a clear-cut difference in the health outcomes, but those types of studies just haven’t been done.”

Moving forward, Gaesser says he would like to see more research that allows us to understand the difference between indulgent grain foods and stable grains in terms of specific contributions to health. This would allow industry to make more informed decisions on how to get people to eat healthily, while also enjoying their food.

13 Apr 2021 --- Blood sugar dips occurring between two to four hours after eating could be causing increases in hunger and resulting in overeating and excessive weight gain in... Read More