In brief: Market
Leading supplier of functional lifestyle and sports nutrition products, SternLife, is going organic. Sales revenues of organic foods in Europe continue to rise, which the company says prompted the creation of organic products. In addition to traditional drivers like the dry foods category, which includes cereals, trend categories like protein bars and shakes are also growing. “The rising demand for organic products is becoming more and more obvious in health and fitness-related categories,” notes Marc van Essen, Sales Director at SternLife. “We offer a large part of our range in organic versions as well. From vegan protein bars and protein shakes to breakfast and fitness shakes to smoothie powders, we provide high-quality functional food made with organically grown raw materials, with a difference you can taste.” The company also develops exclusive organic product lines for major brands from an extensive range of organic raw materials, such as protein sources from pea, rice, hemp, sunflower and pumpkin, or milk and whey.

In brief: Awards and certifications
Gnosis Bioresearch SA has obtained a Schouten Certification for its Adogran ingredient. The certification concerns the compliance to international standards for the production of ingredients intended for animal nutrition. Adogran is a formulated bulk powder consisting of coated granules containing SAMe that protects the active ingredient from possible interactions with environmental factors and/or other ingredients added to finished formulations, guaranteeing availability of the active substance when it is orally taken. Schouten Certification BV is an independent certification body that supports companies in the pet foods and feeds chains with objective and expert audits and inspections.

Nektium has been awarded the New Product Innovation Award for its caffeine replacement ingredient, Zynamite, at Frost & Sullivan’s annual European Best Practices Awards Banquet, held in London earlier this month. Amongst many high-tech solutions, the only natural product that was honored at the event was Zynamite – as “European Sports Nutrition and Health Ingredients New Product Innovation.” The product demonstrated significant ergogenic and nootropic properties including faster reaction time and improved mental and physical performance. It is a safe, botanical and sustainable alternative to caffeine, with nutritional benefits that are superior to those of competing natural extracts, according to Frost & Sullivan. The Best Practices Awards are presented each year to companies that are predicted to encourage significant growth in their industries and have identified emerging trends before they became a marketplace standard. 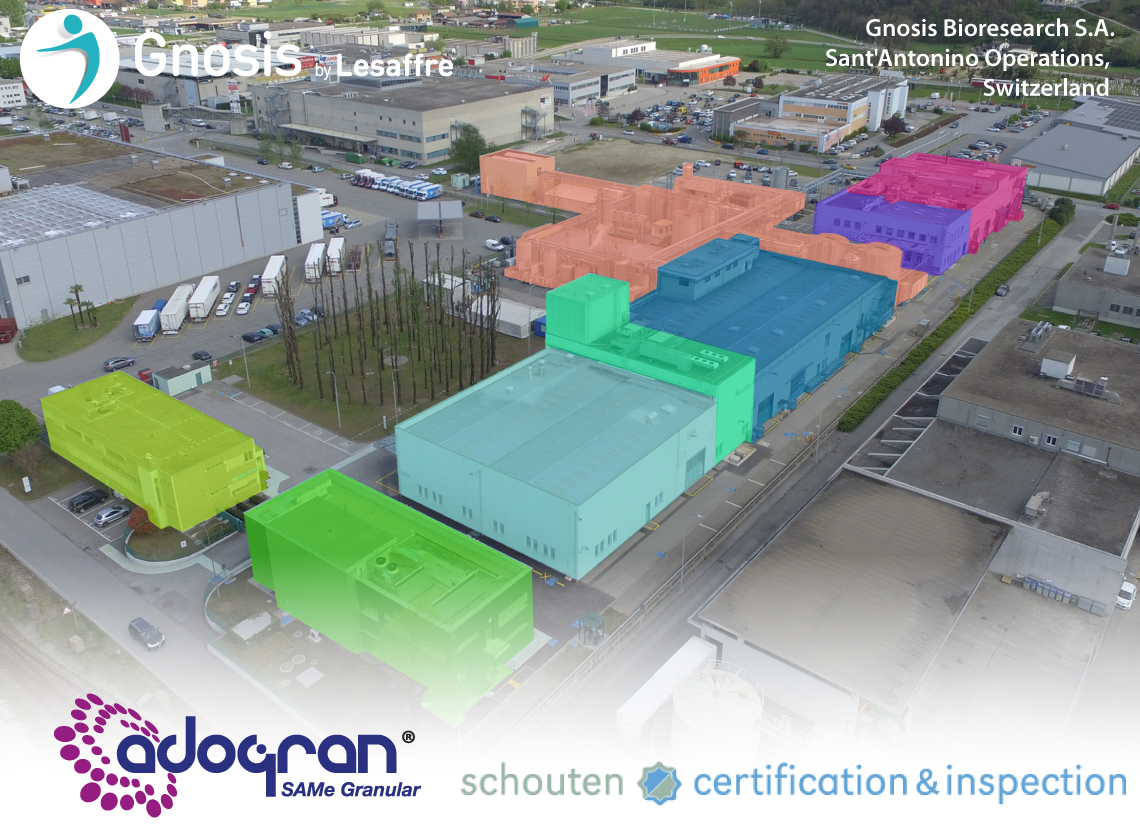 Click to EnlargeGnosis Bioresearch has obtained a Schouten Certification for its Adogran ingredient. In brief: Business newsArcadia Biosciences Inc., a food ingredient and agri-innovation company, has announced the closing of its previously announced registered direct offering of 1,489,575 shares of its common stock. The offering was priced at-the-market at a purchase price per share of US$4.91, for gross proceeds of approximately US$7.31 million. Additionally, in a concurrent private placement, Arcadia issued unregistered warrants to purchase up to 1,489,575 shares of common stock, representing 100 percent of the shares of common stock purchased in the registered direct offering. Each warrant was sold at a price of US$0.12 per underlying warrant share for gross proceeds of approximately US$0.19 million. Each warrant has an exercise price of US$5.00 per share, is exercisable immediately and will expire five and a halfyears from the issuance date. H.C. Wainwright & Co. acted as the exclusive placement agent for the offering.

In brief: Research news
A Florida State University researcher is exploring the effects of chronic alcohol consumption on cancer cachexia, a common condition cancer patients suffer from, characterized by the loss of muscle mass. Assistant Professor of Nutrition and Exercise Science Jennifer Steiner has received a US$750,000 grant from the Florida Department of Health to investigate how drinking excessive amounts of alcohol before and during treatment can affect the development of this debilitating condition. Steiner, who worked in a cancer center during a dietetics internship, saw many patients suffering from this syndrome despite efforts to optimize nutritional interventions. Steiner and her students will investigate two models of alcohol consumption. The first will focus on how chronic alcohol consumption (more than three drinks per day for women and four for men) that occurs prior to cancer development affects the severity of cancer cachexia. The second model will look at the effects of continuing to consume alcohol throughout chemotherapy.

16 Mar 2021 --- In pre-pandemic times, many considered immune health to be a seasonal issue, targeting mostly seniors and vulnerable consumer groups. However, the COVID-19 pandemic... Read More

04 Mar 2021 --- Despite addressing demands as ancient as humanity, the women’s health space has never looked so modern. The sector is continuing to evolve in tune with busy... Read More