You are in : All News > THC levels too high in many hemp-containing foods, analysis finds

THC levels too high in many hemp-containing foods, analysis finds

04 Dec 2018 --- The levels of tetrahydrocannabinol (THC), considered the psychoactive ingredient in marijuana, in many foods containing hemp may be above the guideline values, a German Federal Institute for Risk Assessment (BfR) analysis has concluded. The analysis calls for manufacturers of hemp-containing foods to keep THC levels as low as possible, and highlights how unreliable working with THC products can be.

Tetrahydrocannbinol is one of the 113 cannabinoids identified in cannabis. Except for seeds and roots, the entire hemp plant contains glandular hairs which produce a resin containing cannabinoids.

“In the case of tea-like products containing hemp, which consist in particular of hemp leaves and possibly hemp blossoms, THC is considered an ingredient. The THC content is subject to large fluctuations depending on the hemp variety and various environmental factors,” a BfR spokesperson tells NutritionInsight.

“From the point of view of the BfR, it is doubtful whether the contents in this food can be reliably reduced in order to avoid exceeding the guideline values in the corresponding hemp-containing foods or exceeding the acute reference dose (AfRD),” they add. 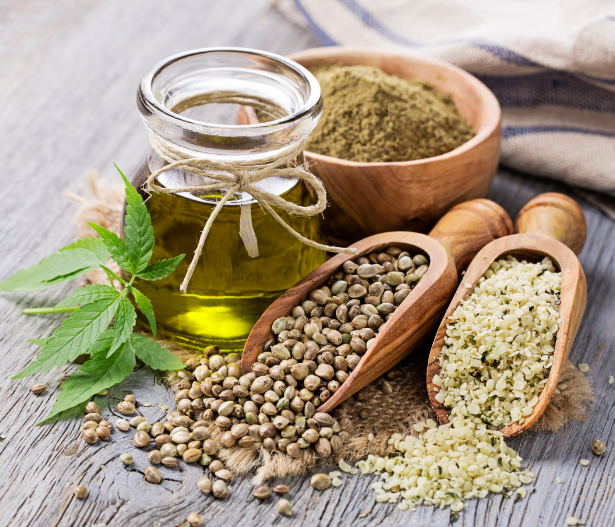 Click to EnlargeTetrahydrocannbinol is one of the 113 cannabinoids identified in cannabis.The AfRD, as described by the European Food Safety Authority (ESFA), is 0.001 milligrams (mg) of THC per kilogram body weight. This denotes the quantity of THC that can be ingested over short-term periods without the expectation of any psychogenic effects.

However, despite the EFSA guideline, the analysis disputes that products containing hemp can be reliably produced due to the large fluctuations in THC levels per plant part. It also notes that the analysis was unable to assess whether this knowledge is available to all manufacturers and retailers in the hemp-food market.

“Special hemp varieties with low contents of THC have been bred for the production of hemp-containing foods. However, the THC content is also subject to large fluctuations depending on the hemp variety and various environmental factors. There is no hemp that does not contain THC,” the spokesperson explains.

As the occurrence of reduced psychomotor effects, such as slowed reactions or tiredness, can reasonably be expected with the consumption of many foods containing hemp, restrictions in driving ability or using heavy machinery could be considered.

The reduced psychomotor effects can also be enhanced by the consumption of alcohol and certain other drugs. Therefore, in the opinion of the BfR, the levels of THC in hemp-containing foods should be further minimized.

“It is assumed that cannabinoids are usually not formed in the seeds and roots of hemp plants. Therefore, THC occurring in small quantities in hemp seeds or hemp seed oil is regarded as contamination due to contact with plant parts containing THC. From the point of view of the BfR, the contents in the seeds of the hemp plants and the foodstuffs produced from them can, therefore, be reduced by suitable procedural measures. Thus, it would be possible to avoid exceeding the guideline values in the corresponding foodstuffs or to avoid exceeding the ARfD,” the spokesperson concludes.Click to EnlargeHemp tea can contain high levels of THC.

The “mainstreaming” of cannabis?
As a host of US states and Canada legalize, in some form, the use of medical marijuana, leading to more relaxed regulatory situations, a number of cannabis-infused products have recently hit the market. Innova Market Insights data show that of the global food & beverages and supplement product launches featuring CBD in 2018 so far, the US accounts for 76 percent of launches.

The growth of cannabis and hemp products is expected to rise as they gain increasing consumer and regulatory acceptance. The health benefits associated with marijuana plant extract cannabidiol may also drive the growth. A Canadian Research Institute of the McGill University Health Centre (MUHC) and McGill University study pinpointed the effective dose of marijuana plant extract cannabidiol (CBD) for safe pain relief without the typical “high” or euphoria produced by the THC, further underlining the compound’s potential in offering relief to chronic pain sufferers.

These researchers similarly noted some difficulties in working with cannabis due to the variable content level of THC. “Several companies are working on CBD, trying to create new CBD formulations that can be patented. Many companies are also attempting to create products with 100 percent of pure cannabidiol without any THC, but the extraction is still a challenge since cannabis plants (sativa and indica) produce a percentage of THC and a percentage of CBD, with a very variable content,” Danilo De Gregorio, a Post-Doctoral Fellow at McGill University told NutritionInsight at the time.

Regarding recent market launches, House of Saka has launched a line of cannabis-infused, alcohol-removed wines from Napa Valley. The wines will be available in over 600 stores throughout California and Nevada starting mid-2019, before expanding nationwide and globally. The company is launching a Sparkling Brut Rosé and a still Rosé wine, both infused with a proprietary formulation of tasteless, odorless water-soluble ratio of THC and CBD derived from organic craft cannabis, according to Saka Wines.

Meet Harvey and Harvetta: The virtual humans shaking up personalization

04 Jun 2020 --- Flavors and fragrances heavyweight Symrise has developed a cannabinoid that the company expects will “revolutionize the pharmaceutical market.” Coined... Read More

03 Jun 2020 --- The American Society for Nutrition (ASN) is using its virtual conference Nutrition Live Online 2020, held from June 1 to 4, as a platform to address critical topics... Read More