You are in : All News > Specific Milk Protein May Boost Body's Defenses Against Degenerative Diseases 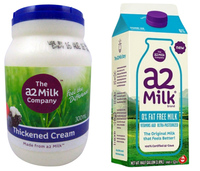 08 Dec 2016 --- According to an innovative, new investigation published in Nutrition Journal, cow's milk containing only A2 protein has been shown to increase an essential antioxidant that may help strengthen the body's disease-fighting power. In the first human clinical trial of its kind, scientists found that milk naturally containing only the A2 type of beta-casein protein – rather than both the A1 and A2 found in most ordinary milk – doubled the concentration of glutathione (GSH) in healthy adults.

GSH is a critical part of the body's internal defense system which is responsible for protecting a variety of functions. Most notably, it helps the body ward off diseases associated with abnormal cell differentiation, such as those that are neurodegenerative or lead to a condition like pancreatitis or cancer.

"It was quite remarkable to find that consumption of milk containing only the A2 type of beta-casein protein produced measurably higher blood levels of the antioxidant glutathione as compared to conventional milk (which has a combination of A1 and A2 proteins). While we have previously shown that opiate peptide from the A1 protein in conventional milk can affect glutathione levels in cultured cells and lab animals, it is satisfying to see these effects in people," said Richard Deth, PhD, lead researcher and Professor of Pharmacology in the Department of Pharmaceutical Sciences at Nova Southeastern University.

Dairy foods have been shown to play a role in GSH synthesis, and previously, animal studies have only associated A1 protein with reductions in GSH production. To explore the impact of the absence of A1 protein on the antioxidant's concentration, the team of nutrition researchers enlisted 21 healthy men and 24 healthy women in a two-phase crossover study. During the randomized, double-blind, controlled trial, subjects consumed eight ounces (one cup) of milk with either A1 + A2 protein or A2 only, twice a day. Researchers assessed differences in plasma GSH concentrations and beta-casomorphin-7 (BCM-7), a peptide produced by the breakdown of A1 protein and thought to reduce GSH concentrations. Results showed that when consuming A2-only milk, GSH was significantly higher (4.01 ± 0.61 nmol/mL for milk containing A2 β-casein compared with 1.99 ± 0.50 nmol/mL). No significant difference between groups in BCM-7 was detected. The results were interpreted as an indication that consuming milk with A2 protein only may actually ramp up GSH production.

Depending on a cow's genetic makeup, milk contains either A1 or A2 type beta-casein proteins, or a mix of both. Conventional dairies combine all ordinary milk at processing so what's available on market shelves is A1/A2 milk. Through a simple genetic test, cows can be identified as either A1/A1 producers, A1/A2 producers or A2/A2 producers. Once identified as A2-only producers, these cows can be segregated from the herd where their milk is collected and processed separately to result in milk that only contains the A2 type of beta-casein protein (free-from A1 protein). Recent studies show that these two proteins digest quite differently from each other and, for some people, the presence of the A1 protein can result in discomfort after drinking milk. Thus, milk containing only the A2 protein may provide a natural way to reduce the symptoms associated with post-dairy digestive discomfort.

"As a registered dietitian, I am encouraged by the public health potential of these findings," comments a2 Milk Vice President of Scientific Affairs Bonnie Johnson, MS, RD. "And it's likely scientists have only scratched the surface when it comes to the potential effects that specific types of dairy proteins may have on health and wellness."

Dr. Deth added that, "From earlier research we could appreciate how important glutathione is for combating inflammation and how critical it is for normal brain development and function. The fact that something as simple as milk helps fuel glutathione production could have great implications for recommended dietary patterns in the future."

25 Nov 2020 --- Consumer expectations for novel supplement delivery formats are maturing in tandem with their growing awareness of the role that nutrition plays in health and... Read More

23 Nov 2020 --- With health currently at the forefront of most people’s minds, it is no surprise that wellness and immunity are dominating the virtual floor at this... Read More

17 Nov 2020 --- The availability of proteins, carbohydrates and fats in a country’s food supply correlates with national mortality patterns, according to a new global... Read More