You are in : All News > Race for pale algae: Neutral taste and color enable plant-based fortification

Duplaco Gold is in the fish-free nuggets’  breadcrumb coating (Credit: Monkeys by the Sea).

In this space, NutritionInsight speaks with Duplaco and Allmicroalgae, who are each developing new forms of the ingredient offering more subtle color and taste characteristics.

“We’re currently in the R&D phase, working to introduce a white version in the next six months. Of course, there’s no guarantee,” says Marieke Smidt, commercial director of Duplaco.

“This is especially desirable for people following plant-based diets, who often lack these vitamins. Duplaco Gold is also rich in fiber. In the Netherlands, for example, many people are deficient, which can have negative impacts on gut health,” explains Smidt.

Therefore, Duplaco is positioning its algae as a vegan-friendly and clean label ingredient for the fortification of products like pasta, baked goods and meat alternatives. 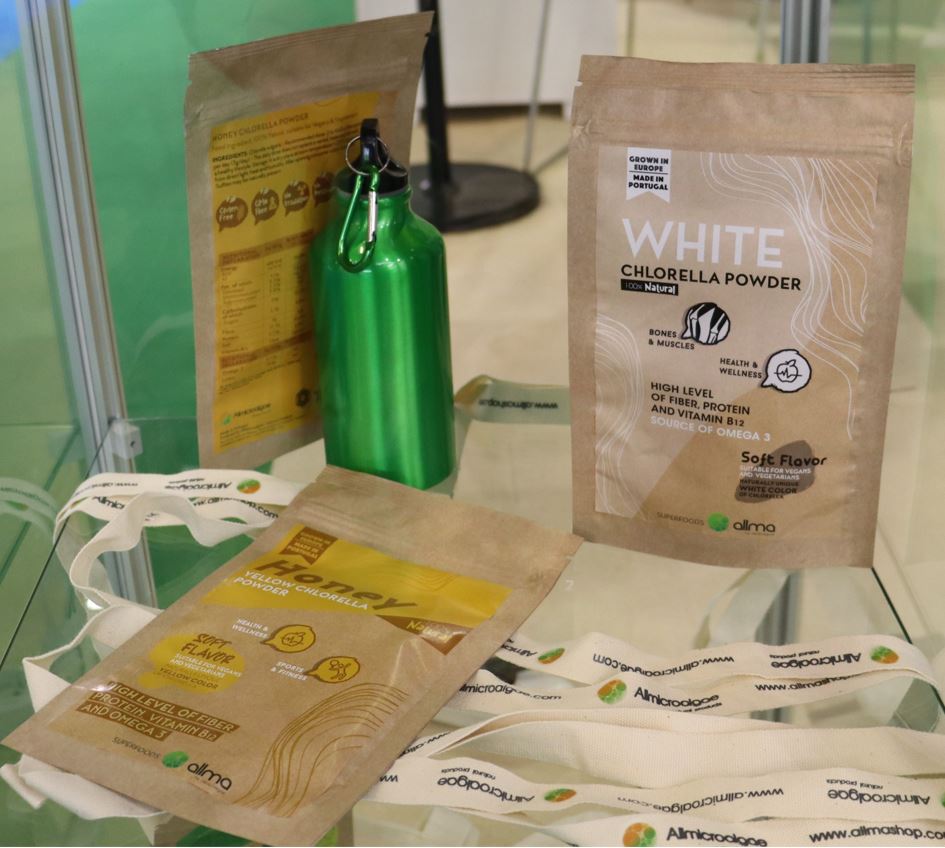 Allmicroalgae’s white and honey Chlorella powders were recently on show at Fi Europe 2021.

Harnessing GMO-free methods
Allmicroalgae already offers honey and white forms of Chlorella vulgaris. Both are obtained through the isolation of lighter strains under stress conditions.

According to the company, this GMO-free manipulation is commonly used as a way to speed naturally-occurring selection. The final product is a stable strain with similar productivity but a lower chlorophyll content, which translates to a milder taste and odor.

“Imagine if you want to add microalgae to ice cream or yogurt – now you don’t need to worry about the strong flavors or odors of algae. People can be reluctant to trying microalgae because of the flavor,” explains António Saraiva, commercial manager at Allmicroalgae.

“Right now, we are the only company producing white Chlorella, but other companies are producing yellow versions,” he adds.

Room for everyone
However, Smidt says there is no reason for other companies to be nervous about Duplaco’s launches. “I predict the microalgae market will grow, so there is plenty of space for all of us.”

She continues that major food companies also prefer to have a second supplier. “For example, even if they work with us and we are reliable, they always like to have another option. Therefore, it’s good that companies are building the market and creating a choice, so food companies don’t have to depend on just one supplier.”

Smidt has spoken to companies that were planning to introduce products using other businesses’ paler microalgae, but then these suppliers could not deliver. “The companies say that they will never bet on just one supplier anymore because it delays everything – especially after you have spent a lot of time and money.”

Production logistics
Smidt also highlights Duplaco’s unique production methods, which use a closed fermenter. In doing so, many algae can be grown in a small space, unaffected by sunlight, weather and climate conditions. This eliminates impurities and quality fluctuations and saves customers the long transport routes, including delivery problems.

“We are the only company that has a growth rate of 100 g per L per day. We cultivate liquid at 10% dry weight, which is very high in comparison to other companies in this space,” Smidt explains.

Additionally, other players often introduce all the growing mediums right at the beginning of the process. “You can imagine that at this point, there is an ‘overkill’ of nutrients in the batch, which is not ideal for algae growth.”

“In contrast, Duplaco’s methodology means that we can maintain the circumstances for algae to grow at a constant ideal level, thus translating into a high growth rate.”

Duplaco Gold (right) is much paler than standard versions of algae (left).

Ambitious goals for the future
Looking ahead, Duplaco’s developers will work on Chlorella with an even higher content of protein – and on making production even more cost-efficient.

Duplaco also plans on supplying fresh liquid Chlorella, which can constitute up to 30% of a meat alternative – and correspondingly boost its protein content.

Meanwhile, Allmicroalgae recently teamed up with Algaplus on Algaessence, which targets immunity.

In other moves in this space, Provectus Algae secured US$11.4 million in a pre-series A funding round for its natural and biosynthetic specialty ingredients.