You are in : All News > PLT Health positions propolis ingredient as “something different” amid glut of “me-too” immunity products

Amid a rapidly growing immunity market, Promunel is “by no means a ‘me-too’ product” Steve Fink, vice president of marketing at PLT Health, tells NutritionInsight.

“[Promunel] is something different. For the last six months, people have been writing about beta-glucans, vitamin D and echinacea. We’re not catching up [to the immunity trend] – we’re moving into new territory.”

Propolis has been shown to provide anti-fungal and antibacterial properties to beehive nests – which is also the basis for many of its health-promoting properties for human health.

Respiratory health benefits of propolis
Propolis has been used medicinally since antiquity, with honey-infused tea being a common home remedy against the flu.

Fast forward a few millennia, research is suggesting propolis may have a role to play in combating upper respiratory tract infections (URTIs) and potentially also COVID-19.

In a clinical study supported by PLT Health, test subjects with mild URTIs received Promunel as an oral spray thrice daily. After three days of treatment, 83 percent of subjects treated with propolis oral spray had remission of 43 symptoms. 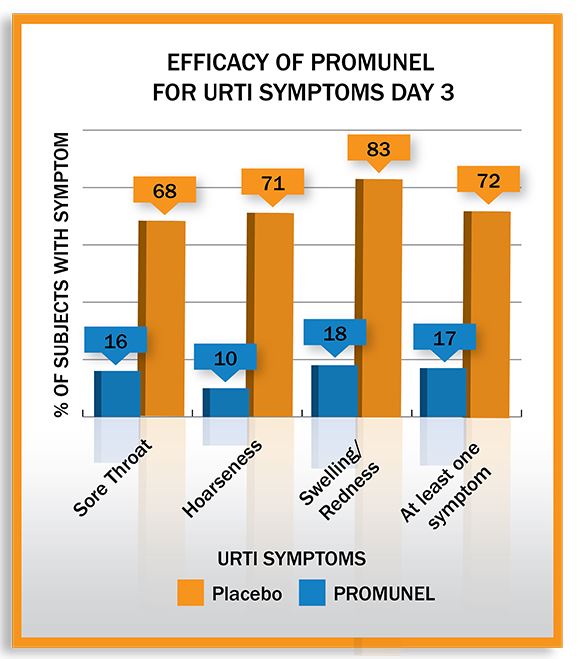 Click to EnlargePromunel demonstrated in a clinical study that it can reduce URTI symptoms after three days.In contrast, 72 percent of subjects in the placebo group had at least one remaining symptom.

Healing from uncomplicated URTIs took place two days earlier, instead of taking place in five days as recorded in the control group.

In separate research findings, an India-based study revealed natural compounds from propolis and ashwagandha could potentially be used as an effective tool against the novel coronavirus.

In August, a study also found honey could be used as an alternative to antibiotics in certain cases of URTIs – but not against COVID-19 specifically.

Promunel can be formulated via a broad range of delivery systems, including sprays, lozenges, softgels, tablets, capsules, gummies, chews and stick packs.

From raw resource to end-product
Propolis had been in PLT Health’s NPD pipeline for some time, but the company decided to accelerate the ingredient launch “because the market is looking for fresh, new concepts in immune health,” says Fink.

The B Natural MED process purifies the raw material, removes waxes and resins, and involves extraction and concentration to create a base ingredient that contains up to 50 percent polyphenols.

This process is standardized on the six most bioactive polyphenols in propolis: chrysin, galangin, pinocembrin, apigenin, pinobanksin and quercetin.

The MED technology is crucial for Promunel production as the composition of commodity propolis varies dramatically based on geographic region, local flora, season of the year and bee variety.

Click to EnlargeHoney in tea is a long-time home remedy for warding off the flu.Propolis function in the beehive
Propolis is usually used as a sealant for open spaces in the beehive. Honeybees create the resinous substance by mixing saliva, beeswax and exudate gathered from trees and other botanical sources.

“In a beehive, more than 300 active compounds contained in propolis – also known as ‘bee glue’ – help create an aseptic environment to preserve the health of the colony against a range of potential pathogens,” explains Sid Hulse, vice president of product development at PLT Health.

“Despite having 50,000 inhabitants, a humidity of 90 percent and an internal temperature of nearly 100° F, the beehive is one of the most sterile environments in nature. Propolis functions as the hive’s immune system,” he adds.

Protect pollinators
Beyond just sentiment, consumers’ relationship with bees is important to the future of the species – and the planet. PLT Health affirms that Promunel supports the beekeeping industry and responsible bee-keeping husbandry.

“In a world where wild bees are disappearing at alarming rates, it seems as if beekeeping may be their only hope of survival,” says Hulse.

“B Natural engages their beekeeper suppliers to go the extra mile to defend and protect their colonies – never over sourcing and providing healthy environments, free of pesticides and other contaminants.”

15 Jun 2021 --- Throughout the global COVID-19 pandemic, NutritionInsight is dedicated to bringing its readers all the latest and most relevant industry updates. Visit this... Read More

14 Jun 2021 --- Nearly two-thirds of UK consumers have made dietary changes in the last year to improve their health, according to a new survey commissioned by The British... Read More