You are in : All News > Plant-based diet found to cut the risk of developing heart disease 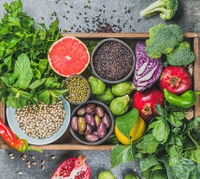 Heart failure – a chronic, progressive condition in which the heart muscle is unable to pump enough blood to maintain its workload – affects about 6.5 million adults over age 20 in the US, according to the American Heart Association.

“Our study looked at what people in the US tended to eat, which means that each participant received a score for each of the dietary patterns (which included animal protein),” Kyla Lara, M.D., first author of the study and an internal medicine resident at Icahn School of Medicine at Mount Sinai Hospital in New York, US, tells NutritionInsight. “Our findings showed that participants who mostly adhered to the plant-based dietary pattern had a decreased risk for heart failure.”

Heart risk decreases by 42 percent
The study looked at five different dietary patterns and, according to the author, found that people who ate a plant-based diet most of the time had a 42 percent decreased risk of developing heart failure over the four years of the study, compared with people who ate fewer plant-based foods. Other dietary patterns – described as convenience, sweets, Southern or alcohol/salads style – were not associated with a decreased risk for heart failure.

Previous studies had shown that what people eat can play an important role in increasing or decreasing the risk of atherosclerosis, the slow narrowing of the arteries that underlies heart attacks, most strokes and heart failure. This study focused specifically on whether diet can influence the development of heart failure among people with no diagnosed heart disease.

The researchers used data collected for the Reasons for Geographic and Racial Differences in Stroke (REGARDS), a nationwide observational study of risk factors for stroke in adults 45 years or older sponsored by the National Institutes of Health.

The participants, who were recruited from 2003 to 2007 and followed through 2013, included 15,569 patients without known coronary artery disease or heart failure. Incidents of heart failure within this group were confirmed by health care providers. Over the nearly 3,000 days of follow up, 300 instances of hospitalizations for incident heart failure were reported.

Participants in the REGARDS study reported their diets using a food frequency questionnaire, a standard method for classifying diets that uses statistical modeling to assign a person’s diet to one of five dietary patterns:

The researchers found that of the five dietary patterns, greater adherence to the plant-based diet had the strongest association with a decreased risk of incident heart failure when adjusted for age, sex and race of the participants and for other risk factors. No associations for the other four dietary patterns were found.

The study was observational, which means it can identify a trend or association, but cannot prove cause and effect, the American Heart Association notes. Lara adds that a useful follow-up study would involve determining the mechanism for the plant-based diet and its protective role in heart disease.

10 Feb 2020 --- Dairy that has been naturally modified to be lower in saturated fat can benefit blood cholesterol and heart health. This is according to a new study from the... Read More

04 Feb 2020 --- Eating two servings of red meat, processed meat or poultry – but not fish – per week is linked to a 3 to 7 percent higher risk of cardiovascular disease... Read More