You are in : All News > Phenols in cocoa bean shells could help fight obesity-related illness, study finds 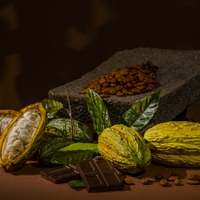 24 Jun 2019 --- Phenols found in the shells of cocoa beans have strong effects on the fat and immune cells in mice, a recent study by the University of Illinois, US, has shown. This may be used to reverse chronic inflammation and insulin resistance, which are issues associated with obesity. The extracted phenolic compounds could be added to foods to boost their nutritional value. In addition to the health benefits, this discovery may help mitigate the waste generated from 700,000 tons of shells discarded annually in chocolate production.

Damaged mitochondria in white fat cells (adipocytes) were repaired when the adipocytes were treated with one of the phenolic compounds, or with an aqueous extract containing all of the compounds. Additionally, less fat accumulated in the adipocytes, meaning inflammation was blocked and cells’ insulin sensitivity was restored.

“The objectives of the study were to test whether the bioactive compounds in the cocoa shells were efficacious against macrophages – the inflammatory cells – at eliminating or reducing the biomarkers of inflammation,” says de Mejia, also Director of Nutritional Sciences. “We wanted to see if the phenolics in the extract blocked or reduced the damage to fat cells’ mitochondria and prevented insulin resistance.”

Adipocytes which have accumulated too much fat promote the growth of macrophages, leading to an emission of toxins that inflame fat tissue. Eventually, chronic inflammation stops cells from being able to take up glucose, which leads to insulin resistance and potentially Type 2 diabetes.

Once the adipocytes were treated with the phenolics, they differentiated from white adipocytes into beige adipocytes, in a process called browning. Beige adipocytes have more mitochondria and an enhanced fat-burning efficiency as they are a specialized form of fat tissue.

“We observed that the extract was able to maintain the mitochondria and their function, modulating the inflammatory process and maintaining the adipocytes’ sensitivity to insulin,” Rebollo-Hernanz continues. “Assuming that these phenolics were the main actors in this extract, we can say that consuming them could prevent mitochondrial dysfunction in adipose tissue.”

This study potentially provides a use for cocoa bean shells, a waste byproduct which causes environmental contamination if not responsibly disposed of. By processing the shells to extract nutrients, the environmental toxicants can be minimized. Furthermore, they can provide cocoa producers with an extra revenue stream.

The cocoa industry is currently facing a range of issues, with efforts being made to make the sector more transparent. The usage of cocoa bean shells could make chocolate manufacture more environmentally friendly, as well as possibly increasing the wages of farmers. Cargill recently released a sustainability report in a move to increase traceability, tackle problems such as deforestation and raise farmers’ quality of life.

Another recent study, also involving de Mejia, developed a new hybrid of purple corn with phenolic compounds thought to likewise fight obesity, inflammation and diabetes. The pericarp, or outer layer of the corn kernels, was put under pressurized water to extract anthocyanins  – the nutritious, natural pigments in the pericarp. Once the anthocyanin-rich water was freeze-dried, analyses showed that the pericarp is rich in anthocyanins and phenolic compounds. De Meija cautioned, “It’s very important to note that it’s not just one or two compounds, but the combinations of phenolics working together that were responsible for the beneficial effects.”

Nutrition insecurity a “threat to public health” in US

Many US citizens have poor access to nutritious food, in turn impacting their health, according to a paper by the American College of Physicians (ACP). The research... Read More

Scientists have uncovered a new enzyme-inhibiting process that may present opportunities to improve the nutrition profile in potatoes. A new process may make potatoes... Read More