You are in : All News > Origins of gut-related diseases? “Overfed” bacteria turn against human hosts, researchers say 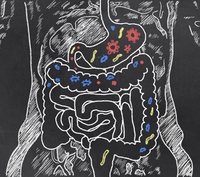 17 May 2019 --- An “unnatural and particularly comprehensive” nutrient supply in the human gut is responsible for the decoupling of bacteria from their host organism, thus upsetting the delicate balance of the microbiome and promoting disease development. This is according to a new study by the Collaborative Research Centre (CRC) 1182 at Kiel University, Germany, which examined similar symbiotic activity in ocean coral polyps. The researchers attribute an unhealthy gut microbiome to unbalanced, energy-rich and low-fiber diets.

The proposed “overfeeding” hypothesis offers valuable approaches for future clinical R&D: to date, scientists have been seeking ways to correct a disturbed microbiome through external interventions such as probiotics – the addition of certain types of helpful bacteria or even fecal transplants to restore the balance. An upset microbiome has been attributed to numerous illnesses, both physiological and psychological.

The researchers highlight the ability of the microbiome to re-adjust itself and restore a healthy composition through the moderation of nutrient levels. With this consideration, future research approaches lie in the specific mechanisms that balance the microbiome and the question of whether the “overfeeding” of the bacteria can be reduced by changed eating habits.

“An interesting question will be whether the original evolutionary processes which ensure the balance of the microbiome also have therapeutic potential,” says Tim Lachnit, Ph.D., Research Associate at the CRC 1182 and first author of the study. “In the future, we will, for example, not only consider the known health benefits of fasting but also its effects on the composition and function of the microbiome and thus on the development of inflammatory diseases.”

The Kiel scientists published this fundamentally new approach towards a more complete explanation of environmental diseases yesterday in the journal mBio.

Due to the oversupply of bacterial food attributed to human influences, bacteria living in corals were more predisposed to detach from their hosts. As such, they were found to no longer feed off the metabolic products of the host, but rather the richer nutrient supply of the surrounding waters. In this particular case, the balance of the coral microbiome is disrupted as a result of the exodus of its symbiotic partner, resulting in diseases.

“In this connection between nutrient availability and the balance of bacteria-host relationships, we see a universal principle which goes way beyond the very specific example of corals,” explains Dr. Lachnit. “In studies of our model organism, the freshwater polyp Hydra, we were able to experimentally confirm this connection. These small cnidarians also showed clear signs of disease as soon as their normal nutrient uptake was disturbed and an over-supply of food was available instead.”

Bacterial dysbiosis from environmental factors occurs in corals and humans
The researchers note that there is a high degree of probability that the knowledge gained in the ocean experiment is applicable to human health. Similar to the nutrient supply of the ocean environment, that of the human gut is also changing along with the civilization-induced changes in eating habits towards a “permanently high,” easy-to-process supply of nutrients.

In addition to direct negative health consequences, such a diet may not only impact human metabolism, but also the bacterial colonization of the intestine. The microbes switch from the metabolites of the host as their staple food to the abundantly available nutrients from the human food and thus decouple from their interactions with the host organism.

“This overfeeding of the bacteria promotes their growth as a whole and certain species of bacteria proliferate to the detriment of other members of the microbiome in an increased and uncontrolled manner,” stresses Professor Thomas Bosch, spokesperson of the CRC 1182.

“Along with the change in the composition of the bacterial colonization, the interactions between bacteria and host organism also change, and a serious maladaptation – known as dysbiosis – occurs,” explains Dr. Peter Deines, Research Associate at the CRC 1182.

NutritionInsight has reached out to the CRC 1182 for comment on future applications of these findings.

10 Aug 2020 --- With over half of Australia’s population experiencing gastrointestinal issues, healthcare professionals must have products that reflect the microbiome’s... Read More

31 Jul 2020 --- Prebiotics can stimulate the production of beneficial probiotics in the gut, which in turn contributes to overall health and immunity against viral infections. This... Read More

23 Jul 2020 --- Innovia Kids is a drinkable probiotic supplement for children older than four-years-old. Launched by Sofar Americas, the US subsidiary of Italy-based Sofar, the... Read More