You are in : All News > Nutrient breakthrough: Scientists show plants can be a dietary source of vitamin B12

Nutrient breakthrough: Scientists show plants can be a dietary source of vitamin B12 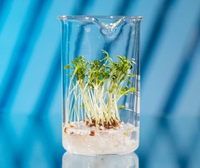 24 May 2018 --- Scientists at the University of Kent have made a significant discovery about how the vitamin B12 content of some plants can be improved to make vegetarian and vegan diets more complete. Vitamin B12 (known as cobalamin) is an essential dietary component but vegans and vegetarians are more prone to B12 deficiency as plants neither make nor require this nutrient.

A team, led by Professor Martin Warren at the University's School of Biosciences, has shown that common garden cress can take up cobalamin. The amount of B12 absorbed by garden cress is dependent on the amount present in the growth medium, and the researchers were able to confirm B12 uptake by showing that the nutrient ends up in the leaf.

Working with biology teachers and year 11 and 12 pupils at Sir Roger Manwood's School in Sandwich, the scientists investigated the detection and measurement of B12 in garden cress. The pupils grew garden cress containing increasing concentrations of vitamin B12. After seven days growth, the leaves from the seedlings were analyzed and found to have absorbed cobalamin from the growth medium.

To confirm this initial observation, the scientists made a type of vitamin B12 that emits fluorescent light when activated by a laser. This fluorescent B12 was fed to the plants and it was found to accumulate within a specialized part of the leaf cell called a vacuole, providing definitive evidence that some plants can absorb and transport cobalamin.

The discovery also has implications for combating some parasitic infections. Not only did the researchers demonstrate that some plants can absorb vitamin B12, but they were also able to use the same technique to follow the movement of fluorescent B12 molecules into worms. These results demonstrate that this is a powerful model to learn about how B12 is absorbed and, as worms must use a different absorption system to mammalian systems, there is the possibility of exploiting this difference to try and treat worm-based parasites such as hookworms.

The research is now published in the journal Cell Chemical Biology.

Speaking about the discovery’s potential use for the manufacturing of products such as supplements, Warren tells NutritionInsight: “Companies have marketed whole cell extracts of things like spirulina (a cyanobacterium) as being rich in B12. However, in this case, spirulina makes the wrong type of B12 and is of no nutritional value to humans. However, many macro and microalgae are a good source of B12 and could be used as supplements. Our plant technology needs more refinement in order to bolster the level of B12 in them.”

Warren notes that before large-scale cultivation is possible, optimization of the system is needed to find the conditions under which plants can absorb B12 from the soil with greater efficiency.

The observation that certain plants are able to absorb B12 is important as such nutrient-enriched plants could help overcome dietary limitations in countries such as India, which have a high proportion of vegetarians and may be significant as a way to address the global challenge of providing a nutrient-complete vegetarian diet, a valuable development as the world becomes increasingly meat-free due to population expansion and environmental concerns.

“We have been talking to Indian colleagues about using a hydroponics systems to improve B12 uptake – and then to test the B12-enriched plant material on patients who are B12 deficient. B12 deficiency and insufficiency is a major problem in India – and finding new ways to supply B12 to those who need it is something clinicians are very interested in,” he notes.

So what will be the researchers’ next steps? “We are looking at the global problem of B12 deficiency and insufficiency – and we are also speaking to several companies about developing systems to produce the vitamin in higher yields so that we can make the vitamin more generally available. Vitamin B12 is the most expensive of the water-soluble vitamins and hence we are looking at ways to reduce its production costs,” he concludes.