You are in : All News > NUS Food Scientists Create Diabetic-Friendly Bread from Black Rice 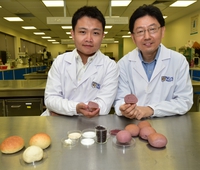 26 Feb 2016 --- A team of food scientists from the National University of Singapore (NUS) has successfully formulated a recipe for making healthier bread by adding a natural plant pigment, called anthocyanin, extracted from black rice.
This is the first study where anthocyanin extract has been fortified into a bread product, and the findings open up new possibilities of creating healthier, diabetic-friendly food products.

This new bread option gets digested at a slower rate due to addition of a natural plant pigment extract – hence improving blood glucose control – and is high in antioxidants, among other health benefits.

Bread is a popular staple food for many people around the world. Most bread contain a high amount of rapidly digestible starch, and hence many of them have a high glycemic index. Food high on the glycemic index are rapidly digested and absorbed into the bloodstream quickly, causing a sharp increase in blood sugar levels and making them unsuitable for diabetic patients.

In addition, rapid digestion of bread may result in people consuming more bread than required to make up the hungry feel. The excessive consumption of bread could increase the risk of overweight and obesity, and their associated diseases, such as Type II diabetes.

The anthocyanin-fortified bread created by NUS researchers could potentially bring health benefits to consumers looking for a healthier option to normal bread. The findings of the study were published in the journal Food Chemistry in October 2015.

Anthocyanins belong to the group of flavonoids that are naturally occurring pigments in fruits and vegetables, and are responsible for the orange, red, violet, and blue colors observed in nature. Fruits, such as blueberries, grapes, blackberries, as well as grains and vegetables like black rice and purple sweet potatoes, are naturally rich in anthocyanins.

Scientific studies have shown that anthocyanins are rich in antioxidant properties and may help prevent cardiovascular and neurological diseases, cancer, and inflammation. Anthocyanins are also known to play a role in controlling obesity and diabetes as they can inhibit digestive enzymes and hence reducing blood glucose levels.

Professor Zhou Weibiao, Director of the Food Science and Technology Program at the NUS Faculty of Science, said: “Despite their antioxidant capacity and associated health benefits, the knowledge of using anthocyanins as an ingredient in food products, particularly semi-solid products, is very limited. Hence, we wanted to explore the feasibility of fortifying anthocyanins into bread, to understand how it affects digestibility and its impact on the various quality attributes of bread.”

Currently, approaches for developing health-promoting bread are dominated by adding whole grains and fibers in bread, partly aiming to slow down its digestion among several health benefits. Dr Sui Xiaonan, a recent PhD graduate from the Food Science and Technology Program at NUS and first author of the study, said: “Reducing the digestion rate of the bread will lead to a lower glycemic index and slower absorption of the bread’s carbohydrates. This usually suggests a lower insulin demand, and could potentially improve long-term blood glucose control. Our study explores an alternative way of producing functional bread that delivers health benefits to consumers.”

Another area of interest for the team was to explore a way to incorporate anthocyanins into bread to improve its value as a health-promoting food. The team had previously conducted a study in 2014 to examine the degradation of anthocyanins during baking. They found that more than 80 percent of the antioxidant capacity was retained in the bread crust and crumb, even when baked at temperatures as high as 240 degrees Celsius for up to 12 minutes.

“Our results demonstrate that it is indeed feasible to create functional food products through anthocyanin fortification, using bread as an example. We hope to conduct further studies to incorporate anthocyanins into other food items, such as biscuits. Our team is also keen to explore opportunities to work with industry partners to introduce the anthocyanin-fortified bread to the market,” Professor Zhou said.

This week in industry news, UK-based infant formula producer Kendamil announced that it will continue distributing its infant formula brands in the US. Enwave revealed... Read More

Kerry has released a study assessing trends in the nutritional beverage market, revealing beauty is a top purchasing driver for consumers. An evaluation of over 10,000... Read More