You are in : All News > Jennewein Biotechnology flags HMOs’ potential in inhibiting infectious diseases

28 May 2020 --- Human milk oligosaccharides (HMOs) may inhibit the binding of noroviruses to human receptors, according to recent results from Jennewein Biotechnology’s norovirus research program. Published in the Journal of Biotechnology, the study found that certain HMOs and more complex oligosaccharides were more effective than those previously studied. Researchers note that these findings could pave the way for the use of HMOs as a potential inhibitor against infectious diseases, such as the norovirus, for which there is no vaccine.

“Today, HMOs are mainly included in infant formula and specific medical nutrition products due to their prebiotic effect in helping to develop or restore a healthy gut microbiome. The ability of various oligosaccharides to potentially prevent infectious diseases could open the application of these products also for the general community,” Dr. Katja Parschat, Deputy Head F&E at Jennewein Biotechnology and a researcher on the study, tells NutritionInsight.

“With more than 600 million infections and 200,000 deaths per year and no treatment or vaccine available, norovirus is definitely a global health problem, and a particular threat to infants, small children and the elderly,” states Dr. Stefan Jennewein, CEO of Jennewein Biotechnology.

Dr. Parschat notes that in previous work, HMOs, namely 2′-fucosyllactose (2′-FL) and 3-fucosyllactose (3-FL), were found to mimic the structure of the virus’ natural receptor on human cells, coating the virus and preventing it from interacting with its targets.

“We demonstrated this ability for 2′-FL and 3-FL in our previous study. But to see that these complex oligosaccharides inhibit norovirus’ binding to its natural receptors more efficiently than smaller HMOs, such as 2’-fucosyllactose, is really promising in regard to its usage as a preventive agent,” says Dr. Parschat. 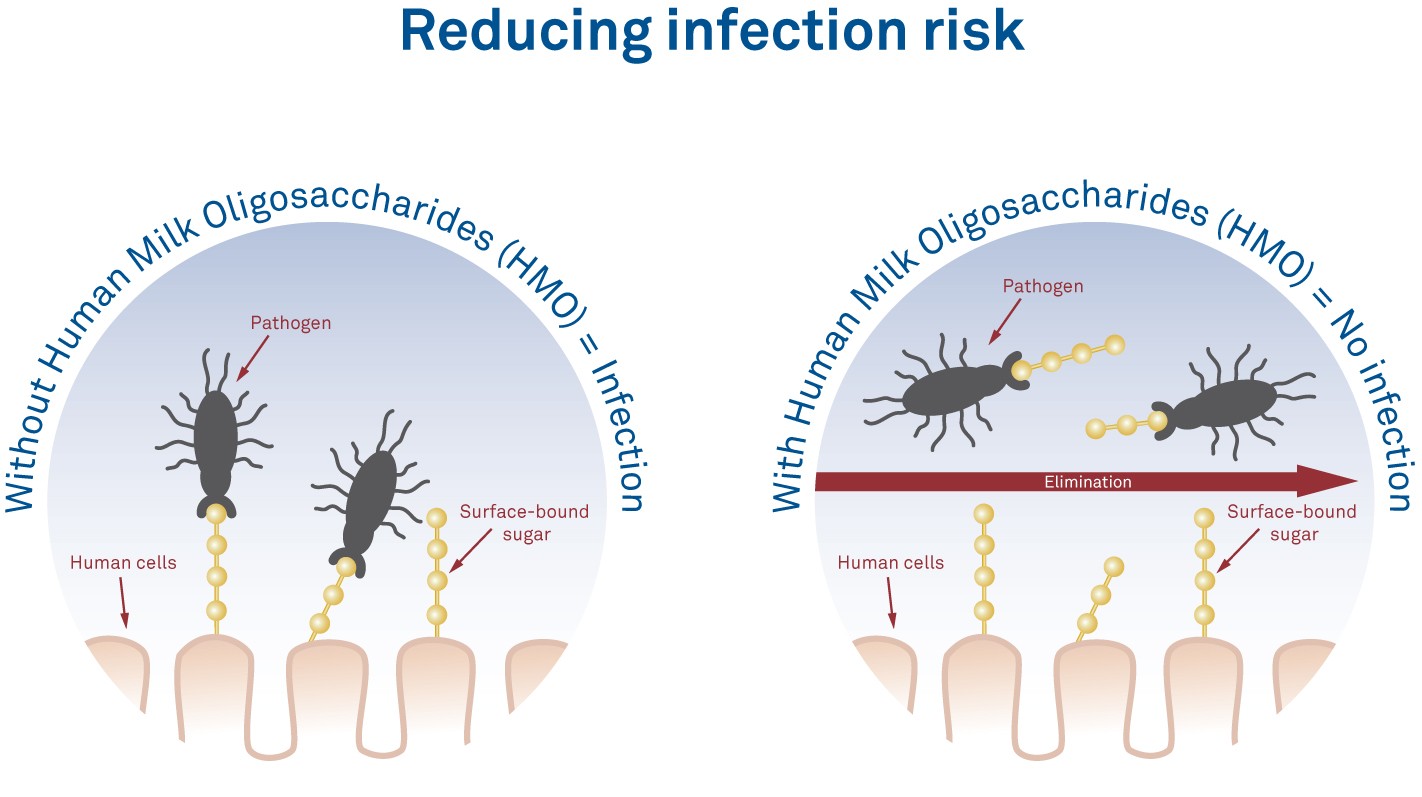 Pathogens are depicted binding to HMOs, rather than to human receptors.HMOs are complex sugar molecules that are naturally found in breast milk. Excluding water, they are the third most abundant constituent of human milk after fats and lactose. More than 200 structurally distinct HMOs have been identified in previous studies. HMOs, and 2′-FL in particular, have a positive impact on infant development by promoting the growth of beneficial microorganisms and inhibiting the growth of pathogens, directly and indirectly preventing colonization, according to Jennewien Biotechnology.

The link between HMOs and infection prevention has been observed through a lower likelihood of breast-fed infants to contract norovirus infections than bottle-fed infants, according to the company. This builds upon a growing body of studies that show a host of benefits attributed to the ingredient, mainly related to gastrointestinal health.

Possibilities for COVID-19?
While the latest studies have been focused on the norovirus, Dr. Parschat cannot rule out a potential link between HMOs and COVID-19. “Research to investigate potential interactions of the current pandemic virus and specific oligosaccharides will be of great interest,” she explains.

“Coronaviruses often recognize cell standing glycan structures on human cells as receptors to open the gateway for the infection, such it is known for noroviruses. The receptor for SARS-CoV-2 is identified as a membrane standing protein. However, a connection between the virus to glycans expressed on the cell surfaces can not be excluded,” she adds.

HMOs have already been cited for their immunity-boosting potential in all age demographics. Jennewein Biotechnology notes that not only do they support the development of healthy intestinal flora in infants and strengthen their immune system, but they also have an anti-adhesive effect in infants and adults. This means they can prevent the penetration of pathogens into body cells, the company explains.

“HMOs resemble the sugar structures on epithelial cells, which are receptors for pathogens. This similarity leads to the pathogens binding to the soluble HMOs and not to their receptors. The pathogen can therefore be excreted from the intestine. That means that HMOs can ward off diseases and strengthen the immune system," explains Dr. Parschat.

HMOs are being studied for their potential to inhibit infectious diseases.Research by Jennewein Biotechnology has also found that 2‘-FL and other HMOs also bind to bacterial pathogens such as Streptococcus pneumoniae, which can cause lung inflammation, or Pseudomanas aeruginosa, usually the cause of meningitis. This binding can thus reduce the risk of infection.

Furthermore, the company maintains that in vitro studies have also shown that HMOs can have an influence on the formation of inflammatory markers or the differentiation of immune cells.

BASF Human Nutrition also found that 2’-FL’s molecular structure renders it able to act as a decoy receptor for pathogens in a study on inhibiting gastrointestinal infections caused by Campylobacter jejuni.

Looking forward
Jennewein Biotechnology plans to continue its studies in the future to gain deeper insight into how biotechnologically produced oligosaccharides can impact the burden of bacterial and viral infections, says Dr. Parschat.

This builds on the company’s decade-long work on studying HMOs for the inhibition of infectious diseases. While the body of evidence continues to grow in favor of HMOs, opportunities in the field of food supplements, nutrition and functional foods expand.

Other companies are making significant strides in the HMO sector. Earlier this year, DSM agreed to acquire Glycom, a major supplier of HMOs for an enterprise value of €765 million (US$826 million). This is to “accelerate growth and provide customers with innovative solutions” for DSM’s Human Nutrition Business,” a DSM spokesperson previously told NutritionInsight.

Keeping an eye on contaminants: How to thwart suppliers of adulterated botanicals that deceive common testing methods