You are in : All News > Gut-brain-axis: Intestinal and cognitive health physically linked, mounting research indicates

Researchers are still figuring out the role of the microbiome-GBA, while consumers are crying out for more solid information

15 Oct 2019 --- The term “gut feeling” may have relevance as a physiological function. Scientists are becoming increasingly aware of how our bellies and brains are physically and biochemistrally linked, through the so-called gut-brain-axis (GBA). NutritionInsight speaks to leading researchers in this space to discover how overall health is not only dependent on nourishing ourselves, but also on sustaining the microbiome inside of us.

“The brain, intestines and microflora are organs on their own and each have attracted their own field of research. The challenge with new clinical research on the GBA is the need for a multidisciplinary approach, from microbiology to gastroenterology and neuroscience,” says Lucie Lingrand, Product Manager for Psychobiotics and Probiotics for the GBA at Lallemand.

Research has found that neurotransmitter receptors in gut bacteria allow these microorganisms to communicate directly with the human brain via neural pathways, such as the vagus nerve. The majority of neurotransmitters, such as serotonin, are produced in the gut. Ninety percent of serotonin, nature’s antidepressant, is produced in our intestines, with only 10 percent of the neurotransmitter being synthesized in the brain. This demonstrates how these types of bacteria may hold significant influence control over the way people think and behave.

Intestines are physically linked to the brain via the vagus nerve, which bilaterally sends signals to and from the brain and gut. As microbiomes are the centerpoint of the immune system, a disturbance in the gut can cause subtle immune reactions all around the body. This explains the instinctual feeling people often refer to as “gut feeling”, but also includes the commonly observed conditions of experiencing nervousness, which often leads to the sudden need to defecate, as well as stress and anxiety leading to hunger and nausea and vice versa. It could also explain why stomach pains may occur in upsetting or suspicious situations. Like a double-edged sword, moods and gut bacteria reciprocally influence each other. 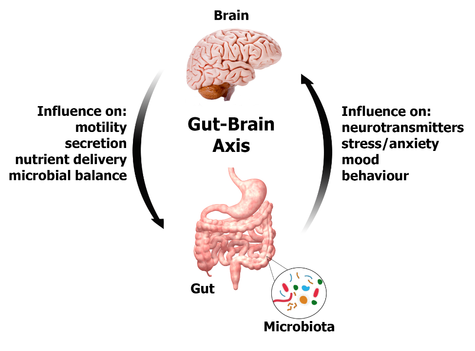 There is increasing scientific evidence indicating a bilateral relationship between the brain and the gut.Forgotten research?
A healthy gut ensures effective absorption of nutrients and digestive comfort, affects moods and contributes to general wellbeing. The GBA and the microbiome have only recently acquired an important position in explaining a wide range of human behaviors and emotions.

Over the past decade, scientists and medical professionals are taking a multidisciplinary approach to unravel more about the bidirectional communication system between the gut and the brain, with a focus on the gut microbiome. “Research within this field has been exploding and we are learning something new every day. It is so exciting to be working within this new field on the brink of scientific discovery,” says Dr. Elaine Patterson, Senior Scientist, DuPont Nutrition & Biosciences.

“While it is known that there are links between gut inflammatory conditions, the balance of the gut microflora, and depression and other mood disorders, it is less clear why and what order these conditions happen in, or what is driving what,” says Dr. Neill Haggarty, Senior Research Scientist, Fonterra Research and Development.

Moreover, Lingrand explains that the theory that gastrointestinal health can impact the brain, and vice versa, has only recently been confirmed with the advancement of analytical techniques and animal models.

Current challenges in GBA research
The main challenge for the field is the lack of detailed understanding of the underlying mechanisms of the GBA, says Maja Orešnik, Science & Research Director at PharmaLinea. Research is progressing and certain studies are beginning to untangle the exact biochemical and neurological pathways in mice. Nevertheless, human studies are naturally lagging behind, she explains. Current scientific knowledge is far from being able to support nutraceutical recommendations for a specific cognitive issue in a specific individual.

The current knowledge about the relationship between the brain and the gut mainly relies on the results of in vitro studies and animal models, explains Dr. Stefan Rüdenauer, Director Research & Development and Scientific Marketing Human Nutrition at BASF. “It still needs to be explored to what extent the conclusions from these experiments are relevant for human health. For now, it is hard to say which kind of new product development will result from these studies. Various industries will be involved in developing customized solutions which could reach from food to food supplements, live bacteria and drugs as well as fecal transplantation.

“The biggest challenge is likely to be getting enough evidence to support claims as the area of brain function is difficult to study. There also needs to be plausible explanations about how the BGA works, supported by studies on the mechanisms involved,” Dr. Haggarty. Ingredients that influence on the gut, gut microflora and gut function include probiotics, prebiotic galacto-oligosaccharides, hydrolysates, milk fat globule membrane ingredients and human milk oligosaccharides (HMOs), he adds.

The vagus nerve sends messages to and from the brain and gut.“Currently, the marketing hype surrounding the GBA does not reflect the science backing it. Consumers cannot possibly have a clear picture of the matter since even the leading experts do not. The task of educating the public is indeed one waiting in the future, yet only reasonable to attempt once sufficient understanding is achieved by the scientific community,” affirms Orešnik.

Consumer understanding of a specific steering function of the gut on the brain is still in its infancy although consumer awareness of gut health topics is on the rise due to global media presence, Dr. Rüdenauer echoes.

Despite research being in its initial stage, other experts are convinced that consumers have a substantial understanding of the benefits of digestive health. Dr. Haggarty insists that while there inevitably will be a need for consumer education, there is already a good awareness and interest in gut health and brain function.

At Lallemand, Lingrand determines that consumers must be educated in the right direction because of ubiquitous access to information online. “[Consumers] do not understand but they hear about it and conduct research by themselves online. As a result of this research, health conscious consumers are sometimes better informed than prescribers. However, not all the information available on the internet is true. Therefore, it is important to be able to provide consumers with reliable sources of information,” Lingrand adds.

While Dr. Patterson agrees that there is still much to learn about the GBA, she believes consumers actually do have a good knowledge of this field. “In fact, I think consumers are crying out for the answers from research and development – they are jumping ahead. We need to have a little patience here, as we are still figuring out the role of the microbiome-GBA. We don’t have all the answers yet. I would also encourage consumers to do their own research into the clinical trials which have been published in this field. There they will see the evidence for the microbiome GBA for themselves,” she states.

Impacting the food industry
For the food industry, a broadened understanding of the GBA is a huge opportunity for NPD and product redesign. Besides supplementing probiotics, there will be a need for tailor-made, specific prebiotics, Dr. Rüdenauer predicts. “HMOs are one potential approach to answer this demand. Recent studies have shown that 2’-Fucosyllactose, the most prevalent HMO in most mothers, selectively stimulates the beneficial microbiota and interacts with the enteric nervous system.”

Orešnik warns how enormous the backlash can be for both food and pharmaceutical brands should they not approach this area with caution. “Working with partners from the more demanding industries, we see that the area is still some years from credible nutraceutical applications,” she states.

Nevertheless, Dr. Haggarty maintains that the food industry has always believed that what people eat impacts the gut first and foremost. He envisions the food industry to have a keen interest in the ongoing GBA research, and that this can be translated into opportunities for premium and value added solutions.

The gut is increasingly being referred to as "the second brain". Future potential
As the science evolves, we accumulate a better understanding what happens when the gut and the brain communicate with each other, Dr. Haggarty highlights. “There is a growing understanding of the various pathways and neural networks that connect the gut and the brain as well as the impact of these pathways on our health. We expect to see more research demonstrating the benefits across different life-stages for different ingredients and ingredient combinations.”

Dr. Rüdenauer is especially keen on the potential the GBA field holds, given how the number of publications – both in expert and popular scientific journals – have exploded during the last years. He states how this has raised a lot of hope to use the GBA as an avenue to address many mental health conditions, such as depression, multiple sclerosis, Parkinson’s disease and more. New available technologies like metagenomics will be important to prove cause-effect relationships and lead the way to effective interventions, thus representing a huge market potential.

The GBA is a particularly exciting field of research precisely because so little is known about it. This does not intimidate researchers; on the contrary, it exhilarates them. “The quality of GBA-related clinical trials is improving and we are now starting to understand the role of the microbiome-GBA in various disease states as well as ways to modify the gut microbiome to improve health. In the future I expect to see gut-based solutions to improve mental health. Watch this space!” Dr. Patterson declares.