You are in : All News > Front-of-pack labels: Nutri-Score best-understood system, says study

09 Aug 2019 --- Nutri-Score is the most effective style of front-of-pack label (FoPL) for helping consumers rank products according to their nutritional quality, according to a new study published in Nutrients. However, there were only marginal differences in how favorably the various FoPLs were perceived by consumers, with there being no significant difference observed for how FoPLs influenced food choices. This study examined Dutch participants, but the researchers are currently collecting and analyzing further data from across the EU.

“These results are particularly important given that the Dutch government is currently discussing the implementation of a new FoPL,” Manon Egnell of the Nutritional Epidemiology Research Team at Sorbonne Paris Cité Epidemiology and Statistics Research Center and lead author of the study, tells NutritionInsight.

“Our findings show that consumers’ perceptions of the labels did not differ between labels, given that they are globally well-perceived by consumers. Shoppers want transparency on nutritional quality and are receptive to tools which can help them identify the healthiness of foods,” Egnell continues.

Nutri-Score was the easiest FoPL to understand out of five varieties. (Credit: Nutrients)The study compared 1032 Dutch participants’ perceptions of the Health Star Rating (HSR) system, Multiple Traffic Lights (MTL), Nutri-Score, Reference Intakes (RIs) and Warning symbols. Participants were told to select one product from a set of three foods with different nutritional profiles, and then rank the products within the sets according to their nutritional quality. For one cohort, the foods had no visible label, while the other cohort could see one of the five FoPLs. Afterward, participants were questioned on their perceptions regarding the label they were exposed to.

Previous research had suggested that the effectiveness of a front-of-pack nutrition label can vary among different socio-cultural contexts, Egnell notes. “However, in the FOP-ICE study, on which the methodology of the present study was based, we observed similar results regarding the performances of the different labels on food choices and objective understanding in 12 countries: Argentina, Australia, Bulgaria, Canada, Denmark, France, Germany, Mexico, Spain, Singapore, United Kingdom and the USA.”

“We, therefore, hypothesized that although some variation may be expected concerning consumer response to some FOPLs, the overall performance of the designs would be aligned with our previous findings, which used the same methodology,” she explains.

Even though the study revealed that all labels were well-perceived, they were not equally understood. Nutri-Score, which Nestlé has recently greenlighted to roll out through Europe, was the label best-understood and which most helped consumers identify the nutritional quality of products. This element of label-understanding is a key aspect of how consumers actually use labels at the point-of-purchase.

“Our findings provide information on the relative contribution of different dimensions (perception, understanding, choices) to measure the effectiveness of various labels. Studies on the understanding of labels and their effect on food choices are essential to understanding the efficacy of various schemes before a government chooses the most relevant label within a specific population. Additionally, these studies should use conditions similar to real-life, measuring purchases or purchasing intentions instead of choice tasks,” Egnell continues.

Current issues in labeling
The international interest regarding nutritional labeling inspired this investigation, Egnell says. “Several institutions, including the World Health Organization, have highlighted how FoPL can be used as an effective measure to encourage healthier food choices in the population. In the EU, a report from the European Commission on the topic is expected to be released soon.” 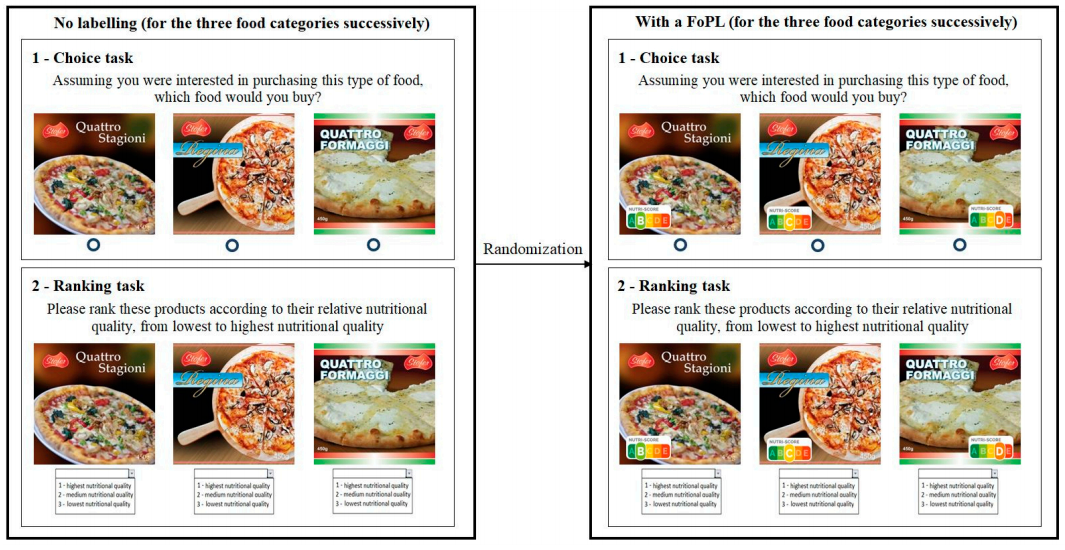 Some participants ranked foods without labels, while others could see a FoPL. (Credit: Nutrients)

She adds that in the Netherlands, the government decided to withdraw the Choice logo, which had been affixed to the front-of-pack in Dutch supermarkets for several years. It is now discussing implementing a new front-of-pack label. However, to the researchers’ knowledge, no study has previously investigated the effectiveness of different types of labels in the Netherlands specifically.

FoPLs are regulated by the EU, which stipulates the conditions in which the label can be implemented and developed. However, as FoPLs are voluntary according to the regulation, government action in this area is limited.

Additionally, many FoPLs, including Reference Intakes and the Multiple Traffic Lights are based on portions determined by the food manufacturer, instead of by a standard 100g or 100ml. Although these serving sizes are theoretically based on a reasonable amount that would be eaten by consumers at one time, they are not regulated.

“It has been shown that the presentation of nutritional information per portion of food influences the perception of consumers with regards to the nutritional quality. This is especially true for unhealthy foods. They are often perceived as being of healthier nutritional quality when the label is based on the serving size instead of per 100g,” Egnell concludes.

Shoppers are generally dissatisfied with the information they are receiving about their groceries, with a recent survey finding that less than 30 percent of UK and US shoppers believe that grocery retailers are doing enough to help promote healthy eating. Additionally, shoppers have trouble differentiating between health and nutrition claims.

The World Health Organization (WHO) has released a report on nutrient profiling – the science of ranking and classifying foods according to nutritional contents... Read More