You are in : All News > Fries back on the menu? Parallel studies tout benefits of potatoes on weight and insulin response 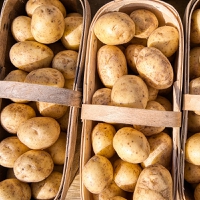 21 Nov 2022 --- Rich in fiber and nutrients, potatoes are often singled out as a food to limit. However, experts in two separate studies are revealing that the oft-fried food can not only be a part of a healthy diet, but also help decrease body mass index (BMI) – a major factor in the development of Type 2 diabetes – and may improve insulin sensitivity.

Dr. Lynn L. Moore, the lead investigator for the study on cardiometabolic risk published in the Journal of Nutritional Science and professor at the Boston University Chobanian & Avedisian School of Medicine in Boston, Massachusetts, US, says that despite the common recommendations, potatoes do not increase the risk of cardiometabolic disease.

“We looked at the effects of higher intakes of potatoes on blood pressure, lipids, and glucose, and found that after accounting for other dietary and lifestyle factors, there was no increased risk of cardiometabolic disorders associated with potato consumption,” she says.

One study found no association between eating potatoes and cardiometabolic disease, even when fried.Additionally, Dr. Candida Rebello, co-investigator of the study published in the Journal of Medicinal Food and assistant professor at Pennington Biomedical Research Center in Baton Rouge, Louisiana, US, says the effects of “feeling full” may be one of the key factors in how potatoes affect BMI.

“People tend to eat the same weight of food regardless of calorie content in order to feel full,” says Rebello. “The key aspect of our study is that we did not reduce the portion size of meals but lowered their caloric content by including potatoes.”

Effortless weight loss
Rebello’s study included 36 participants between the ages of 18 to 60 that were either obese, overweight, had insulin resistance or some mixture of the three. They were given controlled diets for eight weeks that substituted about 40% of the typical meat consumption with either beans or potatoes. The meals were also high in fruits and vegetables.

The results showed that, even though blood glucose levels were only nominally affected, insulin resistance was significantly decreased. Moreover, BMI decreased almost 6% from baseline with potatoes compared to less than 4% with beans. Beans are often considered preferable to potatoes, but the study shows people may achieve better outcomes with potatoes.

“We demonstrated that contrary to common belief, potatoes do not negatively impact blood glucose levels. In fact, the individuals who participated in our study lost weight,” Rebello explains. “Each participant’s meal was tailored to their personalized caloric needs, yet by replacing some meat content with potato, participants found themselves fuller quicker, and often did not even finish their meal.”

“In effect, you can lose weight with little effort.”

With a side of fries
Furthermore, Moore’s study shows that a diet high in potato content has no negative effects on the cardiometabolic system either, even if the potatoes were fried.Researchers at the Pennington Biomedical Research Center state that eating potatoes can lower insulin resistance.

The researchers found no association between eating four or more cup equivalent portions of potatoes with Type 2 diabetes or hypertension after evaluating case studies from the Framingham Offspring cohort – a second-generation study that monitored and recorded the health of the children of 5,209 participants.

“We know that potatoes are rich in potassium, magnesium, and dietary fiber, all of which may be protective against the heart attacks and strokes that are a consequence of elevated levels of cardiometabolic risk,” Moore explains. “These findings underscore the importance of overall diet and lifestyle when it comes to cardiometabolic disease risk.”

“Public health messaging singling out potatoes, and even fried potatoes, is not supported by this evidence,” she adds.

Meanwhile, Rebello holds that there is an added importance to these studies’ findings.

“People typically do not stick with a diet they don’t like or isn’t varied enough,” she underscores. “The meal plans provided a variety of dishes, and we showed that a healthy eating plan can have varied options for individuals striving to eat healthily. In addition, potatoes are a fairly inexpensive vegetable to incorporate into a diet.”

A sedentary lifestyle and excessive sugar intake have more adverse effects on men than women, according to a new study. Men also experienced a decline in a protein... Read More