You are in : All News > Energy boost: Are adaptogens a better alternative to caffeine? Experts weigh in

Energy boost: Are adaptogens a better alternative to caffeine? Experts weigh in

20 Feb 2019 --- A daily cup of coffee is not just a habit for the approximately 2.25 billion people around the globe that drink it every day, but rather a beverage that boosts energy and increases alertness with the added bonus of a delicious taste. Despite perceived benefits, however, caffeine also has its drawbacks and this has allowed a number of alternative energy-boosting ingredients to come forward. NutritionInsight speaks to industry experts to find out more on caffeine alternatives that are seeing a boom in popularity.

Caffeine crash
Caffeine is largely consumed because of its stimulating effect, providing energy and focus over a determined period, Annette Badenhorst, Director of Sales & Marketing at Nektium, tells NutritionInsight. “However, one drawback of this ingredient has always been the negative side effects that come along with the consumption of caffeine, especially when using it excessively.”

Another side effect is the high absorption rate. Caffeine is rapidly absorbed and consequently causes energy levels to spike quickly, which are then typically followed by an energy crash.

“The Diagnostic and Statistical Manual of Mental Disorders refers to a potential caffeine intoxication with as little as 250mg, leading to typical side effects such as restlessness, nervousness, excitement and insomnia, just to mention a few,” says Badenhorst.

Many sports performance supplements already exceed these amounts in a single serving (between 200-400mg) causing possible health risks for customers, she warns.

This has led to some governments taking action against the so-called “abusive use” of caffeine – such as the US FDA in April 2018 on highly concentrated caffeine in dietary supplements.

These drawbacks are exactly what make caffeine alternatives an interesting space for innovators.

One area of discussion and exploration is the source of caffeine. “There are lots of botanicals that have a stimulating effect that is linked to their caffeine content without being popular for it, such as guarana, ginkgo or mate,” Badenhorst says.

However, she mentions that there are ingredients that are directly positioned as caffeine replacements, with active compounds working on similar pathways as caffeine – adding to their energizing effects. A main differentiating factor is whether or not the ingredient is natural or synthetic.

Nowadays, the vast majority of caffeinated supplements contain synthetic caffeine which is related to cost efficiency compared to the natural version of the ingredient. Badenhorst mentions Nektium’s Zynamite ingredient, an all-natural standardized extract of mango leaves that demonstrates a very similar effect to caffeine as a mental and physical enhancer, without the side effects commonly associated with caffeine. 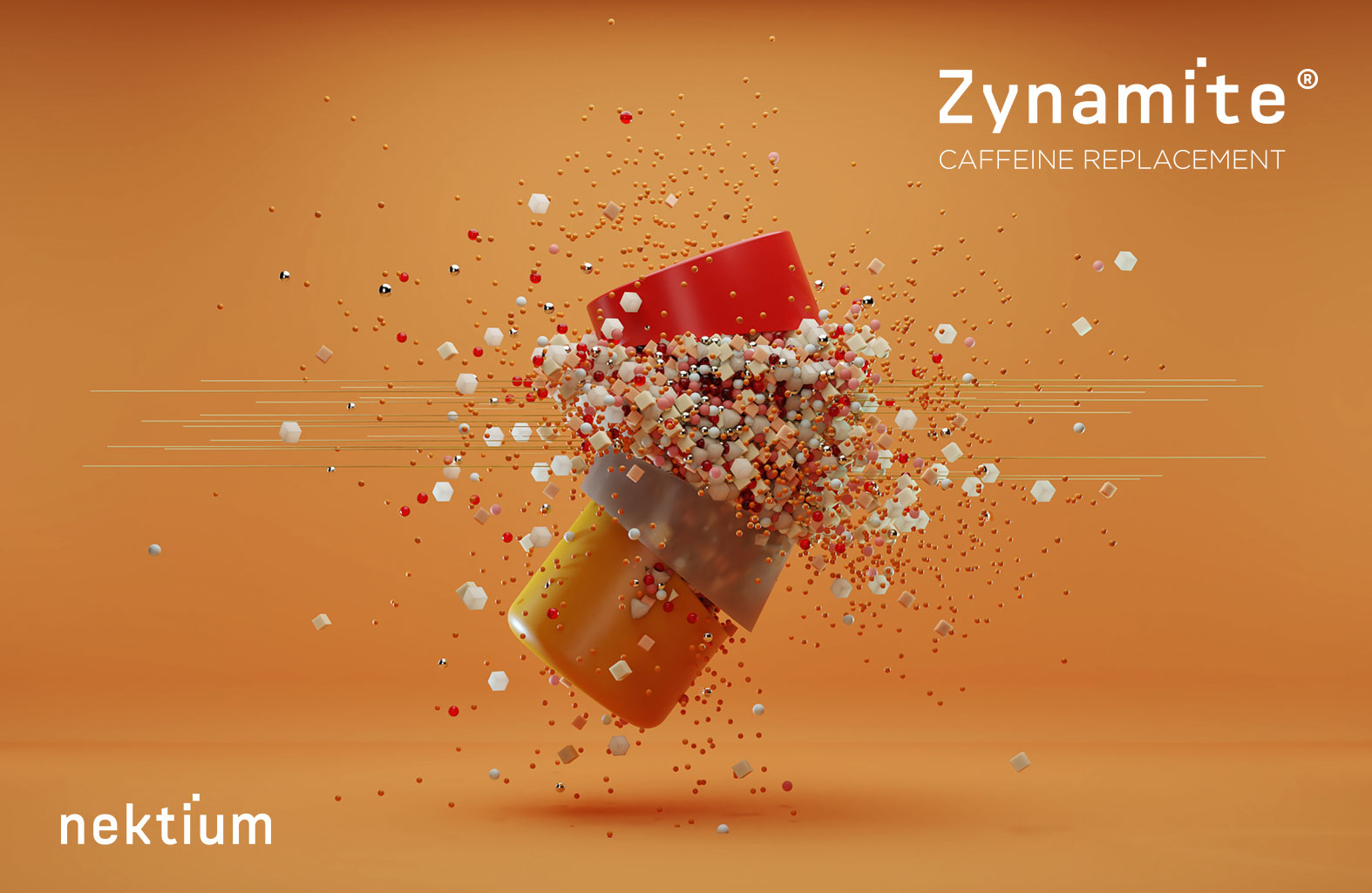 The rise of adaptogens
Clean label, natural products with added health benefits are in vogue, and busy lifestyles are putting a spotlight on foods and beverages that can offer some stress relief and mood balancing effects. It’s no wonder then that adaptogens – claimed to stabilize physiological processes and promote homeostasis – are having a moment.

Adaptogens are plants with effects on the development of physical abilities and recovery. Adaptogens are also touted as boosting athletic performance and regulating physical and mental stress. Some of the most popular adaptogens are ginseng root and cordyceps, historically used in traditional Chinese medicine, according to Negra.

“We often hear about caffeine substitutes including botanicals such as mate and guarana which are also good sources of caffeine. However, when talking about caffeine and its energy boosting effect, we must also consider adaptogens such as ginseng, schisandra, rhodiola and cordyceps,” she says.

Each of these ingredients has its own unique effect on the body and do not necessarily mimic the effect of caffeine. Mostly, people ingest caffeine for energy boosting purposes but we should also bear in mind the importance of correct hydration and detoxification in this scenario, Negra notes.

“We can boost energy with the caffeine and the adaptogenic ingredients, but it is fundamental to have good levels of nutrients such as vitamin C, vitamin B, calcium, iron and magnesium as well,” she stresses.

There is a strong link between adaptogens and caffeine as both can be applied to products oriented towards mental and physical energy, Badenhorst notes. “However, the potential for adaptogens is greater as they work non-specifically on the body and create a state of adaptation and resistance in the body to physical, emotional and environmental stress.”

“In contrast to caffeine, adaptogens have only recently received increased attention. This is something that we have experienced first-hand with our Rhodiolife ingredient, which is a standardized botanical extract of rhodiola rosea, one of the few officially recognized adaptogens,” she explains.

Adaptogens have long been shown to have stimulating effects, both after single and multiple administration, in increasing mental performance and working capacity without the negative side effect of drug withdrawal syndrome.

According to Negra, adaptogens may be good alternatives to reduce caffeine intake. Ginseng could be a good option for consumers wanting to reduce caffeine because it helps fight stress and is good for improving concentration and memory.

Despite this, Negra warns that even in the case of adaptogens, there could be potential side effects. “For instance, ginseng may cause insomnia and it is not recommended for children or pregnant women, as it is considered unsafe after oral intake of longer than six months because there are not enough studies about the side effects.”

“Similar effects are reported with cordyceps. In this case, it is considered safe for most people to consume it orally in the short-term, although there is not enough reliable information about its effects on pregnant and breastfeeding women,” she adds.

In general, she urges that more studies are needed on supplementation with adaptogens. Trial studies, she says, can help analyze their real possibilities to improve physical and mental performance.

With the retail value of the US coffee market estimated at US$48 billion, according to the National Coffee Association (NCA), it remains to be seen whether these alternative options will prove indeed a worthy opponent to the staple energy-boosting beverage. Further research and development is warranted to determine their potential.

US-based Conagen has announced commercial production of its 99% high-purity salidroside, made via bioconversion technology. Salidroside is an active ingredient from the... Read More

US-based Frangiosa Farms is unveiling its hemp honey mushroom complex, harnessing both adaptogens and antioxidants in a bid to boost nutrient absorption. The... Read More