You are in : All News > Eating regular variety of nuts associated with lower risk of heart disease 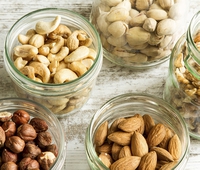 14 Nov 2017 --- People who regularly eat nuts, including peanuts, walnuts and tree nuts, have a lower risk of developing cardiovascular disease or coronary heart disease compared to people who never or almost never eat nuts. This is according to a study published in the Journal of the American College of Cardiology, said to be the largest to date looking at frequency of nut consumption in relation to the incidence of cardiovascular disease.

Recently, dietary recommendations have shifted toward diets including higher quantities of plant-based foods over animal-based foods, the American College of Cardiology notes, with most dietary patterns including nuts because of their association with reduced cardiovascular risk factors and unique nutritional composition.

“Nuts are a good source of healthy fats including mono- and poly- unsaturated fatty acids as well as rich in plant-based protein, minerals, vitamins and fiber,” Marta Guasch-Ferre Ph.D., lead author of the study and research fellow at the department of nutrition at Harvard T.H. Chan School of Public Health, tells NutritionInsight. “Thus, they can be a key food to be included as part of healthy diets high in plant-based food and help to substitute animal foods such as red meat providing a nutritious and delicious food.”

Specificity key to nut study
While many past studies focused on nut consumption as a whole, researchers in this study also looked at the association between specific types of nuts – peanut butter, peanuts, walnuts and tree nuts – with major cardiovascular events. Peanuts were included, even though they are actually a legume. This was because they have a similar fatty acid and nutrient profile to other nuts.

The study looked at over 210,000 people, including women from the Nurses’ Health Study and Nurses’ Health Study II and men from the Health Professionals Follow-up Study, with up to 32 years of follow up. In all three groups, information about medical history, lifestyle and health conditions were collected via self-administered questionnaires every two years.

The study found a consistent inverse association between total nut consumption and total cardiovascular disease and coronary heart disease. Also, after looking at individual nut consumption, eating walnuts one or more times per week was associated with a 19 percent lower risk of cardiovascular disease and 21 percent lower risk of coronary heart disease.

“Our findings support recommendations of increasing the intake of a variety of nuts, as part of healthy dietary patterns, to reduce the risk of chronic disease in the general populations,” says Guasch-Ferre.

Several limitations were noted in the study, including the fact that because the nut intake was self-reported, errors were inevitable. There were no data on how the nuts were prepared, so the influence of preparation methods was not able to be tested.

The sample size was also limited to white health professionals. However, the researchers note that the results can be generalized to men and women of different ethnicities because there is no reason to expect the underlying mechanisms to be different.

“Several lines of research can be pursued after this work including a more in-depth investigation of the mechanisms underlying the associations between nuts and cardiovascular disease with novel omic techniques such as genomics, metabolomics and proteomics,” Guasch-Ferre tells NutritionInsight. “Second, to further investigate the differences among preparation of nuts and further elucidate the effect of peanut butter on health outcomes.”

In an accompanying editorial comment, Emilio Ros, M.D., Ph.D. confirms that the consistency of the findings strongly suggests an association between nut consumption and heart disease protection, but there is more to research.

“Ideally, further investigations should test the effects of long-term consumption of nuts supplemented into the usual diet on hard cardiometabolic events,” Ros says. “In the meantime, raw nuts, if possible unpeeled and otherwise unprocessed, may be considered as natural health capsules that can be easily incorporated into any heart-protective diet to further cardiovascular well-being and promote healthy aging.”

Mediterranean diets are better for the heart than low-fat diets, say researchers

04 Dec 2020 --- Eating plant-based foods, eggs and dairy instead of red meat can slash  coronary heart disease (CHD), according to a Harvard University study of 43,000 US... Read More

Nuts for nuts? Studies point to benefits for heart, sperm and stress

10 Nov 2020 --- Nuts are in the spotlight thanks to their nutrition benefits for areas ranging from heart health to sperm function and mental stress relief. A host of recent... Read More

22 Sep 2020 --- EPA and DHA omega 3 intake has been linked to a reduced risk of coronary heart disease (CHD) events, according to new research funded by the Global Association for... Read More

20 Aug 2020 --- Consumers seeking out the health benefits of dark chocolate while maintaining the sweetness and softness of milk varieties may one day be able to access just that.... Read More