You are in : All News > Connection between selenium and COVID-19 outcomes revealed in China analysis

Connection between selenium and COVID-19 outcomes revealed in China analysis

06 May 2020 --- A correlation has been found between low selenium levels and COVID-19 death rates in China. This was revealed in a population-based, retrospective analysis published in The American Journal of Clinical Nutrition, which details how meager levels of the antioxidant in regions of China line up with worse COVID-19 outcomes. This comes as immunity continues to be a topic of great focus within industry, with players reporting boosts to sales.

“We have recorded an increased demand for selenium products. It is a trace element that supports the maintenance of the immune system, as documented in an approved European Food Safety Authority (EFSA) health claim. A strong immune system can help to reduce the duration of infectious diseases,” Dr. Sonja John, Product and Area Sales Manager Business Unit Food and Animal Nutrition at Dr. Paul Lohmann, tells NutritionInsight.

Study author Dr. Margaret Rayman, Professor of Nutrition Medicine at the University of Surrey, UK, also tells NutritionInsight that as selenoproteins, selenium is an antioxidant that can reduce the oxidative stress produced by a viral infection. “It also acts as an anti-inflammatory agent and is crucial for a satisfactory immune response.”

According to the UK’s National Health Service (NHS), in addition to helping the immune system work properly, selenium helps prevent damage to cells and tissues. It also plays a role in reproduction. Good sources of the nutrient include brazil nuts, fish, meat and eggs. The recommended dietary allowance (RDA) for adults is 55 µg a day, with 400 µg a day being set as the safe upper limit. 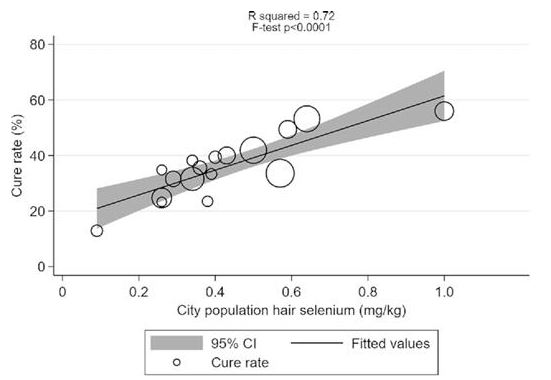 A correlation was found between cure rate and selenium levels. (Source: The American Journal of Clinical Nutrition)Delving into the data
Rayman’s study used real-time data collected from the Baidu website, a nongovernmental website that provides daily updates of the reports of the health commissions of each province, municipality, or city on numbers of COVID-19 confirmed cases, numbers cured, and numbers who died.

They found that at 13 percent, the cure rate inside Hubei Province was significantly lower than that in all other provinces combined (41 percent). However, Enshi – a city in Hubei – had a much higher cure rate of 36 percent. Notably, Enshi is renowned for its high selenium intake and status to such a great extent that selenium toxicity was observed there in the 1960s. Selenium intake in Enshi was reported as 550 µg per day in 2013.

Similar inspection of data from provinces outside Hubei shows that Heilongjiang Province in northeast China, a notoriously low-selenium region in which the city of Keshan is located, had a much higher death rate. The selenium intake was recorded as only 16 µg per day in a 2018 publication. The researchers also found a significant association between cure rate and background selenium status in cities outside Hubei.

As China has populations with both the lowest and the highest selenium status in the world, the study had ample space to look at variation. Rayman explains that these differences are related to the physical size of China, meaning there is a large capacity for variation in terms of geology, soil pH, organic matter (which can bind to selenium) and selenium deposition by monsoonal precipitation.

“Northern Italy [where COVID-19 took grip early on] has a fairly low selenium intake, as is the case for most of Europe. However, we could never see the same variation in selenium intake or status as occurs in China, which is exceptional in this respect,” notes Rayman.

Calls for further researchToo much selenium presents its own risks. (Source: Dr. Margaret Rayman)
Rayman is cautious when looking ahead, acknowledging that the association shown is far from being robust to criticisms of confounding. At best, it points toward the need for further research, particularly when viewed in the context of associations between selenium status and disease outcome found with other viruses, the researchers note.

“We would need to do a randomized controlled trial in COVID-19 patients before selenium supplementation could be recommended. At the moment, all we have is a correlation, which does not show evidence that additional selenium would reduce COVID-19 death rate. We have applied for permission to run a trial of selenium supplementation in COVID-19 patients, but we have had neither the permission nor the funding at present,” says Rayman.

Additionally, selenium supplementation is not appropriate for everyone as too much can be as dangerous as too little. Rayman notes that too much is associated with a range of health risks, including selenosis, alopecia and various forms of cancer.

However, other immunity-related nutrients have been in the spotlight, with some researchers calling for supplementation of specific nutrients, such as vitamins C and D, above the RDA, but within recommended upper safety limits. Dr. John of Dr. Paul Lohmann adds that the company has seen increased demand for immunity-supporting minerals and trace minerals like zinc, copper and iron during the pandemic.

In light of these rapidly changing developments, NutritionInsight is updating a daily news feed for the coronavirus-related information and insights you need to guide your business through this challenging period.

- Jarrow Formulas has launched its Probiotic+ Gummies, a new product line targeting digestive, immune and gut health. This is the first time the company ventures its... Read More