You are in : All News > Children nutrition market opportunities spotlighted amid chaotic regulation

22 Apr 2020 --- Much of the children’s nutrition category lacks regulation, which is creating some major gaps in the market that allow for the entry of poor-quality supplements. Nonetheless, industry can play a key role in making sure children live healthier lives, both in developed and developing countries, although a united approach is needed. This is according to key players, who also tell NutritionInsight about the unique needs of children, which is leading to market segmentation.

“Early childhood years are developmentally important and set the stage for lifelong health and well-being. Nutrition throughout childhood is critical, as a diet with insufficient micronutrients can have a lifelong impact on physical and mental growth, development and function. The key nutritional needs are linked to keeping the child on a good growth and development trajectory,” explains Odd Erik Hansen, CEO of Glycom, which was recently acquired by DSM for US$826 million.

He defines the children’s nutrition sector as including children from the age of about one year to 18 years. While children consume foods that share many commonalities with adults’ foods, they are undergoing major growth and change, which sets them apart from other age groups, adds Bruce McConnell, Head of Business Development at Glycom.

“Children’s nutrition is a very specific category because children are growing fast, have greatly increased nutrient needs and are often picky at the same time. Compliance is much harder to achieve than with adults, who understand the health benefits, or infants, who can seamlessly receive supplements with food. Therefore, the challenge we are faced with as product developers is to provide a very demanding user with everything they need. This means a complete package of rich formulations, great taste and friendly delivery formats,” explains Maja Orešnik, Science & Research Director of PharmaLinea.

Addressing the key needs
Orešnik highlights the key nutrition needs that most often require supplementation in children, which are vitamins, minerals and other micronutrients. Moreover, the most common deficiencies include iron, calcium, vitamin K2, vitamin D3 and DHA. As a result, much of PharmaLinea’s portfolio is developed to address these needs in a child-friendly way.

The >Your< K2+D3+Ca Line targets the main nutrient deficiencies affecting bone health. Meanwhile, the >Your< Iron Line is available in syrup, drop and spray forms in over 15 markets. According to Orešnik, a big part of the success can be attributed to taste and consequent compliance, which is especially challenging in iron products. Notably, the WHO published guidance on assessing iron levels this week – a move applauded by many in industry. 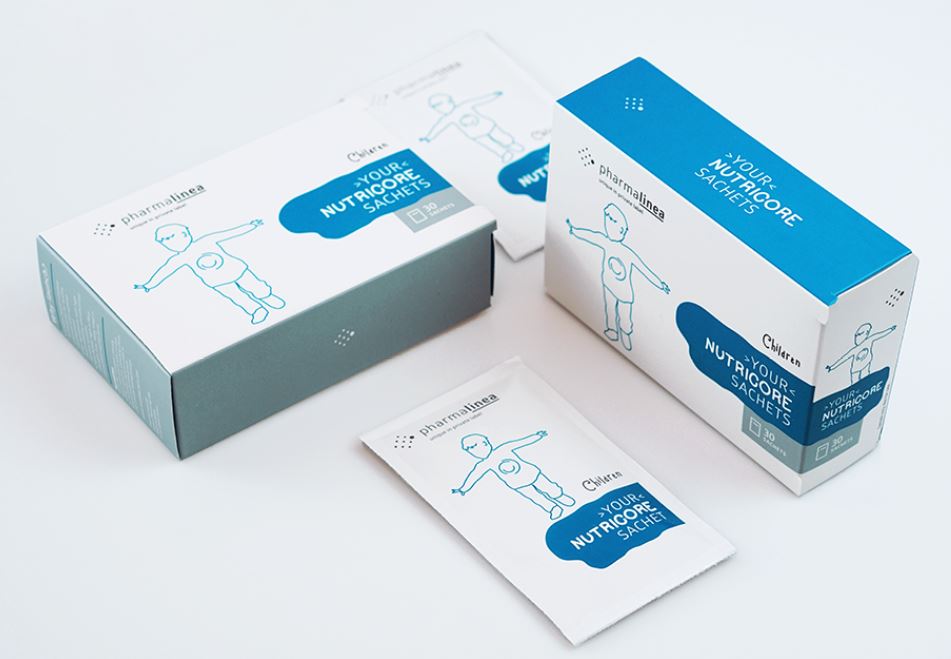 PharmaLinea’s >Your< Nutricore Sachets contain iron, K2, D3, calcium, vitamin C, protein, choline and inulin.Meanwhile, Glycom spotlights digestive health as a key area for children’s nutrition, thanks to its impact on aspects of overall well-being including immune, metabolic and mental health. Hansen further explains that this is especially important in the early years as a child’s microbiota changes from that of an infant to that of an adult. “During this period of change, a child’s microbiota is less stable and the trajectory can be perturbed with far-reaching consequences,” Hansen flags.

“Imbalances in the microbiota have been linked to a large range of conditions such as irritable bowel syndrome (IBS), inflammatory bowel disease, allergies, Type 1 diabetes, depression and Parkinson’s disease. Once the microbiota is set, it is more difficult to change it,” he adds.

Glycom is addressing these needs with its human milk oligosaccharides (HMOs). In infants, they are key to shaping the gut microbiota and developing the gut barrier and the immune system. The company has also recently completed a clinical study in children aged 5 to 12, which showed improvement in the microbiota. According to McConnell, “no one else has carried out similar studies in this population.”

“We have also completed clinical studies showing a beneficial impact of HMOs on IBS symptoms in adults and these results are also applicable to children. In addition to HMOs, omega 3 DHA, vitamins and minerals are pivotal in addressing children’s nutritional needs, which directly relate to immune, metabolic and mental health,” he adds.

Lack of regulation
Across the nutrition industry, regulation is key to shaping the space. However, Orešnik notes that in Europe, there is a lack of regulation for additives in food supplements for children. “Regulatory speaking, after the phase of young children [one to three years of age], users fall under the adult category, even though they clearly have different needs at say age four. This means there is some guessing in the industry and conclusions made based on other categories such as infant formula, but this is not necessarily correct,” she explains.

“What industry can do on its own is strive toward cleaner formulations, to begin with, and thus avoid any dilemmas. Luckily, consumer demand for free-from is a big driver in itself and is decreasing the role of regulation in this matter,” she adds.

Orešnik continues that another major challenge is that certain deficiencies are not recognized enough. “If the parents are not aware, then nobody will be addressing them. It is up to the industry to educate, and I believe we are progressing well in that area,” she states.

Additionally, Orešnik notes that the children’s nutrition market has been overwhelmed with poor-quality multivitamin formulations or cocoa powders with lots of sugar and commodity vitamin sources. “We wanted to present a clinically supported alternative to both of these. This all-in-one product needed to cover as many micronutrient needs as possible – both physical and cognitive – in a single dose and be accepted by children,” says Orešnik.

As a result, PharmaLinea’s R&D team came up with >Your< Nutricore Sachets, which contain iron, K2, D3, calcium, vitamin C, protein, choline, inulin and more. “The cocoa treats can be mixed in any food and are allergen-free, high in fiber and plant-based. This is an indication of where children’s nutrition is going and how it is growing in complexity.”

Challenges across the globe
Meanwhile, Hansen of Glycom cites malnutrition – both under- and incorrect-nutrition – as the major challenge facing children’s nutrition. “This is not only malnutrition of the child but also malnutrition of the mother because the mother’s health has a significant impact on the child’s health. In the developing world, undernutrition deprives a large number of children of optimal growth and development,” he says.

Generally, this stems from a basic lack of sufficient food. However, in many cases, there is sufficient food but the child has poor digestive health and this negatively impacts the child’s overall nutritional status and health, he elaborates.

“Industry can help here by making available affordable ways of maintaining digestive health, for example, through prebiotics such as HMOs and probiotics. In other cases, the issue is a lack of critical nutrients, such as vitamins and minerals. Industry can make these critical nutrients widely available and affordable. Many children succumb to infections who probably would not if they had improved digestive health and the nutrients critical for immune health,” adds McConnell.

Looking ahead
With consumers across the board seeking more individualized solutions, segmentation will be a major trend to watch for in children’s nutrition, flags Orešnik, who adds that the sector is becoming more and more developed. “Industry is addressing specific concerns and niches such as children’s vision, children’s urinary tract, gut health and cognition.”

She also explains the importance of delivery formats, explaining that there used to be very little adaptation to fit children. However, now there are many product forms and this is one of the main focuses of development. “Nonetheless, we are cautious with chewables and gummies that resemble sweets. Long-term implications of creating the notion that candy-like forms are good for your health are still unknown and we, therefore, remain with formats with a clearer differentiation.”

Meanwhile, Hansen notes that over the last five years, there has been a major increase in the understanding of the role digestive health and the microbiota play in overall growth, development and health.

“Previously digestive health was viewed in isolation and as being restricted to the gastrointestinal tract. However, it is now very clear that the gastrointestinal microbiota has a major impact on overall health and needs to be in symbiosis with the body. Consequently, Glycom believes the children’s nutrition sector will increasingly focus on digestive health,” he concludes.

This week, Innova Market Insights revealed that free-from and superfood positionings are becoming increasingly important in post-weaning categories. While all infant nutrition launches are rapidly growing across all sub-categories, baby snacks are leading the charge.

G7’s US$4.5B malnutrition action plan a “fraction of what is needed,” Oxfam flags

A decision by the G7 foreign ministers to spend US$4.5 billion in tackling malnutrition exacerbated by the ongoing war in Ukraine has failed to deliver what is actually... Read More