You are in : All News > Amoeba-produced compounds hold potential for high-yield, cost-effective cannabinoids 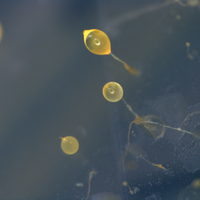 08 Mar 2022 --- German researchers are developing a new process for creating nutrients and cannabinoids in a cost-effective way. The method, which centers around amoebae, is currently being investigated for THC, but it could also be harnessed for CBD and resveratrol.

“CBD production differs by THC production through one single biosynthetic enzyme. We are currently following both approaches,” co-leader of the study Falk Hillmann tells NutritionInsight.

He notes that other production methods include direct chemical synthesis or purifications from plants. However, these can be costly due to low amounts in the case of chemicals or purity problems in the case of plants.

“So far, we are still aiming for the end product THC or CBD. Once achieved, we have to optimize cellular production levels – this would rule out both drawbacks. If successful, it will be the superior production method. This is precisely our next aim.”

The team is aiming to have the production prototype in the next two years. “Our bioprocess is already advanced. Soon after this point, we can offer a first product – the purified compound.”The chemical synthesis of THC tends to be expensive and has a low yield.

Spotlight on polyketides
The team is based at the Leibniz Institute for Natural Product Research and Infection Biology – Hans Knöll Institute (Leibniz-HKI) in Jena, Germany. Their results are published in Nature Biotechnology, and the scientists have filed a patent for the process.

The method produces complex natural products in amoebae called polyketides. These have a wide range of therapeutic applications, such as dietary supplements and various antibiotics such as erythromycin.

Olivetolic acid is another variety of polyketide that can be produced. It is one of the key cannabinoid precursors needed for the synthesis of THC.

Bypassing genetic modifications
Currently, bacteria like E. coli or the yeast Saccharomyces cerevisiae are used to make cannabinoids, but neither are native producers of natural products.

Accordingly, a large number of genetic modifications is necessary to enable synthesis in these classic model organisms.

One promising alternative put forward by the researchers is the amoeba Dictyostelium discoideum, which already possesses numerous biosynthetic genes for the production of natural products such as polyketides.

Specifically, the researcher noticed a high similarity between the amoeba’s genes and plant biosynthetic genes.

Putting the theory to test
To test how well D. discoideum is suited as a chassis organism for biotechnological production, the researchers first had the amoeba produce resveratrol, also a polyketide.

Afterward, they incorporated the plant enzyme that produces the THC precursor olivetolic acid into the amoeba’s genome. However, the addition of chemical precursors was still necessary to enable the synthesis.

To circumvent this, the researchers took advantage of the amoeba’s natural properties and combined the plant enzyme with an amoebic enzyme.

“The amoeba is able to produce the required precursor, a hexane unit, directly on-site,” Hillmann explains. Thus, the research team succeeded in producing a functional inter-kingdom hybrid enzyme that produces olivetolic acid without any further additives.A team from the Bio Pilot Plant at the Leibniz-HKI was also involved in the research.

Upscaling in process
The researchers are currently working on the upscaling and have already cultivated the amoebae at a 200 L scale. “Further work will also consider regulatory issues for production according to GMP guidelines. This seems feasible to us, but these organisms have never been used in pharmaceutical productions,” says Hillman.

The next goal is to insert the two enzymes that are still missing in order to be able to produce the final product, THC, in the amoebae.

“We are very optimistic about achieving this using gene technology methods like CRISPR-Cas9. This method is available for Dictyostelium and will be implemented in the next project,” he continues.

“However, the amoebae produce similar metabolites, which is very likely to give us an advantage over other systems in use like E. coli or baker’s yeast,” Hillman concludes.

The work is supported by the research group program of the state of Thuringia. Funding is from a variety of sources, including the European Social Fund and the German Federal Ministry of Education and Research (BMBF) as part of the “GO-Bio initial” program.

In December, the CBD industry weighed in on the maturing market, with alternatives becoming popular amid “fickle” consumer tastes.

A study published in Frontiers in Pharmacology on post-menopausal mice, investigates the potential of cannabidiol (CBD) on estrogen deficiency. The results showed... Read More

Researchers are exploring the effects of cannabidiol (CBD) on patients with heart disease as preclinical studies have been reviewed. The findings are said to be valid... Read More

As September marks Healthy Aging Month, the industry is tapping into innovation to advance this space. Healthy Aging month aims to spread awareness of the advantages of... Read More