You are in : All News > Replacing sodium with nutrient-rich yeast: Gnosis by Lesaffre spotlights industry innovation

20 Jul 2022 --- Gnosis by Lesaffre is seeking to drive innovation across the nutritional yeast market with products to support and maintain diverse metabolic functions. Spotlighting Red Star yeast as a salt-replacement with B-vitamin fortification and Noochy Crisp for a crispy add-on, the company elaborates on the products’ multiple uses.

“The general population is aware that consuming too much sodium can impact a general state of well-being and leads to several health issues; except reducing significantly the sodium intake in their daily life, consumers also look for healthy alternatives,” Julie Lemahieu, global market manager at Gnosis, tells NutritionInsight.

“Some ‘enlightened eaters’ add nutritional yeast to their meals bringing an umami taste to their soup, salad or pasta but also key nutrients, essential for a balanced diet,” she adds.

Red Star yeast is described as mustard-like, cheesy, nutty and crunchy, making it suitable as an add-on for salads and soups. While being a lead source of protein, “with its salty and umami taste, nutritional yeast can replace salt in culinary preparations,” the company notes. 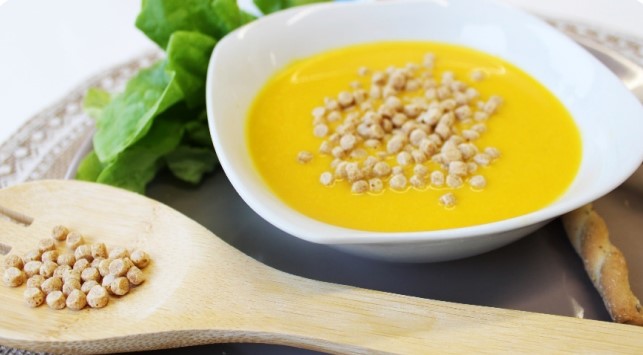 The yeast is rich in iron, phosphorus, zinc and magnesium which are essential for body function. Credit: Gnosis by Lesaffre.
Red Star is fortified in B-vitamins, making the yeast rich in vitamins B1, B2, B3, B6, B9 and B12. The company notes that these vitamins are essential for immune health, energy metabolism and production, and psychological functions.

Yeast is considered one of the oldest industrial microorganisms, first identified in 1860 as a living organism due to the invention of the microscope and scientific advancements. Due to the nutritional profile of yeast, it can be used in applications other than fermentation, the company notes.

The yeast market has “exploded,” notes the company. The product is most popular among vegetarians and flexitarians, which may explain the boom in demand in 2020, where the market’s growth rate was recorded at 36%.

Tackling challenges
The market for nutritional yeast increased during the COVID-19 pandemic and has been defined as a superfood, trending mainly in Europe and the US, industry players previously highlighted.

“The main challenge in the nutritional yeast sphere is bringing innovation in this increasing market, bringing new forms or consumption occasions to consumers. They are open to new culinary experiences but are likely aiming to consume fewer animal-based products, whether for personal health, sustainability, or animal welfare reasons,” says Lemahieu.

“For all those reasons, Gnosis by Lesaffre has developed a nutritional yeast in crisp form, to extend ways to consume it and improve consumer awareness of its benefits.”

Replacing tradition with innovationThe biggest challenge mentioned by the company is to provide new formats to incentivize consumption.
Beyond Red Star yeast, the company also touts its Noochy Crisp item described as “the newest form of nutritional yeast,” as traditionally sold in powder format or flakes. Instead, this format provides a crispy add-on to one’s meal and a new way to consume it.

Strained from Saccharomyces cerevisiae, rich in zinc, phosphorus, iron and magnesium, “these four minerals are trace elements essential for the proper functioning of the human body,” the company notes.

Additionally, being rich in fibers and proteins while low in saturated fat and salt, it may serve as an alternative to reduce sodium intake as it provides an “umami” – salty – flavor. It also provides a crunchy consistency. Therefore “it can replace traditional croutons,” the company argues.

Industry members have previously been skeptical of consumers’ willingness to accept the umami flavor as an alternative to salt. However, sodium reduction has been highlighted as the primary pathway to reducing the high numbers of high blood pressure, heart diseases and strokes, which are the leading cause of premature death globally.

Too much protein may lead to microbiome imbalance, impacting athletic performance

Researchers from five universities reveal that loading up on protein or carbohydrates before an athletic event can lead to microbiome imbalance and directly affect... Read More

Azelis has extended its distribution agreement with KMC, a potato-based ingredients provider. With the addition of KMC’s portfolio of potato starches and proteins,... Read More