You are in : All News > Calls For Government to Curb Salty Junk Food 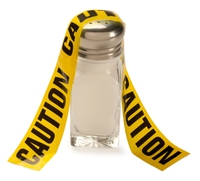 Francesco Cappuccio, Professor of Cardiovascular Medicine & Epidemiology at the University of Warwick’s Warwick Medical School is making the appeal after conducting 30 years of research into the diets of populations around the world.

His latest study has been published in BMJ Open. It indicates that across Europe people of low socio-economic background eat more salt than those on higher incomes – which can contribute to the lower life expectancy seen in these groups.

Professor Cappuccio said: “The government can do something about this by discouraging manufacturers from producing cheap, salty food and distributors from selling them. These are the types of foods consumed by those on lower incomes because they are inexpensive but ultimately they have a detrimental effect on your health.”

The study, the Geographic and socio-economic variation of sodium and potassium intake in Italy, also unearthed a significant north–south divide. In a previous study Prof. Cappuccio found similar results across Britain where salt intake is higher further north in Scotland compared to more affluent, southern parts of the British Isles. He believes that his latest study demonstrates that social inequalities in salt intake are a Europe-wide problem.

The research examined 3,857 men and women aged between 39-79 years. They found that across Italy there was an association between salt intake and income and educational attainment. Those in lower skilled jobs showed higher salt consumption compared to those in top managerial jobs. There was a similar relationship between education as those who were educated to just junior school level ate 5.9% more salt that those with university degrees.

National guidelines advise that adults should eat no more than 6g of salt a day which is approximately equivalent to one teaspoon and children should eat less. Previous studies show that a 5g per day higher salt intake is associated with a 24% higher risk of stroke.

Professor Cappuccio said: “Dietary salt, primarily sodium chloride, is commonly used for food preservation and seasoning. In most westernised countries, like the UK, approximately 75% of salt consumed is hidden in processed and restaurant foods whereas only about 15% comes from discretionary use such as added at the table or in cooking by the consumer or food handler and 10% from natural sources.

However, important limitations of the study were recognized by the authors, not least that they were unable to differentiate between sodium which had been added to foods naturally and sodium-rich foods. The authors said of this, “we cannot attribute the differences in salt intake to discretionary or dietary sources.”

There is a lot of confusion and debate around salt and how detrimental to health is really is. Mineral-rich sea salts are often argued to be better for health, not least because the magnesium they contain acts as a natural buffer against hypertension and many scientists believe that in this form, salt does not affect blood pressure or the risk of stroke and cardiovascular incidents. However, others such as Professor Cappuccio are convinced that the evidence points overwhelmingly to the dangers of salt. Perhaps it is necessary to  differentiate between natural unrefined sea salt and refined in studies. What is clear is that processed foods are detrimental to health for a variety of reasons, excess salt being just one of them.

The other argument around the salt debate is that only a specific group of people with salt hypersensitivity are at risk from hypertension and the diseases connected to this, whereas the rest of the population are unaffected by salt intake. In a 2011 review by the Cochrane collaboration looking at salt reduction interventions, the authors concluded that,
“Despite collating more event data than previous systematic reviews of randomized controlled trials, there is insufficient power to confirm clinically important effects of dietary advice and salt substitution on cardiovascular mortality in normotensive or hypertensive populations. Our estimates of the clinical benefits from advice to reduce dietary salt are imprecise, but are larger than would be predicted from the small blood pressure reductions achieved. Our findings do not support individual dietary advice as a means of restricting salt intake.”

Over 700 million people living with untreated hypertension, says WHO

The number of adults aged 30 to 79 years with hypertension has increased from 650 million to 1.28 billion in the last thirty years. The figures are according to the... Read More