You are in : All News > Unlocking hemp hulls: Brightseed AI discovers “powerful” compounds for metabolic health

09 Mar 2022 --- The outer shell of hemp seeds – which are usually discarded – contain two health-beneﬁting compounds, according to a Brightseed investigation using its Forager AI platform.

N-trans-caffeoyltyramine (NCT) and N-trans-feruloyltyramine (NFT) help clear fat from the liver, which could have applications for fighting obesity and managing non-alcoholic fatty liver disease (NAFLD).

“As with any new ingredient, there are challenges, but using hemp seed shells in this way does not impact the process of extracting hemp seeds in any way,” a Brightseed spokesperson tells NutritionInsight.

They continue that there are processing advantages as hemp seed shells are an environmentally-friendly, underutilized resource, and therefore cost-effective for sourcing these bioactives. 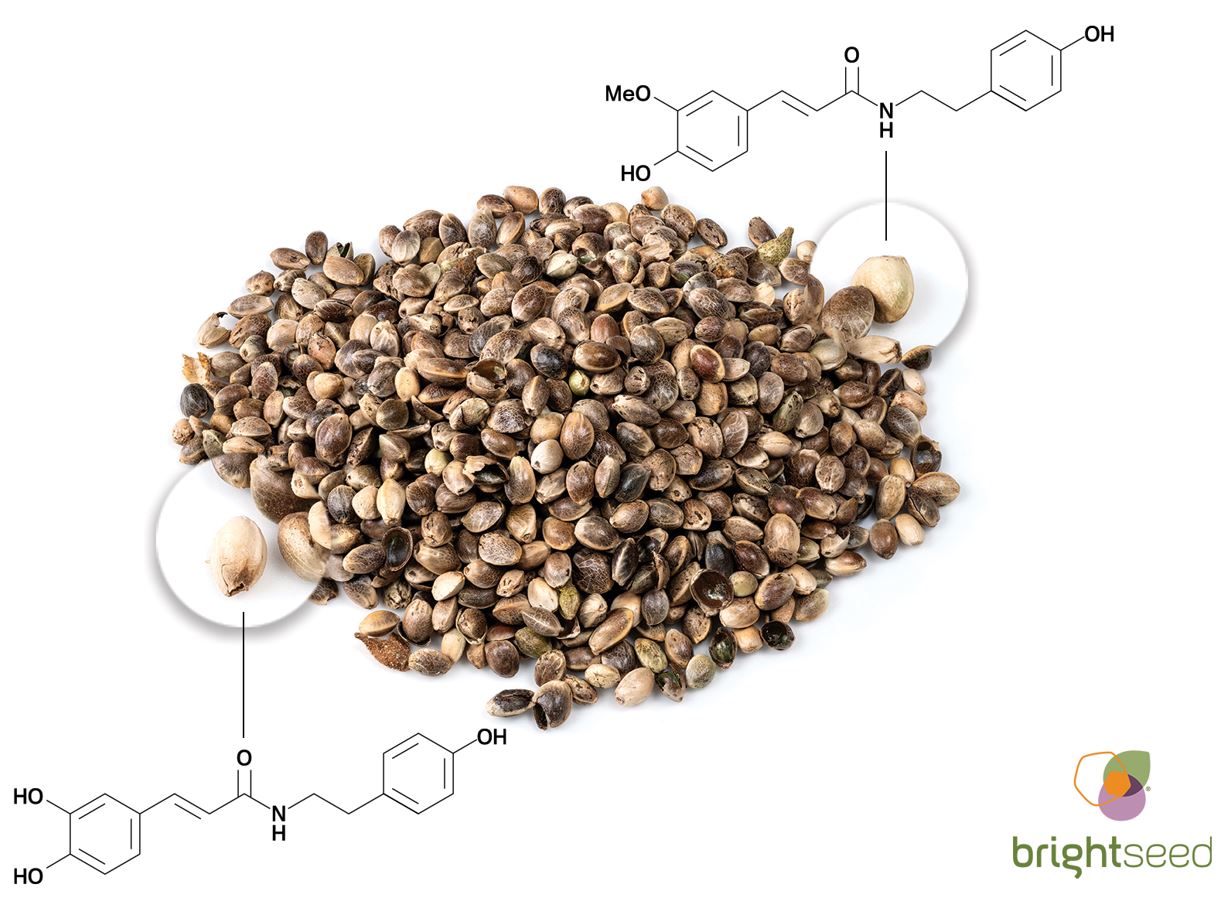 NCT (left) and NFT (right) are two compounds for metabolic health hidden in the outer shell of hemp seeds.

An “unassuming” resource
Beyond well-known cannabinoids, the hemp plant contains many bioactive phytochemicals with potentially therapeutic applications for human health.

Although a rich source of dietary ﬁber, hemp hull is largely discarded and has remained an unassuming part of the hemp plant.

“Hemp is one of the most sustainable and versatile crops on the planet, and hemp hearts are celebrated for their dense nutritional proﬁle,” says Soﬁa Elizondo, co-founder and COO of Brightseed.

“The irony is that industry has been tossing the seed shells, or the outer wrapper of hemp hearts, without realizing they are a potential goldmine for human health. Armed with new insight, we can make better use of this sustainable resource.”

Jim Flatt, co-founder and CEO of Brightseed, adds that it is important to factor in the role of climate and its impact on plant biodiversity and crop health.

“In addition to creating the data that will inform the future of plant-based health, sustainable sourcing is a priority as Brightseed brings plant bioactive discovery to fruition for food and health industries.”

Commercialization in the pipeline
Brightseed will now take the insights delivered by Forager AI and develop products so industry can gain access to NCT and NFT.

“These bioactives are naturally occurring in plants – such as black pepper – but they aren’t commercialized at this point,” says the spokesperson.

“Forager found NFT and NCT in over 80 plant sources, and where we source plant bioactives is a crucial part of how we design the next iteration of proactive and preventative health,” adds Flatt

Since these are compounds naturally found in common food products, Brightseed envisions that their regulatory classification would be food or food extracts.

“Brightseed is advancing the regulatory process for these bioactives in order to bring them to market,” notes the spokesperson. This announcement builds on Forager’s earlier discovery of NFT and NCT in black pepper.

Building on science
NCT and NFT have also been the subject of two preclinical studies, where they showed a “remarkable” ability to clear fat from the livers of mice and in human cells.

This signals a resetting and restoring of metabolism from poor to healthy, according to Brightseed.

The second study showed the compounds reduced body weight gain and accumulation of liver fat together with a reduction in liver inﬂammation when mice were placed on a long-term, high-fat diet. Moreover, NCT and NFT activated fat processing through a novel mechanism not previously reported in published literature.

Addressing the obesity crisis
This AI-backed advancement comes at a time when the global health community has been grappling with the “staggering” statistics on the connection between COVID-19 complications and total metabolic health, notes Brightseed.

Additionally, NAFLD is a chronic condition that has no approved treatments and impacts billions of adults worldwide, up to 25% of the global population.

Brightseed emphasizes that NCT and NFT have shown signiﬁcant potential to translate into human health beneﬁts, and the compounds are currently in human clinical trials.

Last November, the company received a US$200,000 grant from the Bill & Melinda Gates Foundation to apply its AI to improve birth outcomes.

Other endeavors also include a partnership with OFI on black pepper and garlic, as well as with Danone.