06 May 2021 --- The Association for the Cannabinoid Industry (ACI) and Centre for Medicinal Cannabis (CMC) has estimated the cannabidiol (CBD) industry will generate £690 million (US$959 million) in annual sales for 2021.

This figure surpasses predictions made in the seminal market sizing study undertaken by the CMC in 2019, which estimated the market would be worth £526 million (US$731 million) in 2021.

“We were expecting it to grow,” Steve Moore, co-founder and strategic counsel to the CMC and ACI, tells NutritionInsight. “It was always likely that when levels of stress and anxiety would rise with the various lockdowns we’ve had here in the UK, the pandemic would increase demand.”

In response, the ACI and the CMC launched a report titled Green Shoots – Sowing The Seeds Of The New UK Cannabis Industry to highlight some of the present obstacles to better regulating CBD in the UK and provide recommendations.

Regardless of the UK CBD sector’s growth, legislative and policy barriers hinder its affluence. Also, the report stresses the available market estimates of the sector’s size and value have remained either partial, dated or sector-specific.

An “accidental” revolution
The report reveals that the estimated £690 million in CBD sales for 2021 is a significant hike from £314 million (US$436 million) since 2019. This figure is nearly a third higher than the last projection in 2019.

“CBD slipped through the net with regulators everywhere in the world,” says Moore. “So far, it’s happened sort of by serendipity, rather than through actually deliberate public policy.”

Instead of enforcing legislation against CBD consumption, Moore points out UK regulators have tried to embrace the significant civil consumer demand.

“We know that the market is big. What we don’t think is that it has a proportionate level of public policy oversight. What we need to do is put them on a formal footing.” 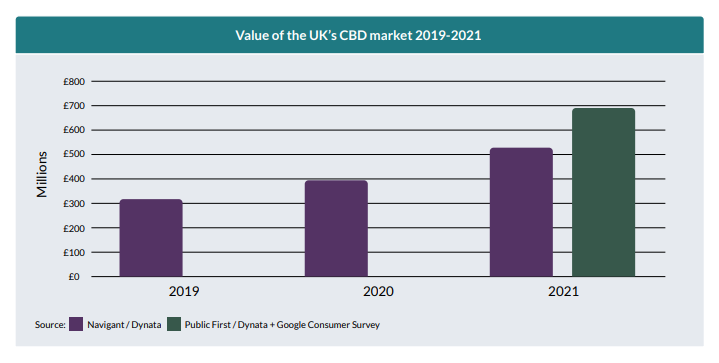 The UK CBD market grew by approximately a third more than predictions estimated in 2019 (Credit: ACI/CMC).Organizational hurdles
The report indicates the UK cannabinoid market has yet to achieve its full potential. Due to domestic restrictions on hemp cultivation and processing in the UK, the bulk of the profits for the industry are going overseas.

Concerns about THC presence force UK farmers to destroy parts of the hemp crop. “It is ludicrous that they’re basically being asked to trash the most lucrative part of the plant,” flags Moore.

Hemp cultivation licenses are further difficult to come by. “We think the licensing process should be transferred to the economic development departments rather than the homeland security departments, both for medicine and for nutriceuticals,” Moore continues.

The report estimates around one-third of the entire domestic market of consumer CBD products could be serviced by homegrown hemp supply if the current estimated acreage of hemp grown in the UK, approximately 2,000 acres, increased tenfold within two years.

Legislative woes
The regulators whose functions touch the cannabinoid sectors – the Food Standards Agency (FSA) and the Medicines & Healthcare products Regulatory Agency (MHRA) for novel food applications and drug licensing, respectively – are viewed by the ACI as “not experienced in cannabinoid science.”

Moreover, they have had to adjust to the “rapidly evolving sector in real-time as the consumer and patient demand for cannabis-based products has spiraled.”

One of the greatest concerns in the UK CBD sector is that most laws relating to the cannabis plant are decades-old and have not been updated to reflect new scientific findings.

The report points out even most regulations, including in the UK, that directly impact CBD are from the early 2000s – “long before over-the-counter CBD became an important consumer trend.”

“The government is trying to build the economy after the pandemic. Now that we are out of the Brexit transition and on our own in the UK, these things are really important.”

The report’s suggested institutionalized architecture could provide an evolving evidence base for commercial or pharmaceutical applications (Credit: ACI/CMC).Vision for improvement
The report argues it is time for the government to adopt a proactive strategy to seize opportunities in the cannabinoids sector.

The key pillars of the suggested architecture include:

Pronouncements from the FSA to create a legal, regulatory pathway for CBD products as novel foods are sending “ripples of reassurance” through the consumer market, says Moore.

“Previously I think the gray market was operating before regulation and people probably may have had reasonable concerns about the safety of the products.”

Consequences of inaction
A 2019 survey estimated that 1.4 million people in the UK use black market cannabis to directly treat medically diagnosed medical conditions. This compares “extremely poorly” with the DHSC estimates of between 149 and 224 unique patients between November 2019 and October 2020.

Should the UK government fail to act on this growing market, Moore warns the consequences may be detrimental for the global industry.

“We don’t want the consumer confidence to be undermined. We’re on a good trajectory and we want to stay at that,” he states.

“We need to keep that momentum up; then I think the rest of the world will look to the UK as an example of a country that has embraced good public policy and helped develop what is effectively a whole new sector.”

A study on active nutrition published in Frontiers in Nutrition shows that almonds might boost exercise recovery molecules by 69% among those who work out regularly.... Read More