You are in : All News > Scientists map black-eyed pea genome, uncovering roots of crop resilience 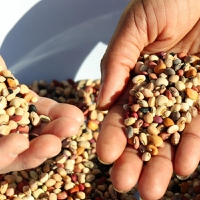 Black-eyed peas are small beans with dark midsections. The legumes have been a global dietary staple for centuries due to their environmental resilience and exceptional nutritional qualities, such as being high in protein and low in fat, as noted by the researchers. In sub-Saharan Africa, they remain a top protein source in the human diet.

Feeding a growing population of 10 billion people by 2050 with a healthy and environmentally friendly diet will be impossible without dramatically transforming the global population’s eating habits, improving food production and reducing food waste. Plant-based and meat-reduced diets offer a potential solution, as illustrated by an EAT-Lancet Commission study issued earlier this year, which calls for refocusing agriculture to produce varied nutrient-rich crops and increased governance of land and ocean use.

A “computationally challenging” procedure
A genome is the full collection of genetic codes that determine an organism’s set of characteristics, such as color, height and predisposition to diseases. All genomes contain highly repetitive sequences of DNA that UCR Professor of Computer Science and project co-leader Stefano Lonardi likens to “hundreds of thousands of identical jigsaw puzzle pieces.”

Lonardi described the process of figuring out how the said “jigsaw puzzle” sequences fit together as “computationally challenging.” In order to do so, Lonardi’s team assembled the genome many times with different software tools and parameters. Then they created new software capable of merging these various genome solutions into a single, complete picture.

This technology is the first high-quality reference genome for the black-eyed pea. The project began three years ago, made possible mainly by a US$1.6 million grant from the National Science Foundation (NSF). An additional US$500,000 NSF grant also supported the computational efforts.

As with humans, there are differences in the genetic code of individual black-eyed pea. Knowing which genes are responsible for qualities in individuals such as color, size, or pathogen resistance will help breeders develop new varieties that are even better able to withstand external challenges.

“Having the genome sequence helps scientists make decisions about the choice of parent plants to crossbreed in order to produce their desired progeny,” notes Close.

One of the black-eyed pea traits that scientists are now trying to understand is its remarkable ability to recover from drought stress.

“We’re trying to figure out why black-eyed peas are so resilient to harsh conditions,” says Close. “As we move into a world with less water available to agriculture, it will be important to capitalize on this ability and expand on it, taking the lead from black-eyed peas to guide improvements in other crops that are vulnerable to climate change.”

Research on black-eyed peas started at UCR more than 40 years ago. But black-eyed peas’ presence in Riverside predates the university by about 200 years. “The black-eyed pea has been here supporting people since early colonial times,” says project co-leader Timothy Close, a UCR Professor of Botany and Plant Sciences. “It's nice that we’ve brought this plant with so much local history up to state of the art for scientific research.”

With the success of this project, the black-eyed pea joins only a handful of other major crops whose genomes have been fully sequenced. The team’s work on the project was published in the June issue of The Plant Journal.