You are in : All News > Resistant starch: A promising ingredient in battling malnutrition in infants

Resistant starch: A promising ingredient in battling malnutrition in infants 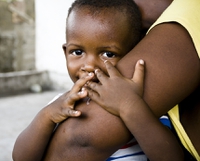 27 Feb 2018 --- An ingredient as simple as resistant starch could hold the answer to reducing malnutrition among infants in low-middle income countries, according to a study led by researchers at Flinders University in South Australia. Resistant starch occurs naturally in foods such as oats, maize and green bananas but can also easily be added to food products. The addition of this prebiotic is thought to aid gastrointestinal health, which is of particular importance in areas where sanitation is lacking.

As part of their study, the researchers added the prebiotic to stools collected from pre-weaning and early weaning infants in an African village.

“With this method, the resistant starch is incubated with the feces in a test tube to determine fermentative capacity in a process that mimics digestion,” Mortimer says.

In a team led by Professor Graeme Young, the researchers found that both groups did have a fermentative capacity using an in vitro model. This fermentative capacity resulted in the production of the short-chain fatty acid acetate, which is important for gut health as it aids in reducing gut inflammation, regulating lipid and glucose metabolism and providing an energy source.

“It was previously understood that infants, especially those prior to weaning, were unable to ferment complex carbohydrates, having a less mature gut microbiota than adults and older children, with fewer bacteria which degrade polysaccharides and produce short chain fatty acids (SCFAs),” Elissa Mortimer explains.

“The use of prebiotics in low-middle income countries could be particularly beneficial owing to the damage to the gut from environmental pathogens in the everyday environment because of poor water and sanitation,” Mortimer says.

Repeated infections with these pathogens lead to repeated episodes of acute diarrhea and a sub-clinical syndrome called Environmental Enteric Dysfunction (EED), which is characterized by damage to intestinal structure and function.

“In a study done by Dr. Geetha Gopalsamy, a Ph.D. student with our team here at Flinders University, it was shown that healthy Australian infants do have the ability to ferment complex carbohydrates even prior to weaning. This is of particular interest with prebiotics such as resistant starch which cannot be digested by human digestive enzymes and pass into the large intestine undigested where they act as a substrate for bacterial species residing there,” Mortimer explains.

“These species ferment the resistant starch, producing the SCFA metabolites which provide a variety of benefits including maintenance of gut integrity and regulation of inflammation and metabolism. SCFAs also provide an energy source for colonic epithelium cells which, in a context of poor food security can make a big difference to health outcomes,” Mortimer adds.

The Flinders University study is yet to be published, but Mortimer sets the estimated timeline for publication at about six months.

The resistant starch study builds upon previous studies by Mortimer and her colleagues, which analyzed the effect of a type of resistant starch called High Amylose Maize Starch in older children (3-5 years) in Malawi and India.

“Both of these studies showed that the study participants were able to ferment the resistant starch and that it modulated the gut microbiota and increased the concentration of SCFAs,” Mortimer says.

The High Amylose Maize Starch (HAMS) used by the researchers in these studies can be easily added to baked products such as biscuits, cookies and bread.

“The texture of HAMS is similar to normal wheat flour and there is no taste and little change to texture. In terms of products for infants, it has been added to complementary foods such as rice cereal or other infant porridges made from grains or pulses with good effect,” Mortimer adds.

“In terms of future studies, we have already completed a study with early-weaning infants in India in which we fed resistant starch by adding it to complementary foods which the infants consumed,” she says, adding that the results are pending, with lab work expected to be completed in the coming six months.

The UN’s dedicated children’s rights organization, UNICEF, reports that “nearly half of all deaths in children under 5 are attributable to undernutrition, translating into the loss of about 3 million young lives a year.”

The greatest risks associated with malnutrition are an increased prevalence of common infections, as well as increases in the frequency and severity of such infections. Poor nutrition in the first 1,000 days of a child’s life can also lead to stunted growth, which is “associated with impaired cognitive ability and reduced school and work performance,” UNICEF notes.