You are in : All News > Recovery top of mind for FrieslandCampina as it assists Olympic athletes

Recovery top of mind for FrieslandCampina as it assists Olympic athletes 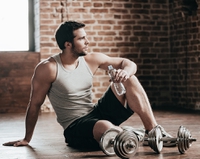 20 Nov 2017 --- The focus on recovery is a hot topic in the world of sports nutrition. Its benefits may run deeper than many realize: René Kleinsmit, Product Group Manager at FrieslandCampina DMV, notes during a webinar hosted by NutritionInsight’s sister website FoodIngredientsFirst that those at the company talk about “recovery” when they actually mean “grow” or “build.” Topics important to the company therefore include optimal recovery times and muscle-building benefits, even while sleeping.

Thanks to the mainstreaming of sports nutrition, there is more interest than ever from general consumers in the nutrition of athletes. FrieslandCampina is very active in this space and has shared details of the benefits of dairy proteins in its work with TeamNL in the run-up to the 2018 Winter Olympic Games.

Protein supplements assist recovery
FrieslandCampina has developed five types of protein supplements – whey and casein-based – for all athletes of TeamNL. These proteins, which are tested for banned substances, will be a part of their training and nutrition strategy on their road to the next Olympic Games.

When considering protein intake immediately after exercise, Kleinsmit says that we traditionally think about recovery from resistance exercise. However, the impact of post-exercise protein on the synthesis of new muscle proteins has also been studied after moderate-intensity aerobic exercise. 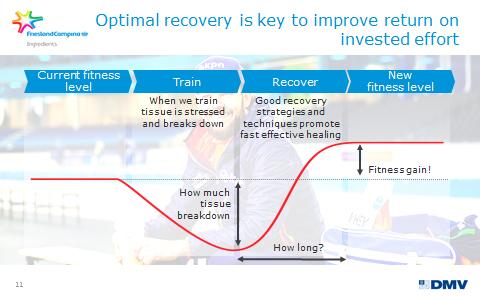 Click to EnlargeIn both cases, it has been found that about 10g of complete protein increases muscle protein synthesis as compared to placebo or carbohydrate alone. Therefore, if 10g is enough to start the process, there is a question of how much protein will maximize the benefit.

Moving on, Professor Jeukendrup cites Daniel R. Moore’s study which compared bolus feeding with intermittent feeding and pulse feeding. The highest rates of synthesis in the study were achieved with four separate feedings of 20g of protein. Professor Jeukendrup speculates that the mechanism may work in a way that means you need a certain amount of protein and lucein to turn on synthesis machinery. If the feeding is too small, it may not turn that on enough. If it is too large, it may turn on the synthesis, but not during enough moments in the day.

Protein before bed
A recent discovery that has also been of great interest to FrieslandCampina, Professor Jeukendrup and the general protein space has been Dr. Luc van Loon’s study showing that protein ingestion before sleep can optimize post-workout recovery during the night. Since the initial breakthrough, similar effects have been shown with 30g of casein. This is a strategy an elite athlete should consider, Professor Jeukendrup notes.

Intake before going to sleep has lots of benefits, says Kleinsmit. There is plenty of time to have a protein shake with casein, which has a slow amino acid release. It builds muscles while someone is asleep like a “small miracle.”

Responding to a question about the best types of protein applications to fit the time before bed, Professor Jeukendrup remarks: “This is a very practical question, and also one I have to deal with a lot when I work with athletes. The answer is that it’s incredibly individual, and I haven’t seen one product that works for everyone. Some athletes prefer solid food; some prefer a drink because it’s easier and some don’t like it because it wakes them up during the night. My mom always told me to drink a glass of milk before I go to bed, so maybe that wasn’t bad advice after all.”

“Getting to 30g can be a struggle, so I have to work with athletes to find out what works for them. Sometimes they move to solid food; sometimes they move to a shake that they can tolerate. It’s very difficult to give one answer to that question that’s going to work for every athlete,” Professor Jeukendrup adds.

“It could also be a combination like a shake and a snack,” adds Kleinsmit.

Looking to future of protein space
Talking about the next big idea in the protein space, Professor Jeukendrup believes that it will be understanding the effects of adding other nutrients to protein.

“Go back to research that’s been done: more than 90 percent been done with isolated ingredients just for research purposes,” Professor Jeukendrup explains. “In reality, different people don’t eat ingredients; they eat foods. Combining your ingredient with others may change the efficacy of the ingredient; that’s something that we will learn more and more about in the future.

FrieslandCampina has also experimented with different delivery systems other than protein shakes and ready-to-drink varieties (RTDs). “We are looking constantly for new applications,” asserts Kleinsmit. “We have been, and are, supporting our customers by developing shakes, RTDs and bars. [In the future] we see some space for new applications driven by consumer demand.”

“They want more variation,” Kleinsmit observes. “So we are also looking for more indulgence products. At FiE later this month in Frankfurt, we will show the audience a high-protein carrot cake that contains approximately three times as much protein as a normal carrot cake.”