You are in : All News > Pomegranates Contain Powerful Anti-Aging Ingredient, Study Finds 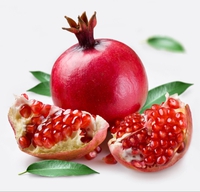 14 Jul 2016 --- A team of Swiss scientists have found another reason why pomegranates are good for you. They have found that the fruit contains potential anti-aging properties that may improve endurance and muscle strength. Details of the report are published in the journal Nature Medicine.

The pomegranate is already considered a superfood because of its multiple health benefits. For instance, a study in 2014 discovered that a compound of chemicals from the pomegranate may help slow down the progression of neurodegenerative disorders such as Parkinson's and Alzheimer's disease.
Our cells often rely on a process called mitophagy to recycle worn-out mitochondria — or the tiny powerhouses that create the chemical units that fuel cells. However, as we age, mitophagy begins to slow down and malfunction, affecting the recycling of mitochondria.
If this "cleanup" process does not occur, the worn-out mitochondria and their decomposing components accumulate inside the cells. This may cause the weakening of tissues and muscles.
In the new research, experts from the école Polytechnique Fédérale de Lausanne (EPFL) reported that a compound called urolithin A can bring back mitophagy in cells where it has become inactive.
Urolithin A is produced in the stomach when a certain pomegranate ingredient known as ellagitannins is digested by gut bacteria, researchers said.
"It's a completely natural substance," says Patrick Aebischer, a neuroscientist and the co-author of the new study. "[I]ts effect is powerful and measurable."
Aebischer and his team first tested the effects of urolithin A on a nematode worm called Caenorhabditis elegans. This worm is a useful model because it is multicellular, its cells have many features in common with human cells and it develops from a fertilized egg. And because the worm is considered elderly at eight to 10 days of age, it is a useful model for aging.
Scientists discovered that when C. elegans is exposed to urolithin A, the worms lived more than 45% longer on average. Urolithin A also prevented the buildup of worn-out mitochondria as C. elegans aged.
Young and Elderly Mice
Aebischer and his colleagues repeated their test on lab mice, revealing that exposure to urolithin A also led to a reduction in dysfunctional mitochondria.
Elderly mice at 2 years old that were exposed to the ingredient displayed 42% better endurance while running compared to other mice. Among young mice, exposure to urolithin A appeared to have improved exercise capacity.
Human Trials
However, although the results look promising, researchers say they are not suggesting that people should begin consuming more pomegranates to slow aging on the basis of their findings.
Scientists pointed out that it is not urolithin A present in pomegranates, but only a precursor known as ellagitannins. When this molecule is mixed with water in the gut, it is broken down into ellagic acid, which is processed by gut microbiome to yield urolithin A.
Furthermore, the amount of urolithin A produced may vary from person to person. In fact, this bacterium may even be absent in some individuals. If this is the case, researchers say it is possible that pomegranates will not give the person the benefits seen in the study.
With that in mind, Swiss scientists launched a biotech startup called Amazentis, which is on its way to developing finely calibrated doses of urolithin A.
The startup is testing the substance on human trials to determine its effects. Study authors hope that they will find similar results in humans.

23 Jun 2020 --- Certain over-the-counter virucidal products may reduce the presence of COVID-19 in the saliva of asymptomatic patients. This is according to a pilot study published... Read More

Pomegranate Extract May Reduce Inflammation in Overweight and Obese Individuals

19 Jan 2017 ---  A study from researchers at the Department of Cellular and Molecular Nutrition at the Tehran University of Medical Sciences, has suggested that oral... Read More

Healthspan May Be Extended by 50% by Altering Perception of Food

27 May 2016 --- New research has found that tricking C. elegans into a state of caloric restriction extends lifespan by 50 percent and suggests new targets for human pharmacology.