You are in : All News > Online shoppers bombarded with unhealthy marketing, while bacon salt levels branded “astonishing”

09 Jan 2020 --- Online grocery platforms are adopting harmful digital marketing tactics that mirror those seen in brick-and-mortar stores that undermine healthy eating. This is according to a new report from the Center for Science in the Public Interest (CSPI), which scanned six US retailers’ promotions, pricing, placement and delivery. Meanwhile, shoppers in the UK may also struggle to make positive choices, with a new survey from Action on Salt revealing that very high salt levels in bacon points to a lack of progress made by the food industry in meeting voluntary salt reduction targets. Both organizations highlight that manufacturers could play a larger part in providing healthy options, while retailers also have a significant role to play in empowering consumers to make good choices.

“It was not particularly surprising that the food marketing tactics that are used in-store have migrated online, and we would like to see retailers and food manufacturers to improve their practices in both spaces. Additionally, we are concerned about the targeted promotions. For example, 64 percent of Amazon Prime Now’s targeted promotions were based on the customer’s address (for example, ‘Popular Near You’) and 46 percent of them did not meet nutrition standards. This raises questions around personalized marketing and customer privacy, and we think it should be explored further,” Darya Minovi, CSPI Policy Associate, tells NutritionInsight.

The CSPI is concerned about targeted promotions online, leading consumers to make poor health choices.CSPI’s evaluation of Amazon Prime Now, FreshDirect, Peapod (Ahold Delhaize), Safeway, Target and Walmart Grocery found that over half of food and beverage promotions on online retailers’ home pages and search result pages were for unhealthy products (as defined by the National Alliance for Nutrition and Activity’s Beverage and Food Vending Standards). Additionally, more than three-quarters of the food- and beverage-related emails that retailers sent promoted unhealthy products.

These findings cast doubt on prior research suggesting that online grocery shopping could help reduce impulse purchases. New targeted marketing technology allows the industry to generate promotions and custom shopping lists that may reinforce unhealthy behaviors and biases. While the online grocery shopping sector currently accounts for 6 percent of total grocery spending in the US, CSPI notes it is set for rapid expansion. Therefore, this represents a valuable opportunity to take advantage of the potential to increase US consumer’s access to healthy food, says Margo Wootan, CSPI Vice President.

Supporting healthy eating
Minovi adds that online retailers could support healthy eating by allowing customers to search for specific products, rather than having to walk through aisles of junk food. However, she also notes that online retailers are not necessarily more likely to undermine healthy eating than brick-and-mortar retailers or vice-versa. “Instead, it is a case of retailers being able to do the same thing through a different medium. Rather than seeing a cooler of soda tempting you at the checkout aisle, you get a promotion for soda when you search for ‘drinks,’” she says.

As a result of these findings, CSPI is calling for the US Department of Agriculture (USDA) to develop policies for the Supplemental Nutrition Assistance Program (SNAP) retailers to highlight healthy products. Additionally, it proposes that the Federal Trade Commission complete a study of online retailers’ practices, including targeted marketing practices, while also calling on retailers to use promotions to support healthy purchases.

Brick-and-mortar supermarkets have long come under scrutiny for their marketing tactics. In July, a study found that supermarket layouts, pricing strategies and shopping environments are worsening the obesity epidemic. Meanwhile, a Spoon Guru survey discovered that less than 30 percent of UK and US shoppers believe that grocery retailers are doing enough to help promote healthy eating. 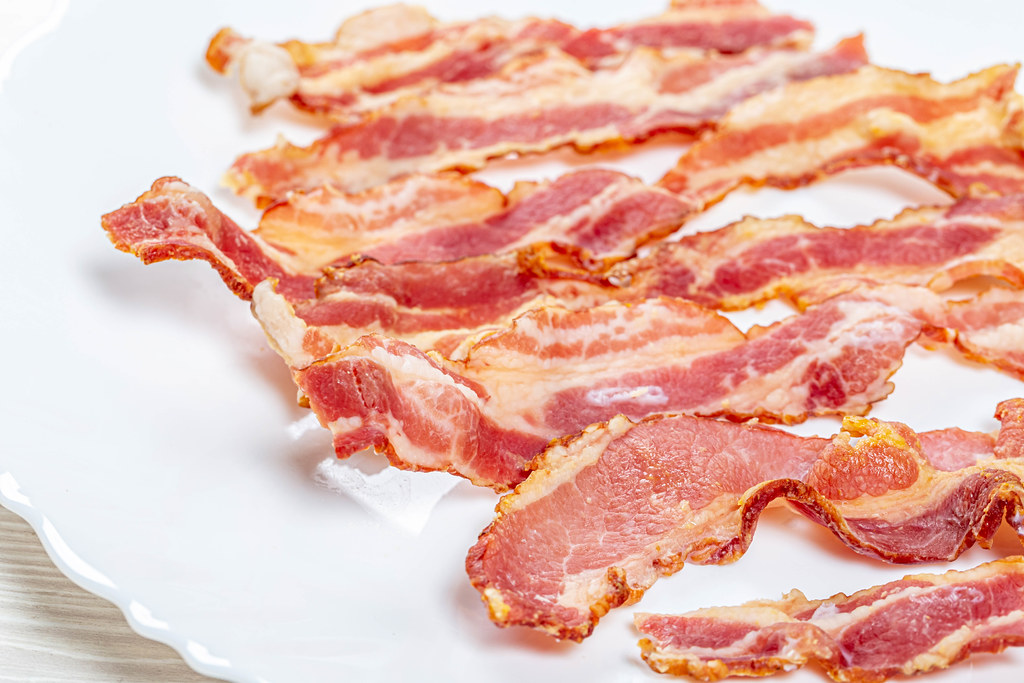 Bacon can contain far more sodium than is beneficial for human health, Action on Salt warns.The role of manufacturers
Minovi further highlights the role of manufacturers in creating shopping environments where shoppers may struggle to stay healthy. “Altogether, food and beverage manufacturers pay retailers US$50 billion a year in trade promotion fees to place and promote their products in grocery stores. This is formalized through contracts, where promotion terms are specified. While retailers demand these ‘pay-to-play’ fees, manufacturers could also choose to include a healthier mix of products from their portfolio in these contracts,” she proposes.

Also investigating the barriers to healthy consumers, Action on Salt recently revealed that two slices of bacon can contain as much as 2.84 g of salt – equivalent to more than eight bags of salted potato chips. Sonia Pombo, Campaign Manager and Nutritionist at Action on Salt, tells NutritionInsight about the interaction between manufacturer and retailer. While the saltiest bacon had a salt content of 4.3 g per 100 g, the least salty had just 1.45 g per 100 g, highlighting the viability of producing less salty offerings.

“Meanwhile, retailers have a significant role to play by ensuring that all of their own-label bacon products have clear front-of-pack traffic light labeling so that consumers can make informed and healthier choices when shopping in-store,” she says.

She continues that retailers and the food industry should be responsible for taking salt out of consumers’ diets. “Gradual reductions in salt content of all their bacon products will be hugely beneficial for public health, as it is the second biggest contributor of salt to the UK diet. In fact, reducing average salt intakes by just 1 g would save over 4,000 preventable deaths from heart attacks and strokes.”

Action on Salt is now urging the UK government to comprehensive salt reduction program. This could include mandatory targets for salt levels in products that all companies would be expected to meet and strict penalties or levies for those who fail to comply.

The salt content of plant-based meat products is “unnecessarily high,” with more than 75% of the products surveyed not meeting the UK government’s salt... Read More

A group of campaigners are calling on the sports world to remove junk food advertising from their industry while urging the UK government to take appropriate... Read More

UK retailers are demanding more time and clarity before the government’s laws to restrict where they can sell foods deemed high in fat, salt or sugar (HFSS) in... Read More

The US Food and Drug Administration (FDA) has unveiled sodium reduction targets for a broad range of processed, packaged and prepared foods. The 2.5 year guidelines come... Read More