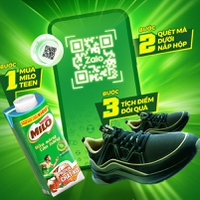 By scanning a QR code inside the caps from SIG’s combismile carton packs, users can collect reward points to redeem awards online via the Vietnamese messaging application Zalo – cited as the third most-used app by Gen Z.

“The use of smartphones has risen dramatically in the last five to ten years. We believe the QR code scanning rate is going to rise further and become quite dominant in day-to-day life. This technology has a lot of potential to evolve further with varied applications,” Ali Abbas, business executive officer for Milo and Milk, Nestlé Vietnam, tells PackagingInsights.

App users can trade in their points for rewards like movie theater tickets, sport shoes, and other sports merchandise. The campaign aims to better connect with younger consumers in Vietnam, while promoting brand loyalty. For example, placing the QR code inside the caps, not outside, ensures they can only be scanned after the product has been purchased and opened by the consumer.

Score in the morning
Running until next month, the marketing campaign also opens up more opportunities for Nestlé Vietnam to further strengthen its Milo product’s positioning as a popular breakfast drink. Notably, consumers can score more points when scanning the QR code at breakfast time between 6am and 10am.

“Nestlé Milo is a nutritional drink that provides energy and essential vitamins and minerals. Through this campaign, Nestlé Milo wants to encourage teenagers to have a regular, nutritious breakfast,” Abbas highlights.

App users can trade in their points for rewards like movie theater tickets, sport shoes, and other sports merchandise. The QR code and app also encourage teenagers to invite friends to collect points and spread the campaign in their community.

Gen Z’s digital coming-of-age
SIG maintains Vietnam has made a rapid digital transformation in socio-economic development and leads the world ranking with the largest number of internet users.

Social media such as Facebook, YouTube and Zalo are reportedly among the most important channels to reach Vietnamese consumers.

“These young consumers are looking for more than just product experiences – they want great brand experiences that provide emotional connections. They want to be entertained, rewarded and informed, all enabled by the powerful mobile devices they carry every day,” says SIG. 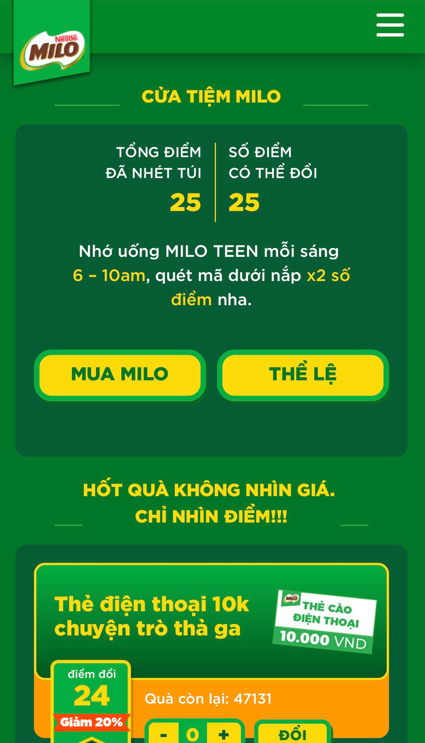 Consumers can score more points between 6am and 10am, a move which aims to promote Milo milks’ breakfast positioning.  The company further reports its digital marketing solutions allow every product to act as a data-driven information and media source. SIG’s QR code closure solution was first launched in China in 2020.

In 2019, a SIG survey revealed 50 percent of 3,000 interviewed consumers in China scanned QR codes several times a week. This figure was a stark contrast to Brazilian (7%) and European consumers (8%).

What’s next?
When prompted about how Nestlé aims to take advantage of QR codes’ “potential to evolve further with varied applications,” Abbas responds the company has “not yet decided” when and how we will use the QR code again.

“It will depend on the assessment of the campaign and how many people engaged with the campaign. We could decide to use it on other brands on other campaigns based on post-evaluation and assessment.”

Nevertheless, popularity for QR codes on-pack continues to gain ground. According to Innova Market Insights’ 2021 Consumer Survey, 54 percent of global consumers were interested in QR technology on F&B packaging. Only 4 percent had never heard of QR codes before.

A flagship project in Bangladesh that provides underprivileged children with healthy school meals using surplus crops has been launched by SIG Combibloc (SIG), under its... Read More