You are in : All News > Leveling the playing field in battling malnutrition in Africa: DSM highlights role of regulatory landscape

29 Mar 2019 --- Aside from a moral duty to ensure the global population has enough food to eat, nutrition interventions are absolutely critical for global social and economic development. The economic losses associated with micronutrient deficiencies can be at 2 percent of a country’s GDP, while specifically in relation to stunting, losses can reach 16.5 percent. For countries that are lacking basic social services – which is often the case where malnutrition is prevalent – this is a considerable amount that will actively hinder growth. This is according to Arnold Kawuba, part of DSM’s Nutrition Improvement team for the EMEA region, who spoke to NutritionInsight on the challenges of addressing malnutrition in Africa.

“Every US$1 spent on micronutrient programs, such as fortification, results in US$9 in benefits for the economy. If you look at all these factors, improving nutrition should be at the core and heart of what each sector is doing – private or public,” says Kawuba.

Malnutrition is an umbrella term which includes wasting, stunting, micronutrient deficiencies and obesity, and remains a problem that plagues populations worldwide. One continent that bears a particularly heavy burden is Africa. This continent thus requires focused support, particularly if we are to meet our universal goal of eliminating malnutrition by 2030, Kawuba notes.

“A chronic lack of essential micronutrients in a person’s diet, also known as ‘hidden hunger,’ can contribute to both short- and long-term health issues. Two billion people suffer from micronutrient deficiencies globally and, unfortunately, one-third of those people are in Africa. Women and children from low-income families are bearing the brunt of this silent killer. Twenty percent of all global women of reproductive age are suffering from anemia, again mostly in Africa. We need to address micronutrient deficiencies to support people’s health, wellbeing and enjoyment of life,” he explains.

This burden is particularly troublesome as, according to the 2017 Global Nutrition report, the continent faces the severe challenge of having children with stunting, as well as rising obesity rates, often in the same household. Recent studies show that a stunted child is likely to become obese when they become an adult.

The report, which studied nutrition in 140 countries noted that even though food production has expanded in Africa, this has not translated into nutritious foods that boost healthy lives. This means that there is a need to transform our food systems to become more nutrition sensitive.

Kawuba highlights a challenge in feeding the nation with adequate nutrition: there is a disproportionate focus on food security compared with nutrition security – but they should have equal weighting and go hand-in-hand.

“In the region I cover – Africa – we still have a focus on just calories, rather than ensuring that there is an appropriate balance of calories and nutrients. This means that the focus is on how many mouths are fed and not on making sure that people are nourished with nutrient-dense foods. Calories are important for energy, but people need adequate nutrition to live healthy lives. This is where fortification comes in.”

DSM’s Nutrition Improvement team works globally to address malnutrition and micronutrient deficiencies in developing countries. It primarily does this through staple food fortification and public health supplementation, for example, through micronutrient powders and therapeutic or emergency foods. In this way, DSM’s current role in fighting malnutrition has a range of contexts. Arnold Kawuba, part of DSM’s Nutrition Improvement team for the EMEA region.

Fortification programs are a safe, proven and affordable method of addressing micronutrient deficiencies amongst vulnerable populations, he says. Fortification can enhance the nutritional value of foods, adding essential vitamins and minerals that may not be found in commonly eaten foods or those that are lost at the processing stage of foods such as wheat, maize and rice. Micronutrients can also be added as a premix to staples.

When it comes to vulnerable populations, such as infants, there have been strong results from food fortification programs. For example, in Ethiopia, micronutrient powders were added to complementary foods for children aged between six and 23 months in a poor community. In this community, the rates of anemia went down from 35.7 percent to 24.8 percent – an impressive amount for a malnutrition program, Kawuba says.

Besides a lack of government legislation and market regulation, several quality-related issues prevent the successful integration of fortified foods into many countries, such as a lack of industry compliance. The use of poor-quality, uncertified ingredients and premixes can have a major impact on the success of fortification programs, as well as putting individuals at risk. DSM aims to control the sources of raw materials, and monitor what goes into its blends to ensure that it can produce customized-country specific formulations that meet the highest standards, he explains.

A solution not without challenges
The African market faces the issue of low-quality premixes, Kawuba explains. Available premixes often lack the vitamins and minerals that are advertised on the label, for example. What may be promoted as a premix full of vitamin D and vitamin A, may, in reality, contain trace amounts of the micronutrients.

The lack of a level playing field in the African market is a strong driver behind the flailing qulaity levels, he notes.

“This is the case in markets where you don’t have strong regulatory bodies. If you implement a fortification program in an area facing a high burden of malnutrition, for example, and then you find that the level of malnutrition remains the same, it’s often because poor quality products are being used. People then start to doubt fortification.”

A success story
Amid the challenges facing companies working in combating malnutrition, one product has been quite the success story, notes Kawuba. 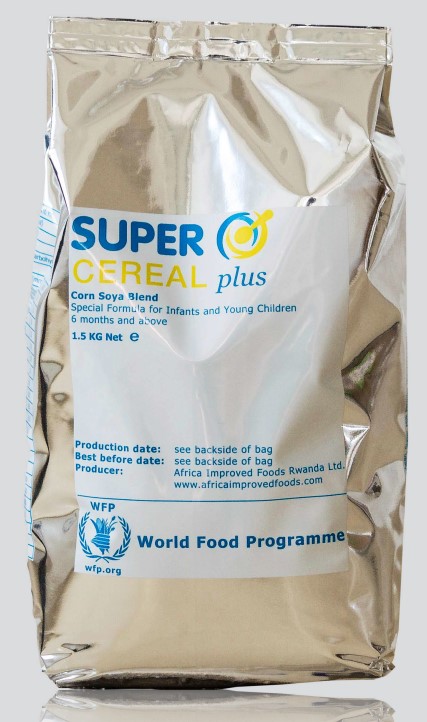 Supercereal+ is a fortified porridge that was developed by DSM, in partnership with the World Food Programme (WFP) to fight malnutrition among vulnerable populations. For years, hundreds of millions of dollars have been spent importing this product from Europe or the US. But now, local Rwanda-based company Africa Improved Foods (AIF) is the first African producer of the cereal, with over 70 percent of the price paid flowing back into the regional economy, “ensuring Africa can feed Africa.”

Because of this partnership among several stakeholders, it is estimated that AIF will contribute US$85 million to Rwanda’s foreign exchange position over five years, by producing a product that meets the highest global food safety certifications. Approximately 50 percent of the maize required (i.e. +/- 10,000 MT/year) is sourced directly from smallholder farmers in Rwanda while the remaining maize and other inputs (e.g., soybean, oil and packaging) are sourced mainly from Uganda and Kenya.

“We have brought our scientific expertise in vitamins and minerals and experience in nutrition intervention and used WFP’s reach to help change children’s lives for the better.”

This product is being supplied by WFP in the region, but other nutritious products produced by AIF are also on the supermarket shelves in Rwanda and Uganda, and the company is currently working to expand the model to other African countries.

Kawuba emphasizes the importance of partnership in improving nutrition, especially with the public and the private sectors coming together. “Partnerships are crucial to our success in providing nutrition solutions for the world’s most vulnerable populations.” Supercereal+ is one example of a partnership that has spurred strong results and more can come in the future.

Moving forward, engaging a wider group of people on the topic of malnutrition is important. Published this week, the Global Food Policy Report noted that in 2018, malnutrition jumped for the third year in a row, with 821 million people globally now facing chronic food deprivation.

There is a moral imperative to make sure nobody dies from malnutrition, which is the number one driver, Kawuba explains. But, discussing the economic potential of addressing hunger is also needed to engage with the people who can invest in nutrition programs at scale, like governments, he concludes.

DSM, UNICEF and nutrition think tank Sight and Life have revealed an extension of their partnership to address malnutrition on a global scale.

The Russian invasion of Ukraine will cause severe food insecurity globally, especially for women and children, according to a new multi-sourced expert analysis for the... Read More