You are in : All News > Key Interview: How the FODMAP Trend Could Affect the Dietary Fiber Market

Key Interview: How the FODMAP Trend Could Affect the Dietary Fiber Market 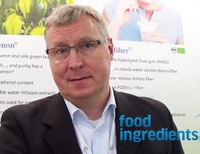 25 Apr 2017 --- The low FODMAP trend is making ripples in the nutrition industry, with Nestle recently launching its low FODMAP snack drink, “ProNourish” designed to help people with IBS snack easily, and get enough low FODMAP fiber on the go.

Today NutritionInsight talks to Dr Stefan Siebrecht, the Managing Director of Taiyo in Germany, who provided the low FODMAP dietary fiber, Sunfiber, which is used in the new nutritional drink. We chat about what opportunity the low FODMAP trend presents the company, and how the Sunfiber brand could profit from it.

The Early Uptake of the Low FODMAP Trend

Since one of its biggest clients, Nestle, launched a low FODMAP drink in the US, it seems that Taiyo has found itself benefitting from the early uptake of the low FODMAP trend.

However, Dr. Siebrecht is unsure of how far the FODMAP trend has come, saying, “this is the first product we have now from one of our biggest clients.”

He explains that because FODMAP is not a term that is very common at the moment, many people aren’t yet sure what it means.

“FODMAP – short for Fermentable, Oligosaccharides, Disaccharides, Monosaccharides And Polyols – is a very scientific term, so people aren’t that familiar with it,” he says.

Dr. Siebrecht adds that more and more people are recognizing that after eating something, they suffer from intestinal problems and discover that it could be caused by a FODMAP such as Lactose, Sorbitol or fast digestible fibers such as Fructo-Oligosaccharides (FOS). Then the term FODMAP then starts to mean something to them.

“Scientists are putting together a lot of research that show how fast fermentable sugars cause disturbance in the intestine, which in the long term, leads to a kind of inflammation.”

“This means people are getting more intolerant, so they’re unable to digest other foods well.”

He explains that it’s thought that FODMAPS are one of the main causes of IBS, adding that, “If it’s true that consumption of these FODMAPS long term can cause IBS and inflammation, then it’s a bigger problem then we always thought.”

Competing with Other Dietary Fiber in Low FODMAP Market

“The food industry is using Inulin rather a lot in candy, cakes, bread and meat just to give it the fiber health claim. The consequence of this is that people get more problems because they consume lot of inulin in so many different foods,” explains Dr. Siebrecht.

He goes on to explain how the need for a more gentle fiber could present Taiyo and Sunfiber with an interesting opportunity.

“Health officials advise IBS patients take Sunfiber,” Dr. Siebrech states, adding, “we even have a health claim in Canada for Sunfiber against IBS. Scientists find that Sunfiber can be safely consumed even by sensitive peopleup to 20g a day.”

He adds, “Many producers of dietary fibers worry now, about the Low-FODMAP trend as it could hit their products directly, but this is a trend that is good for Taiyo – we are profiting from it, and also the consumers as they start to get know aware of the negative influence of these FODMAP’s on their intestinal health.”

Despite the impact of too much FODMAP’s on IBS sufferers, the price differences within fiber segments places the cheap FODMAP’s in a more accessible position to the food industry.

“Sunfiber is a superior Low-FODMAP product but it also has a premium price, which is our problem,” explains Dr. Siebrecht. “FODMAP’s fibers are much cheaper fibers and that is the reason why they are so widely used.”

“So we think: how can we get to make better products enter the same applications as the cheap FODMAP’s? This is our threat, our shelf stopper. Better and healthier foods are often more expensive, and food that is more expensive is less consumed.”

However, Dr. Siebrecht thinks that the LOW-FODMAP trend could be the key to getting more food and beverage companies on board with Sunfiber.

“We’ll try now, using this trend, to convince some food companies that they can make a better product, by adding more LOW-FODMAP fibers to it, and consumers will be able to feel it because they’ll have no short term digestive problems and will benefit from long-term intestinal health.”

“And maybe they’ll be willing to pay a higher price for this product – instead of buying cheaper FODMAP fiber products which may cause them short term and long term problems.”

The Need for Easily Digestible Fiber in the Diet

Aside from the low FODMAP diet benefitting people with IBS, Dr. Siebrecht also thinks the general population is at risk of not consuming enough easily consumed dietary fiber, something that he thinks an uptake in consumption of Sunfiber could help solve.

“If you look at consumer questionnaires – the RDA of fiber is 30g grams a day. Even people who eat fiber rich diets normally eat between 20-25g, so they’re missing between 5-10% of the daily-recommended limit.”

“Many normal people, and especially people who consume a lot of junk food only consume between 5-10g of daily fiber.”

“So we don’t eat enough – why? Because it’s hard to get, and many people view fiber as too heavy, dry and hard to digest.”

He explains that without consuming fiber, our healthy gut bacteria has nothing to eat, which let them suffer and then slowly decrease which can result in many serious health issues.

“What do the gut bacteria eat when there is no fiber for them to eat? For example, 100% of a fiberless hamburger is digestible for our human body serving us lots of energy, but for our healthy gut bacteria the hamburger contains nothing good to serve them.”

“So the good bacteria are dying and the bad bacteria can grow on the leftovers of the hamburger, but there is no fiber. The bad bacteria then produce more toxins which causes inflammation and the healthy gut bacteria produce less  of the short chain fatty acids that the body needs, and that keep us healthy.”

“Therefore, its important to feed these good bacteria enough fermentable dietary fiber which helps to defend us against the bad bacteria.”

Dr. Siebrecht stresses, “But for this, we need to increase our dietary fiber content drastically. The 30g dietary fiber RDA is the MINIMUM fiber content that we have to eat every day, to maintain to get sick, but nobody knows the optimal fiber intake. Hundreds of years ago humans as hunters and gatherers approximately consume between 60 – 100 g of dietary fiber per day. Today we assume that we should consume between 5-20g fiber a day to fill the gap in the fiber RDA.”

“Someone who is eating only 5 grams dietary fiber a day has to supplement the rest - and this is very difficult.”

“If you would eat 20g of a high FODMAP fiber, your intestine would “explode”," he explains.

"You would produce so much gas and diarrhea, so a consumption of that high amounts of needed dietary fiber is almost impossible by using FODMAP fibers. Even if you try to eat full grain bread or cereals, it’s very hard fiber that also causes a lot of dietary problems, and is also often carries many carbohydrates with the fiber.”

Low FODMAP fiber could offer a solution to this issue.

“We have studies in Japan where people eat 60g of low FODMAP fiber a day and what happens is, that they lose weight, especially they lose abdominal fat. Low FODMAP fiber are slowly turned into short chain fatty acids which supply long term energy, they reduce hunger so they help to aid in weight management.”

“But these high amounts of daily fiber intake, between 20-60 grams a day, you can only get this if the fiber is very easy to digest and very gentle to your digestive tract.”

“Sunfiber is exactly one of these fibers,” he explains, “it’s gentle to the intestines, and it’s palatable.”

The Future of Dietary Fiber

Although a lot of the focus on Sunfiber lies with treating the physical symptoms of IBS, Dr. Siebrecht also thinks that the future benefits of the ingredient will revolve around other diseases and even on cognitive health.

He explains how new research from Dr Perlmutter, a brain neurologist from the US, suggests that by caring for gut microbes with fiber, consumers could protect themselves from, and treat, mental health conditions as well as physical ones.

“Dr Perlmutter analyzed diseases such as Parkinson’s, depression and so on, and found a connection between the intestinal microflora and brain health,” Dr. Siebrecht explains.

“The brain and the intestine are very connected. Many people with stressed guts such as IBS patients also often suffer from mental health issues such as stress, depression, insomnia etc. On the other side people with mental health problems often have stressed stomach and intestines. In the intestine a very large nervous system is located which we call the second brain or the intestinal brain. These two brains are connected and if you calm down one of these nervous systems also the other system calms down. We try to combine these benefits by using two of main ingredients on a new concept, which we call: Mind your gut! We combine L-Suntheanine (95% Natural L-Theanine) a relaxing amino acid with Sunfiber to calm down both brains, pour mind and our gut brain at the same to time to help people with mental and intestinal stresses brains.“

He finalizes, “This “mind your Gut” concept” is also a new trend that goes beyond the classical dietary fiber benefits and it also goes over the FODMAP Trend – FODMAP is a concept that targets the short term effect on the intestine, but if we influence our healthy gut microflora, then we influence central human health all over the human body and this can influence every other organ up to the brain.”

16 Mar 2021 --- In pre-pandemic times, many considered immune health to be a seasonal issue, targeting mostly seniors and vulnerable consumer groups. However, the COVID-19 pandemic... Read More