You are in : All News > Kappa Bioscience’s K2Vital becomes “benchmark” for MK-7 bioactivity

05 May 2022 --- Kappa Bioscience’s nature-identical vitamin K2 – K2Vital – is provided as a Reference Standard for the United States Pharmacopeia.

This means the ingredient’s all-trans menaquinone-7 (MK-7) form will be used as a benchmark for K2 analysis and cis/trans assessments to establish vitamin K2 product purity.

NutritionInsight speaks with Maren Janecke, director of sales and business development at Kappa Bioscience, about how setting standards can boost the budding K2 segment. She also discusses what makes the all-trans MK-7 form the optimal molecule for cardiovascular, immunity and bone health.

Setting industry benchmarks for purity
The Reference Standard plays an important role industry-wide, as it raises the standards for manufacturers worldwide, not only in purity but also efficacy, explains Janecke.

“Nobody wants a vitamin K2 product that doesn’t work, but ineffective products with low bioactivity are stopping consumers from seeing the results they’re looking for.”

For example, the trans form is crucial in vitamin K2 supplements because its linear configuration makes it highly bioactive, Janecke underscores.

“The cis form, put simply, is a key that doesn’t fit, and that leaves K2-dependent enzymes and proteins inactivated.”

She stresses that brands need to ensure that the isomeric purity is tested as a product with 100% K2 content can be “useless” if it is only cis-MK-7.

“Appropriate and standardized testing is essential.” 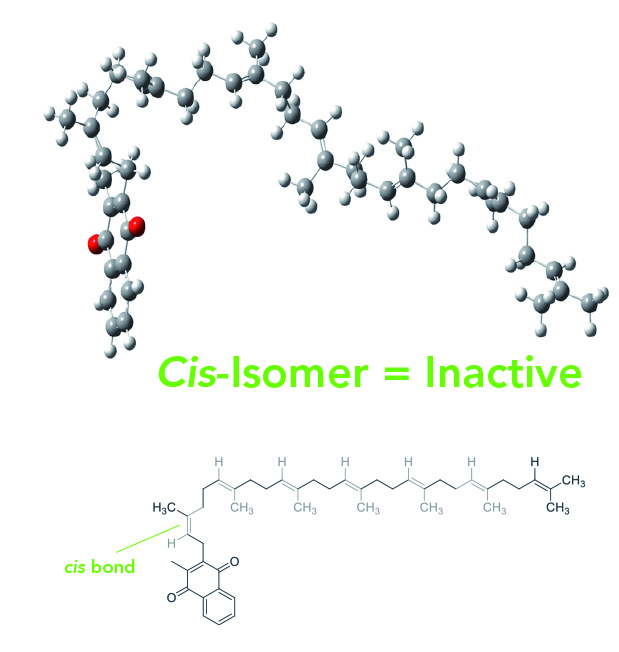 Trans and cis isomers have different molecular structures, which determine their bioactivity (Credit: Kappa Bioscience).
K2 now in the major leagues
Janecke notes that while vitamin K2 is still fairly fresh on the nutritional market, it is growing rapidly.

She relays that MK-7 has achieved a 7% to 10% market penetration in ten years. By comparison, the now mainstream vitamin D took several decades to reach the same milestone.

In addition, the synergistic relationship between vitamins D and K2 MK-7 has resulted in “exceptional growth and a new vitality in the vitamin’s trajectory.”

“K2 is now in the major league of vitamins. Market research is showing that consumers understand the function of the ingredient, generating higher purchasing interest and pushing vitamin K2 along to the top of its market.”

The global pandemic may have also pushed the ingredient forward, as several studies examined K2 levels in patients infected with SARS-CoV-2. In one, researchers found that vitamin K2 status was predictive of COVID-19 mortality.

Vitamin K1 is naturally occurring in green leafy vegetables, but K2 is difficult to obtain through the modern Western diet alone.Not so subtle differences between K vitamins
Establishing the right form of vitamin K in supplements is critical to reaching its target effect and maintaining market momentum.

“Vitamin K has caused concern in the past, with fears that too much of the nutrient could increase the risk of blood clots,” explains Janecke. “But Vitamin K2 is not vitamin K1.”

“Vitamin K1 acts primarily in the liver, while vitamin K2 develops its full spectrum of action outside the liver through transport via LDL (low-density lipoprotein) particles.”

“The exceptionally long half-life of Vitamin K2 as MK-7 and the different transport mechanism explain why vitamin K2 is much more effective than vitamin K1 for all effects outside the liver.”

Moreover, vitamin K1, the phylloquinone form, can be found abundantly in foods, such as leafy green vegetables.

In contrast, menaquinones – or vitamin K2 – come from animal products and fermented foods and are difficult to obtain through the modern Western diet.

Selecting for MK-4 or MK-7
Janecke elaborates that the most widely known menaquinones are MK-4 and MK-7.

“Their biological function is similar, but the key differentiating factors are tissue distribution and half-life – the time measurement of how long that compound remains in the body.”

MK-4 has an average bioavailability and short half-life of one to two hours. The nutrient is rapidly processed, so unsuitable for once-daily intake, and high amounts are required to have a significant effect.

Vitamin K2 MK-7, on the other hand, has high extrahepatic activity and benefits bones, immunity and cardiovascular health.

“MK-7 has an above-average bioavailability and an unmatched half-life of 72 hours. It can get to work from a tiny dose of just 75-200 µg.”

Vitamin K2’s suggested dosage is being revaluated in light of new research on its synergy with vitamin D.No dietary reference or daily value
Establishing a reference of purity puts K2 on track to widespread adoption. But some hurdles still remain, such as the lack of a recommended daily intake (RDI).

“This is not unusual, given the relatively ‘young age’ of vitamin K2,” says Janecke.

“Any new ingredient requires several years of research before a reference value can be authorized.”

While she expects a few more years to pass before vitamin K2 is found in daily multivitamins, the path to an established reference value is well underway.

“Fascinating research is currently ongoing that will bring breakthroughs to the RDI, especially cross-referenced to vitamin D and additional health claims for K2 as MK-7.”

Establishing levels in tandem with vitamin D
Perspectives on how to dose K2 are changing as new research comes to light.

“At first, the general rule was 1 µg of vitamin K2 per kilogram of body weight, says Janecke.

However, the results of several new studies on the effects of vitamin K2 MK-7 on immune health, along with increased awareness around its relationship with vitamin D, have changed the conversation.

“We’re also looking forward to seeing the results of studies on the effects of 500 µg per day of K2 MK-7, which are currently taking place.”

Last June, NattoPharma initiated a clinical study with the highest dosage of K2 MK-7 to date on patients with chronic kidney disease. The 1 mg dose is expected to demonstrate safety, even in vulnerable populations.

Kappa Bioscience is producer of premium K2VITAL® vitamin K2 MK-7 and microencapsulated K2VITAL® DELTA for stability in mineral formulations. Vitamin K2 supports Bone health by activating the proteins that incorporate calcium into bone, and prevent excess calcium from deposit in vessels and arteries. K2 compliments top-selling D3, Ca, Mg and Omega-3 in a wide variety of dose formats. Kappa is the publisher of the K2 Formulation LookBook – a complete primer on K2 plus 120+ ready-to-launch formulations.

Kappa Bioscience has the vision to deliver vitamin K2 to the mass market, making it accessible for everybody, everywhere. Positioned for unlimited-scale market opportunities, Kappa Bioscience offers you a strong partner in the development of new market growth with K2VITAL®.

Gene-edited crops, such as tomatoes rich in vitamin D3, may soon be on English supermarket shelves following a bill that will be introduced tomorrow. Departure from the... Read More

Vitamin D food fortification works better with water and milk than with juice, according to a new study presented at the 24th European Congress of Endocrinology in... Read More

Synthetic versus natural ingredients: more than meets the eye

A “first of its kind” study carried out across five EU countries has revealed the combination of vitamin D3, omega 3 and exercising can have cancer... Read More