You are in : All News > Glycom CEO predicts HMOs for adults will reign following leaky gut investigation

15 Sep 2020 --- The adult use of human milk oligosaccharides (HMOs) has the potential to become even bigger than current infant formula usage, according to Odd Hansen, Glycom’s CEO.

He speaks to NutritionInsight alongside Nathalie Juge, who is the co-author of a new study from Glycom and the Quadram Institute, UK. The researchers discovered that two HMOs – 2′-Fucosyllactose (2’FL) and lacto-N Neotetraose (LNnT) – can help prevent celiac disease, Crohn’s disease and irritable bowel syndrome (IBS) in adults by making the gut lining less “leaky.”

Glycom’s commercialized HMO products target IBS and general digestive health.“The focus to date has been on infants, as HMOs dominate the healthy infant gut microbiota. There is no reason why [transferring HMOs to adults] can’t be done,” says Juge.

Moreover, Hansen adds that HMOs for adults’ and children’s use is an opportunity that will likely become “as large or larger than the more established use in infant formula.”

Making a case for HMO adult supplementation
HMOs for adults are slowly but surely coming to market. In April, DSM completed a €765 million (US$826 million) acquisition of Glycom, which opened up new avenues in HMO production.

“Since the acquisition, we have been working actively together, leveraging the combination of the HMO insights from Glycom and the broad gut health, dietary supplements and medical nutrition competencies at DSM.

“[This allows us] to further accelerate the introduction of HMOs for a broader audience in appealing and effective solutions. Glycom/DSM is currently working with several DSM customers to launch supplements globally for both adults and children,” Hansen explains.

“Both launches build on the [Quadram Institute] study insights. They helped us get a step further to understand the mechanisms of HMOs, and how they beneficially impact the human body – not only in infants, but potentially also in adults,” Louise Vigsnaes, head of HMO biology at Glycom/DSM, also tells NutritionInsight. 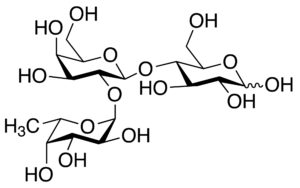 The chemical structure of 2’Fucosyllactose (2’FL).Study parameters
The research team used an in vitro gastrointestinal model called Simulator of the Human Intestinal Microbial Ecosystem (SHIME) to investigate the influence of HMOs on adult gut microbiota composition and function.

2′FL and LNnT, were supplied by Glycom as white, free-flowing powders of synthetic origin at 94.7 percent (2′FL) and 97.7 percent (LNnT) purity, respectively.

These were then seeded on chips to generate Colon Intestine Chips, which were cultured under microfluidic conditions to recreate the intestinal epithelium’s structure and function. Using this system, they showed a significant increase of certain tight-junction proteins across all three gut-on-chips following treatment with fermented 2-’FL.

More research greatly needed
There is a gap in the scientific understanding of how certain HMOs can target specific health conditions. Filling this gap would allow product manufacturers to develop and receive approval for health claims, adding value to their products.

The practical research obstacle in this study was a lacking suitable in vitro model to investigate the impact of specific ingredients on the gut microbiota structure and function, says Juge. This was, however, overcome by using a combination of in vitro and ex vivo models based on human samples.

Extensive and longitudinal studies are further required to assess the potential protective role of HMOs in healthy adults, as for the field of prebiotic/probiotics, she adds.

“The question is now, are other structures of the HMOs able to have a similar impact or is the effect structure-specific? And how does this differ across health conditions?” Hansen concludes.

Food for our microbiome: Human microbes found to feed on plant sugars in gut

A carbohydrate commonly attached to plant proteins is a food source for the bacteria in the gut, new research suggests. Species of gut microbes have been found to use... Read More

Lallemand is partnering with the French Gut Project to innovate in health and science by driving microbiota science forward. The project aims to collect and analyze... Read More