You are in : All News > Gluten-free mainstreams: Is the trend leading to unhealthy weight control?

Gluten-free mainstreams: Is the trend leading to unhealthy weight control?

Gluten-free food offerings have gained a strong foothold in the marketplace over the past years. Innova Market Insights data has shown that gluten-free claims saw average annual growth of +24 percent between 2013 and 2017.

Researchers from the University of Minnesota found that among young adults, valuing gluten-free foods could be indicative of an overall interest in health or nutrition. These young adults were more likely to engage in healthier behaviors including better dietary intake and also valued food production practices (e.g., organic, non-GMO, locally sourced).

However, they were also more likely to engage in unhealthy weight control behaviors and over-concern about weight.

Click to EnlargeThe study, published in the Journal of the Academy of Nutrition and Dietetics, looked at a sample of 1,819 young adults 25 to 36 years old from the Project EAT longitudinal cohort study. They measured whether they value gluten-free food, weight goals, weight control behaviors, food production values, eating behaviors, physical activity and dietary intake.

Approximately 13 percent of participants valued gluten-free food and these individuals were four to seven times more likely to value food production practices such as organic, locally-grown, non-GMO and not processed. There was also an association between using Nutrition Facts and having a weight goal and valuing gluten-free foods.

These data show that while eating gluten-free can be associated with an overall interest in maintaining a healthy lifestyle, it might also indicate a harmful preoccupation with weight loss and/or behaviors that are perceived to promote weight loss. Researchers found that valuing gluten-free food was three times higher for young adults engaging in unhealthy weight control behaviors.

“I have concerns about the increasing number of people who perceive that eating a gluten-free diet is a healthier way to eat. Of particular concern is the higher risk for those engaging in unhealthy weight control practices for perceiving a gluten-free diet as important, given that eating gluten-free, may be viewed as a ‘socially acceptable way’ to restrict intake that may not be beneficial for overall health,” notes lead investigator Dianne Neumark-Sztainer, PhD, MPH, RD, professor and head, Division of Epidemiology and Community Health, University of Minnesota.

Consumer interest in gluten content fits squarely with the growing trend of consumers looking for a lifestyle pattern and diet that “work for them.” According to Innova Market Insights, consumer study results illustrate the extent of the trend. In fact, 4 in 10 US and UK consumers claim to have increased their consumption of “healthy foods” (2017). Product launch activity has followed suit, with better-for-you related claims (health claims, clean label claims and free from claims) having increased their market penetration from 42 percent in 2012, to 49 percent in 2017. 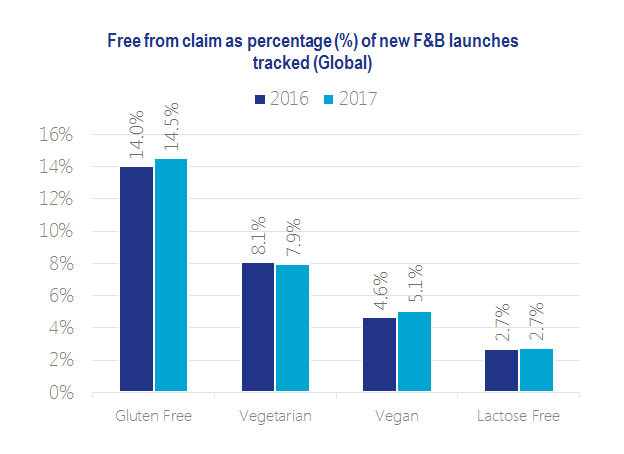 Click to EnlargeAccording to the researchers, the gluten-free surge, in particular, is part of the “health halo” effect, whereby consumers believe that because a food lacks a certain ingredient or has a specific label, that food is automatically “healthy.”

“Products labeled as ‘low sodium,’ ‘natural’ and ‘free from’ certain food components or characteristics may be interpreted by consumers as being healthier overall,” explains lead author Mary J. Christoph, PhD, MPH, postdoctoral fellow, Department of Pediatrics, University of Minnesota. “The health halo effect can have unintended consequences on eating habits, such as people overconsuming because they believe they have chosen a healthier product.”

Investigators did find that individuals who valued gluten-free foods were more likely to eat a higher quality diet. Although dietary intake did not meet most guidelines, these participants were more in sync with the Dietary Guidelines for Americans, including consuming more fruits, vegetables, and fiber, less sodium and a smaller proportion of calories from saturated fat.

The data did show that there was no difference in whole grain intake between those who valued gluten-free foods and those who did not.